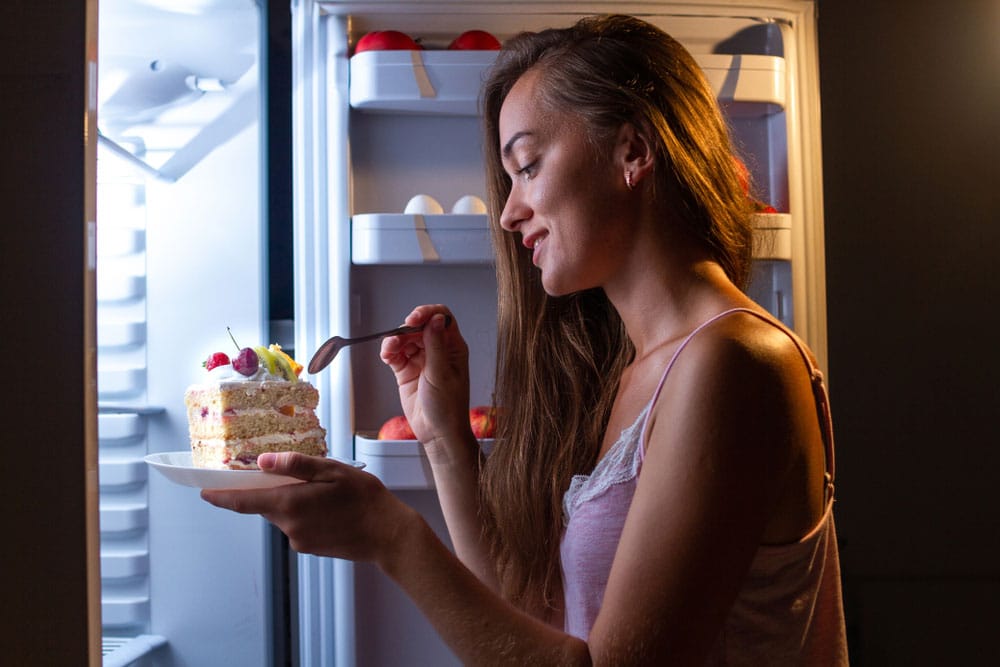 Do you enjoy a nighttime snack before bed? Some dietitians will tell you to shut down the kitchen after dinner and let your body fast until morning. Preliminary studies suggest that intermittent fasting, depriving your body of food for at least 14 hours, has health benefits. For one, it appears to turn on autophagy, the elegant process cells use to clean up old, damaged proteins. No doubt, your body and the cells it’s composed of, need a rest and a chance to do some housecleaning. Not snacking after dinner and eating a late breakfast gives your body a break from having to process food and may have benefits for your health. Some studies suggest that intermittent fasting helps with weight loss and protects against type 2 diabetes, although more research is needed.

Some Bedtime Snacks Are Better Than Others

But what if you can’t resist having a nighttime snack? Hold off on the cookies and ice cream. According to the new study, the composition of the snack you eat prior to bed matters. If you’re exercising regularly and trying to keep your weight down and limit belly fat, you don’t want to snack in a way that stymies fat metabolism and fat breakdown. During a period of fasting, as when you’re sleeping, glycogen stores dwindle, and your body turns more to fat as a fuel source. But if you grab a sugary snack before bedtime, you provide your body with a readily available form of glucose. Insulin levels rise, fat burning is diminished, and the body shifts to fat storage. That’s not what you want. Ideally, you want your body to burn fat as a fuel source when you’re trying to get lean.

But what if you ate a protein snack before bedtime instead of a snack high in carbs? Does the composition of your nighttime snack matter? In the study, researchers asked women who lifted weights regularly to drink a protein shake that contained casein 30 minutes after a workout. Thirty minutes before bedtime, they drank another shake that contained no protein as a placebo. Then, they switched the sequence, so they got the placebo shake after a workout and the protein shake before bed.

Of course, this study looked at women who lift weights. It’s not clear whether the results would be the same in inactive women. However, it suggests that the best kind of nighttime snack is a protein snack rather than one high in carbs. At least in active women, consuming a high-protein snack after dinner doesn’t negatively impact fat metabolism.

Could a Nighttime Snack Be Beneficial?

In fact, research suggests that consuming protein before bedtime might be helpful to guys and gals who lift weights. In one study, older men who exercised at night and consumed 40 grams of protein just before bed experienced greater muscle protein synthesis. An overnight fast can kick your body out of an anabolic state and into a catabolic one. Consuming protein before bedtime may reduce muscle breakdown. A protein snack before bed may be beneficial for older men and women who have a higher degree of anabolic resistance.

Another study in younger men who weight trained found that those who consumed 40 grams of protein in the form of casein a half-hour before sleep had increased rates of muscle protein synthesis. Some studies also suggest that consuming protein after a workout and at bedtime enhances the rate of muscle recovery. Plus, protein may prevent a negative impact on immune function when you train hard. There’s also some evidence that consuming moderate protein (30 to 40 grams) at bedtime modestly boosts metabolism.

If you eat after dinner, choose your snack wisely. Protein is your best bet. Avoid refined carbs and sugar as they have the greatest impact on insulin release. That’s important since insulin blocks fat breakdown. You don’t have to consume a protein shake. Instead, snack on a serving of cottage cheese or an egg. In fact, eggs are the gold standard against which other protein sources are measured since it is deemed the highest quality source of protein. You don’t have to go to bed hungry, just choose what you snack on carefully.

Also, be aware that snacking in the evening can negatively affect your sleep as it makes it harder for your body to kick into sleep mode. If you have problems falling or staying asleep, try eliminating after dinner snacks entirely and see how your body responds. Some sources recommend eating the biggest meal around midday and keeping dinner light, less than 500 calories. That way your body doesn’t have to shift its resources toward digestion when you’re trying to fall asleep.

All in all, a nighttime snack isn’t off-limits, but keep it small and avoid refined carbs or sugar. Of course, that’s a good strategy for health in general! Choose your meals and snack wisely and don’t overeat later in the day. If you snack, make sure it’s high in protein.

·        The Journal of Nutrition. “Lipolysis and Fat Oxidation Are Not Altered with Presleep Compared with Daytime Casein Protein Intake in Resistance-Trained Women” August 27, 2019.

Late-Night Snacking: is It Linked with Weight Gain?