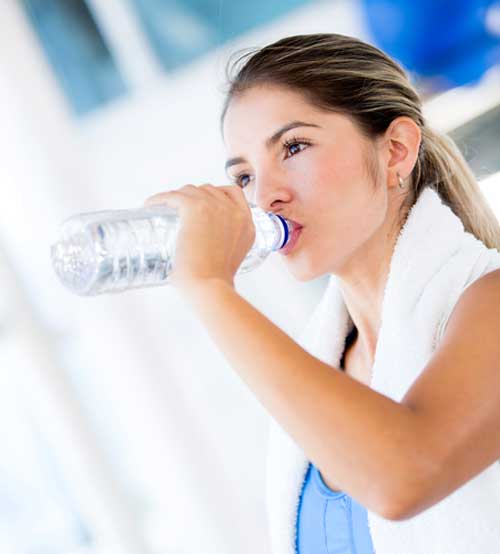 Exercise places considerable stress on your body. Preparing for a workout beforehand ensures your body has the reserves it needs to counter that stress. Not only does your body need carbohydrates to fuel a workout, but it also needs to be properly hydrated. Water makes up 60% of your body weight. Here are a few of the reasons you need water:

With such important functions, you can see why hydration is so important. Not surprisingly, fluid requirements go up during exercise. Exercise raises your core body temperature, sometimes rapidly depending upon the intensity of the exercise and the temperature of the area you’re exercising in. Sweating is the most important mechanism your body has for releasing heat. If you don’t hydrate enough, your body can’t sweat as efficiently and your core body temperature rises.

Being poorly hydrated when you exercise in a hot environment puts you at risk for heat illness like heat exhaustion and heat stroke – but how does it affect your workout? Exercise certainly FEELS harder when you don’t drink enough fluids – but does it impact exercise performance?

What happens when you don’t drink enough fluid during exercise? As the volume of fluid in your body falls, your blood volume also goes down. As a result, your heart pumps less blood with each heartbeat. To compensate for the drop in blood volume, your heart rate increases and your heart has to work harder. Due to dehydration, your heart has become less efficient at pumping blood to your heart-working muscles and to the rest of your body. You also can’t release heat as efficiently. As a result, exercise itself feels harder, you fatigue more quickly and your performance drops off.

Even mild dehydration can negatively impact exercise performance. Dehydration of only 2%, corresponding to a 2% loss of body weight, reduces performance by an average of 15%. Two percent dehydration is the level of dehydration at which most people begin to feel thirsty. That’s why thirst is a very poor indicator of hydration status. By the time you feel thirsty, you’re already feeling the effects of dehydration. One study showed aerobic capacity (V02 max) declined by 5% at fluid losses of 3% of body weight even in a cool environment. If you combine this with a hot environment, aerobic capacity can be reduced by 7% or more. That’s a significant reduction!

Another study showed resistance training in a dehydrated state increased it had a negative impact on fat metabolism, reduced testosterone release in response to training and increased levels of stress hormones like cortisol. High levels of cortisol – that’s something you don’t want if you’re trying to build or preserve lean body mass. No matter what type of exercise you’re doing, even mild dehydration makes it harder. Focus on staying hydrated!

If you’re doing a workout that lasts more than 60 minutes, especially if you’re exercising in a warm environment, drink an electrolyte-rich beverage to replace the sodium, potassium, and chloride you lose through sweating. During prolonged exercise, 90 minutes or more, you can lose a significant amount of sodium. If you drink plain water, you’re replacing fluid but not sodium. Marathon runners sometimes develop a low sodium level as a result of drinking plain water during a marathon. A low sodium level can be dangerous and even deadly. Drinking an electrolyte-rich drink during prolonged exercise helps prevent this.

After your workout, focus on compensating for any fluid deficits. If you’ve exercised for more than 60 minutes, especially in a hot environment, rehydrate with a drink that contains carbohydrates and electrolytes. Carbohydrates will replenish your glycogen stores and help with the absorption of electrolytes. How do you know if you’ve successfully compensated for your fluid losses? Your urine should be light yellow in color.

Some research suggests “hyper-hydration,” drinking beverages that contain large amounts of sodium or consuming drinks with glycerol that “bind” water, improves performance during endurance exercise. Having larger amounts of fluid in your body to absorb heat helps reduce the rise in core body temperature during exercise. The drawback is you may feel “heavy” or bloated. Unless you’re participating in a competitive endurance event, super hydration probably isn’t necessary. Just focus on staying adequately hydrated during your workouts and then replacing fluid deficits once you’ve finished.

Being even mildly dehydrated during exercise makes exercise feel harder and affects your performance. If you want to maximize your workouts, don’t underestimate the importance of getting enough fluids.

Weight Training: Does Hydration Affect How Strong You Are?