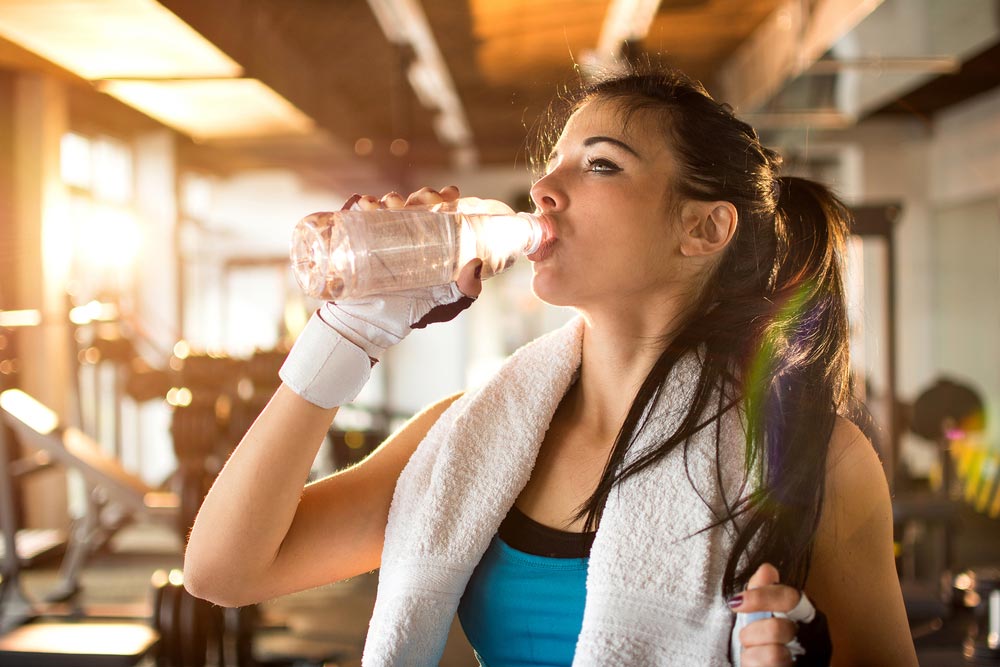 Your body and its many cells depend on water for all their critical functions. In fact, more than 60% of your body is composed of water. You can survive a few weeks or more without food, but you’ll die in a few days without water. Water is in your bloodstream and within each cell in your body where it plays a powerful role in vital functions, like transporting, nutrients and gases, maintaining proper electrolyte balance, controlling body temperature, and preventing a rapid drop in blood pressure.

To make matters worse, many people walk around in a state of chronic, mild dehydration and even begin an exercise session that way. A study carried out by researchers at Gatorade found that 40% of people are at least mildly dehydrated at the start of an exercise session. Once you begin exercising, you’ll lose even more water, as fluid demands rapidly rise during exercise, especially if you’re working out intensely or in a hot or humid environment. We know that dehydration can negatively impact performance during endurance exercise – but what about resistance training? Does hydration have an impact on muscle hypertrophy gains as well?

One way in which mild dehydration could reduce muscle gains is by decreasing the strength you can generate when you lift. If you’re consistently dehydrated when you train, you might not be able to lift as much as you would if you were well-hydrated. So, over the long term, your muscle gains might be limited. However, a study published on Medscape found that not hydrating adequately didn’t significantly impact strength generation when participants lifted a single rep using a weight equivalent to their one-rep max. Mild dehydration also doesn’t appear to impact the ability to generate power.

But, don’t dismiss the importance of hydration for muscle hypertrophy just yet! Based on the Medscape study, insufficient hydration does seem to impact resistance training when an individual does multiple reps and sets. In the study, even mild degrees of dehydration reduced performance when participants completed multiple sets of resistance exercises. That’s not surprising since dehydration is known for causing fatigue, and not drinking sufficient water can increase the perception of how hard you’re working as well. In other words, doing four or five sets of an exercise might feel harder when you didn’t drink enough liquid beforehand. So, you might stop prematurely or do fewer sets. The upshot is you might have trouble doing as much volume when you aren’t drinking sufficient water.

Even though power generation may not be impacted significantly by mild dehydration, less than 3%, research shows that greater degrees of dehydration CAN have an impact. In fact, more than one study shows that a 3 to 4% reduction in body water, reduces the ability to generate power. One study found that 3-4% dehydration impacts anaerobic performance, whereas endurance performance is affected earlier, at around 2% dehydration, a level at which you might not even feel thirsty. Another concern is that heart rate recovery is delayed by mild dehydration. Your heart rate doesn’t return to its resting rate as quickly when you don’t have enough fluid in your blood vessels.

What about Muscle Hypertrophy?

Since the volume of training is important for muscle hypertrophy, limiting volume due to dehydration could, over time, reduce the muscle gains you get from resistance training. Makes sense, doesn’t it? We can’t give training our best effort when we’re not well hydrated. When you’re even mildly dehydrated, you might feel tired, have a mild headache, and not feel as motivated to train. Plus, your heart has to work harder when you’re dehydrated, and your heart rate will speed up more with exertion. Heart rate recovery will also be delayed.

In addition, when you lift weights, you push water out of muscle cells. One study found that insufficient intracellular water can reduce the synthesis of new muscle proteins – another way in which poor hydration could limit muscle growth. Everything works more smoothly when you’re hydrated.

Chances are you pay more attention to hydration when you’re doing endurance exercise or a HIIT session than when you’re strength training. But, it’s important for both! You can’t depend on thirst to be a reliable indicator since you’re already mildly dehydrated by the time you feel the urge to drink. So, follow these guidelines:

How do you know if you’re drinking enough? Weigh yourself before and after a training session. If you weigh less after your workout, you’re low on water. For every pound that you’re down, drink 16 ounces of fluid. The color of your urine is another indicator. Normally, it should be pale yellow or lighter. If it’s darker, you need to drink more.

Hydration matters! Whether it directly impacts muscle protein synthesis still isn’t clear, although there is a suggestion that it does. But, being even mildly dehydrated may reduce the total volume of training you can do when you work with weights – and that, over time, may reduce the gains that you get and muscle hypertrophy. So, make sure you’re following hydration guidelines and not starting a workout already dehydrated.