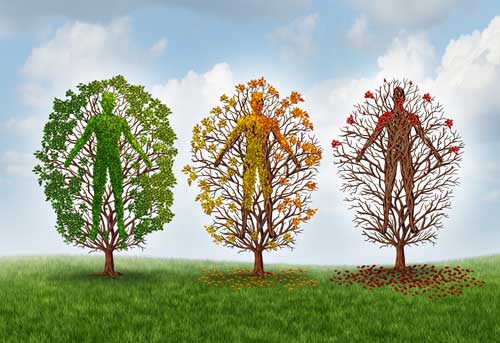 You’d like to think you have control over your destiny but ultimately age catches up to you. It happens to everyone, although at varying rates depending upon lifestyle and genetics. When you choose a healthy lifestyle, you’d like to think you’re slowing the aging process and this will ultimately lead to a long and healthy life. Of course, this raises the big question – how much control do we really have over the aging process?

Can you really change the rate at which your skin ages? A study that followed two identical twins who had different lifestyle habits showed dramatic differences in the way each looked based on their individual environmental and lifestyle exposures. One twin had areas of dark pigmentation due to sun damage and obvious wrinkling while the other had smooth, youthful-looking skin. Since their genes were identical, the differences were due to extrinsic aging.

In fact, intrinsic aging accounts for 10% of skin aging. That means 90% of skin aging is due to environmental exposure. If you’ve ever looked at the skin of a smoker or sun worshiper, you’ll quickly see the impact environment has on the aging process.

If skin aging is so heavily influenced by lifestyle – what about the aging of your body as a whole? Interestingly, some of the same processes that cause skin aging also contribute to whole body aging. In fact, studies show a correlation between how young someone LOOKS and how young they are on the inside, based on measurable markers of aging. So, if you look younger for your age than your friends, you may be aging more slowly on the inside too.

What causes humans to age is a ten-million-dollar question. Despite the lack of a definitive answer, there are a number of theories. Just as a new car becomes damaged the more you drive it, our bodies gradually accumulate wear and tear over time. Oxidative stress and exposure to free radicals probably play a role, although taking antioxidant supplements won’t necessarily slow down the aging process or prevent disease.

How do free radicals create their havoc? They harm cells and the crucial structures inside, including the energy-generating powerhouses, called mitochondria. Anti-aging research is increasingly pointing to mitochondrial damage as a contributor to aging. Since your mitochondria produce ATP and ATP supplies the energy your body needs to function, this partially explains why we have less stamina as the years go by. Our mitochondria become less efficient at producing energy.

Some experts also believe that inflammation plays a role in aging. When cells in your body become damaged, they stop dividing, but they don’t completely go away. Instead, they begin to make chemicals called cytokines that trigger inflammation. As damaged cells producing cytokines accumulate, your body develops low-grade inflammation that contributes to aging.

Some research suggests that short-term fasting may slow down the aging process. At least in some animal species, this seems to delay aging and prolong life. It’s not clear whether it does the same in humans. Calorie restriction, cutting calories by 20 to 40%, may have the same benefit based on animal research. Here’s an interesting thought. In the future, you might be able to pop a pill to get the effects of calorie restriction without depriving yourself. Scientists have developed a drug called rapamycin that prolongs life in mice by up to 30%. It’s still not clear what effect it will have on humans.

What about WHAT you eat? One measure of how fast a cell is aging is the length of its telomeres, the tiny end caps on chromosomes. One study showed women who ate a Mediterranean diet, a diet rich in whole grains, fish, nuts, olive oil, vegetables, and legumes, had longer telomeres. The benefits the Mediterranean diet had on telomere length were significant. Those who followed a Mediterranean diet most closely could expect to age almost 5 years slower compared to those who least followed the Mediterranean eating style. The composition of the Mediterranean diet with its abundance of whole foods and healthy fats makes it the ultimate anti-inflammatory diet, and as we know, inflammation plays a role in aging.

The Role of Exercise in Aging

If there’s one powerful anti-aging hack in your arsenal, it’s exercise. Why does exercise have benefits? For one, exercise naturally reduces the inflammation that increases as we age and it may even help prevent oxidative stress and free radical damage, a possible contributor to aging. A study published in the journal Circulation showed exercise reduces markers for inflammation. Although intense exercise temporarily boosts inflammation and the production of free radical production, over time it increases your body’s natural antioxidant defense system, giving you greater ability to counteract free radicals. It’s another way your body adapts and becomes stronger and more resilient to the stress you place on it.

Endurance exercise also increases the number of mitochondria inside muscle cells and helps the ones that are present be more efficient. This helps you maintain stamina as you age. Plus, exercise is just what the doctor ordered for brain health. Research shows aerobic exercise stimulates the release of a hormone called brain-derived neurotrophic factor, or BDNF, that stimulates new nerve pathways. BDNF even seems to promote the development of new neurons while reducing brain shrinkage. We lose brain volume with age, especially in a region called the hippocampus, but exercise helps to counteract this problem. The hippocampus is involved in emotions and processing memories.

In terms of skin aging, protect your skin against environmental damage by wearing sunscreen, but make sure you’re getting enough vitamin D as well. Vitamin D and the mineral zinc are strongly linked with the regulation of the immune system and may help rein in inflammation that contributes to aging.

Yes, time flies, but you’re the pilot of your own time. Live healthy so you can enjoy it!

Time magazine. “Here’s Why You May Be Aging Faster Than Your Friends”

Scientific American. “Ask the Experts: Can Aging Be Controlled?”

Live Science. “Live Longer: The One Anti-Aging Trick That Works”

How Exercise Slows Down Aging