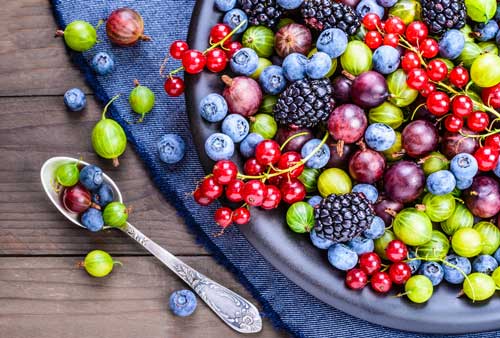 Ah, the power of antioxidants! It’s they that fight cell-damaging molecules called free radicals. Free radicals are unruly molecules that play a role in chronic diseases and aging. Their arch nemesis is antioxidants, the knights in shining armor that protect cells in your body against the damaging mayhem that free radicals create.

Antioxidants are abundant in plant-based foods. In fact, plant foods have 64 times more antioxidants than what you find in meat and dairy. It’s common knowledge now that antioxidants have health benefits – but here’s the question. Can you get TOO much of a good thing?

It’s hard to deny the health benefits that plant-based foods offer. Numerous studies show that foods of plant origin are linked with a lower risk of health problems, including heart disease type 2 diabetes, and some forms of cancer. We’re quick to attribute these benefits to the abundant antioxidants in plant foods but plants contain a complex blend of compounds, called phytochemicals, that have health-protective benefits. Can you attribute all of their benefits to their antioxidant properties?

It makes sense that furnishing a cell exposed to free radicals with electrons would be beneficial. Yet, paradoxically, some studies show that taking antioxidants in supplement form offers no health benefits and, in some cases, are harmful. For example, a study in smokers showed those who took antioxidant supplements (vitamin E and beta-carotene) actually had a higher risk of developing lung cancer.

When antioxidants are seemingly so beneficial, how can you explain this paradox? According to Drs. Cleva Villanueva and Robert Kross who have published studies on antioxidants, foods contain a rich blend of antioxidants. These antioxidants work together to protect cells against damage by their “cascade” effect. One antioxidant donates its electrons to another and on down the line. In turn, the antioxidant that donated an electron receives one to preserve its stability.

It looks like nature has provided us with multiple types of antioxidants in plant foods for a reason – so they can work together to offset the type of cell damage that can lead to health problems and aging. When you get too much of a particular antioxidant, you throw this balanced system out of whack.

The Impact of Antioxidants on Exercise

What impact do free radicals have on exercise? You produce free radicals when your body is under stress. One type of stress that boosts free radical production and oxidative stress is exercise. You might assume that the best time to flood your body with antioxidants is before a hard workout. After all, some research suggests that high levels of antioxidants may reduce muscle soreness. There is some evidence that this is true, but less muscle soreness may come with a downside. Studies suggest that having large quantities of antioxidants in your system during a workout interferes with the training response to exercise.

So, exposing your cells to large quantities of antioxidants may reduce some of the fitness benefits you get from aerobic exercise – but what about resistance training? Surprisingly, antioxidants may be a hindrance here too.

In a study, weight-training men and women took antioxidant supplements (1,000 mg. of vitamin C, 235 mg. of vitamin E) while another group did not. Each did four high-intensity weight-training sessions each week for 10 weeks. When the researchers biopsied their muscles, they found those who had taken the antioxidant supplements developed slightly less strength. Although both groups gained muscle size, the antioxidant group had developed muscle tissue of poorer quality with fewer contractile units. They also had fewer signaling molecules that go along with muscle protein synthesis.

What does this mean? Taking antioxidants before an endurance OR resistance workout may interfere with positive adaptations your body makes to exercise training. In the case of endurance training, the formation of new mitochondria, and with resistance training, strength gains.

Plant Foods Are the Best Source of Antioxidants

What can you take away from this? The best way to get your antioxidants is through diet, not antioxidant supplements. Antioxidant supplements come in a variety of forms. Vitamin C, vitamin E, and beta-carotene are three you’re probably familiar with, but the minerals manganese and selenium also have antioxidant activity. Three other antioxidants available as supplements are coenzyme Q10, green tea extract, and alpha-lipoic acid. Although not all of these supplements have been thoroughly tested, research shows that taking vitamin C, E, or beta-carotene in supplement form doesn’t protect against chronic disease and they may be harmful. Also, you probably shouldn’t load up on antioxidants, either dietary or in supplement form, prior to a workout. The potential for antioxidants to interfere with exercise adaptations is a real possibility.

Antioxidants you find naturally from food sources like fruits, vegetables, whole grains, and nuts are designed to work in context with other antioxidants and phytochemicals in the plant. Research DOES support the benefits plant foods offer. Get your antioxidants from these sources so you get the synergism these sources offer.

There are certain situations where an antioxidant supplement may offer potential benefits. For example, one study showed beta-carotene, vitamin C, vitamin E in combination with zinc lowered the risk of age-related macular degeneration, a common cause of blindness in older people. A study also showed that alpha-lipoic acid may help people who suffer from diabetic neuropathy, a type of nerve damage. The point is that it’s better not to take an antioxidant supplement unless you have a specific reason to and you’ve talked to your doctor about it. You can get many of the benefits by eating a diet rich in plant-based foods.

Now you know how to best get your antioxidants – from natural food sources rather than supplements. Take advantage of it by enjoying more fruits and vegetables rather than popping a pill.

Scientific American. “Antioxidant Supplements: Too Much of a Good Thing?”

Do You Need More Vitamin E if You Exercise?

Do Antioxidants Interfere with Fitness Gains?

5 Myths About Antioxidants You Should Know About

Can You Get All the Nutrients You Need from a Plant-Based Diet?