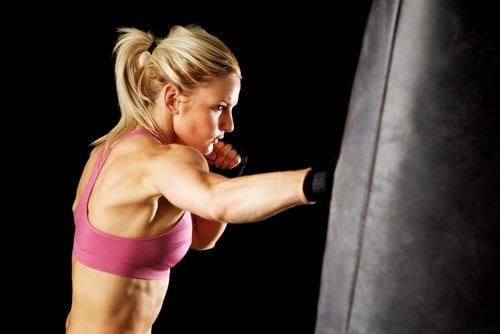 Low iron levels are not uncommon in pre-menopausal women athletes, particularly those who consume a vegetarian diet. Women who exercise intensely or do long periods of endurance exercise have slightly higher iron requirements due to a greater level of iron turnover. Plus, female athletes lose iron through sweating and through menstrual bleeding, meaning you may be at greater risk for iron deficiency if you train hard.

Runners are at especially high risk for iron deficiency, especially if they run long distances. That’s because the impact of their feet striking the ground damages red blood cells. When iron stores become very low, it leads to iron deficiency anemia. Active men and women can also have a “sports anemia” due to an expansion in plasma volume in response to training. Sports anemia is not true anemia since there’s adequate red blood cells and hemoglobin, but the hemoglobin is falsely low because it’s diluted due to the expanded plasma volume.

How common is iron deficiency anemia among women who train hard? Studies show a frequency as low as 2% up to a high of around 15%. What’s more common is iron deficiency without anemia. Low iron stores without anemia affect as many as one in three women who are athletic, especially endurance athletes. If you have low iron levels, can it impact your exercise performance?

Iron is stored in a form called ferritin. So if you have iron deficiency without anemia, you have a low ferritin level but normal hemoglobin. It’s clear that iron deficiency severe enough to cause anemia impacts exercise performance. Iron is needed to make hemoglobin, and hemoglobin is the portion of the red blood cell that carries oxygen to all tissues of the body, including muscle tissue. When hemoglobin levels drop due to iron deficiency anemia, so does exercise endurance. Research shows that even mild drops in hemoglobin reduce endurance and decrease exercise tolerance.

Since iron is required for some of the reactions used to produce energy (ATP) through oxidative processes, at least in animals, low iron stores DO decrease ATP production and reduce exercise endurance. Whether this has the same impact on humans is still unclear.

If your exercise tolerance or endurance isn’t as good as it used to be or you feel less motivated to exercise, ask your doctor to check your hemoglobin and a ferritin level. Some doctors only check a hemoglobin level, so you’ll have to ask them to get a full iron panel that includes ferritin.

Some experts believe all female athletes should have a hemoglobin and ferritin level checked regularly since they’re at higher risk for iron deficiency anemia and low iron stores. Whether or not you’ll need treatment depends on how low your iron stores are. If you train hard it’s best to get your ferritin into the normal range, especially if you don’t eat red meat or foods fortified with iron. Plant-based sources of iron are not as readily absorbed as animal sources.

One word of caution. Don’t self-diagnose or take an iron supplement without knowing whether you need it. Iron is a pro-oxidant and high levels may increase the risk for health problems. Plus, taking iron supplements can upset your mineral balance by blocking absorption of other minerals like zinc and copper.

Keep track of your hemoglobin and iron levels – it could have an effect on your exercise performance and how motivated you feel to work out.

Afternoon Fatigue: 6 Ways Your Diet Could Be Making You Tired