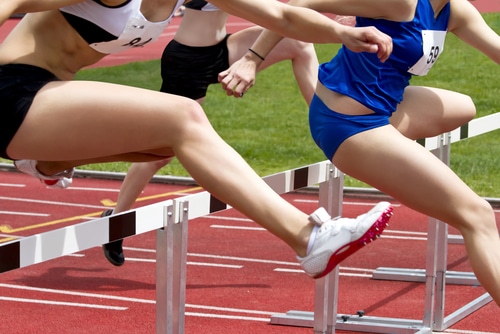 One dietary problem that can affect exercise endurance is a low iron level. Athletes need iron to make hemoglobin, the blood component that carries oxygen to tissues. When there’s not enough iron available, less hemoglobin can be produced and less oxygen is delivered to tissues during exercise. This causes a drop in maximal oxygen consumption (VO2 max) and a reduction in stamina and endurance. Athletes are at higher risk for iron deficiency and iron deficiency anemia and need to monitor their iron levels more closely than sedentary people. Here’s why.

Athletes, especially those who run or do high-impact exercise, have a greater rate of red blood cell turnover. When a runner’s foot strikes the ground, the force causes red blood cells to rupture prematurely. This can also happen to athletes who participate in power sports or sports that involve a lot of jumping and ballistic movements. There’s another factor at play too. Exercise increases oxidative damage, which can shorten the life of red blood cells. Some of the iron released from the damaged red blood cells can be recycled, but not all of it is, so iron levels can fall.

Athletes lose small amounts of iron through sweat and urine. They can also lose it from microscopic bleeding from their digestive tract. This is more common in athletes who use non-steroidal anti-inflammatory medications that damage the lining of the digestive tract. Women are at higher risk for iron deficiency because they lose blood monthly through menstrual bleeding.

Some athletes, particularly females, don’t consume enough calories or don’t eat foods high in iron. Meat is the best source of heme-iron, the form that’s easiest for the body to absorb and use. Many non-meat foods also contain iron, but it’s non-heme iron, which isn’t absorbed as readily. This means that athletes who eat a mostly vegetarian diet need to compensate by eating more iron-rich foods to make up for the reduced absorption. Many don’t do this. Some whole grains, cereals, and vegetables contain compounds called oxalates and phytates that bind to iron and other minerals so less is absorbed.

Iron is more of an issue in athletes, especially female athletes who restrict calories or eat a vegetarian diet. Too much iron can be unhealthy too, so it’s a good idea to check an iron level every six months if you work out to make sure you’re getting the right amount for optimal health and exercise performance.