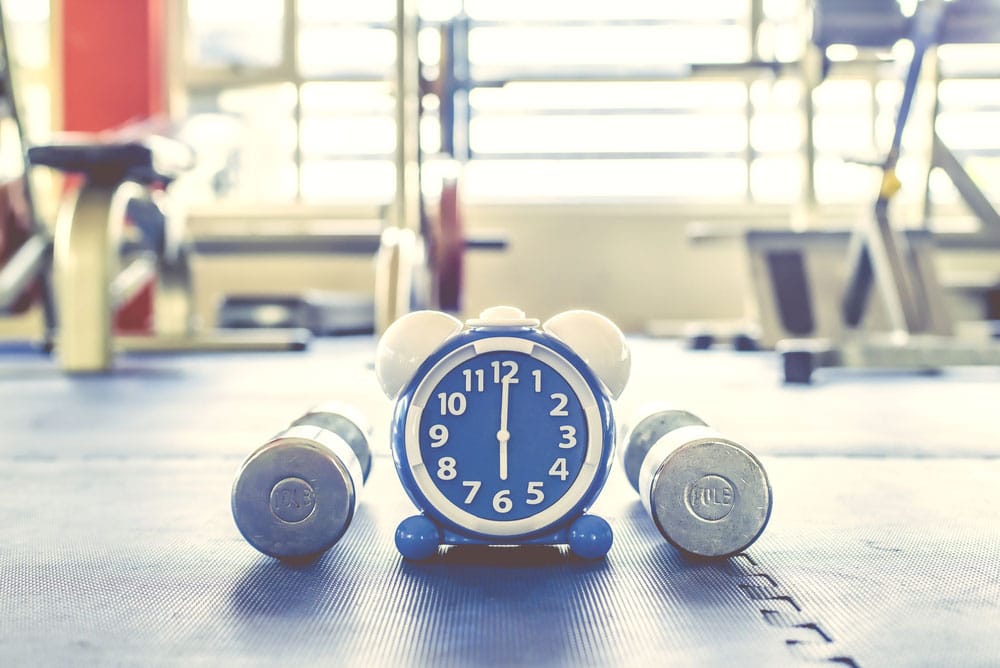 When is the best time to exercise? If you look at it from a convenience standpoint, the ideal time to sweat for you could be morning, afternoon, or evening, depending upon your schedule. Some people like to greet a new day with a workout that gets their blood pumping while others like to grab dumbbells in the evening, after work, so they can relieve the tensions of the day. You might even work out at different times of the day based on your schedule or mood.

There’s no wrong time to work out, unless it’s the middle of the night!  But what if your main goal is to lose body fat? A new study suggests that exercising before breakfast may give you a fat-burning advantage. This idea isn’t new. Years ago, it was popular to do fasted cardio because it boosts fat burning. Now, a new study adds to the evidence that morning workouts have fat loss benefits.

What the Study Shows about Early Morning Exercise and Fat Loss

For the study, researchers at the University of Bath and The University of Birmingham asked 30 obese or overweight men to take part in an exercise experiment. One group of men worked out before breakfast while a second did their workout after breakfast. A third group went about their daily activities, as usual, serving as a control group.

What type of workout did the participants do? The guys in the study cycled on an exercise bike for 60 minutes at a moderate intensity. Afterward, the researchers checked various blood markers to see how they responded to their workouts. The results? The males who exercised before breakfast burned double the fat that the men who worked out after breakfast did. Based on this, if you’re trying to lose weight that extra fat burning could benefit you.

Despite not losing more body fat, the men who worked out before breakfast enjoyed some added health perks that those who worked out after breakfast didn’t. Those who exercised prior to eating experienced less of a rise in insulin than did the after-breakfast group, despite eating a similar morning meal. Their muscles were more responsive to insulin and they didn’t need to release as much to get glucose into cells.

Why does this matter? Research links improvements in insulin sensitivity with better health. The subjects who exercised before breakfast also had higher levels of key proteins that carry glucose from the bloodstream into cells. These changes would be favorable for metabolic health.

Why would exercise before breakfast boost fat burning? When you haven’t eaten, your insulin level is low, as was apparent in this study. When insulin is low, it turns on a key enzyme called hormone-sensitive lipase that forces the release of fat from fat cells. In contrast, if you eat a meal, insulin will rise and muscle cells will use the carbohydrates from that meal as fuel rather than fat. The insulin puts a lock on fat cells and fat loss. That’s not what you want if you’re trying to get leaner!

Exercise Before Breakfast or Not?

So, should you exercise in the morning before breakfast? This study doesn’t necessarily apply to everyone as it only looked at males. It’s possible that the results would have been different with females. Plus, the rate of weight loss wasn’t different between the two groups who exercised. Yet exercising before breakfast was favorable for markers of metabolic health. To add to the evidence favoring exercising early, a study found that when women took a brisk early morning walk, they exercised more throughout the day. Plus, they had less food cravings. Getting that early morning exercise session in may cause changes in brain chemicals that increase the likelihood that you’ll move more the rest of the day. That’s an added benefit!

Downsides of Exercise Before Breakfast

As with most things, there are upsides and downsides. You may burn more fat if you work out before breakfast, but will you exercise as hard? After an overnight fast, your glycogen stores may be low, and this can lead to a lackluster workout. If not eating causes you to reduce the intensity of your workout, you may not get the same benefits as you would if you ate something before your workout. However, if you plan on doing a low to moderate-intensity session, skipping breakfast may work for you as you’re not forcing your body to exercise vigorously in a low-fuel state. Find what works for you!

Exercising before breakfast may be beneficial for your metabolic health, but it could also limit how hard you can exercise. Therefore, base your decision on the intensity of the workout you’ll be doing. If you’re lifting heavy weights or doing a HIIT routine, it might serve you best eating something before you begin. However, if it’s a light day, working out as soon as you get up on an empty stomach may give you a fat loss advantage. Keep in mind, what works for one person isn’t always ideal for another. Some people have a hard time exercising without eating beforehand and if you have a history of low blood sugar or take certain medications, you shouldn’t. At the very least, make sure you’re well-hydrated before launching into an exercise session.

·        University of Bath. “Increase health benefits of exercise by working out before breakfast – new research”

Tips for Making the Transition to Morning Exercise

5 Powerful Benefits to Working Out in the Morning

6 Ways to Keep Working Out Fun

Are Mental Blocks Keeping You from Getting Your Fittest?