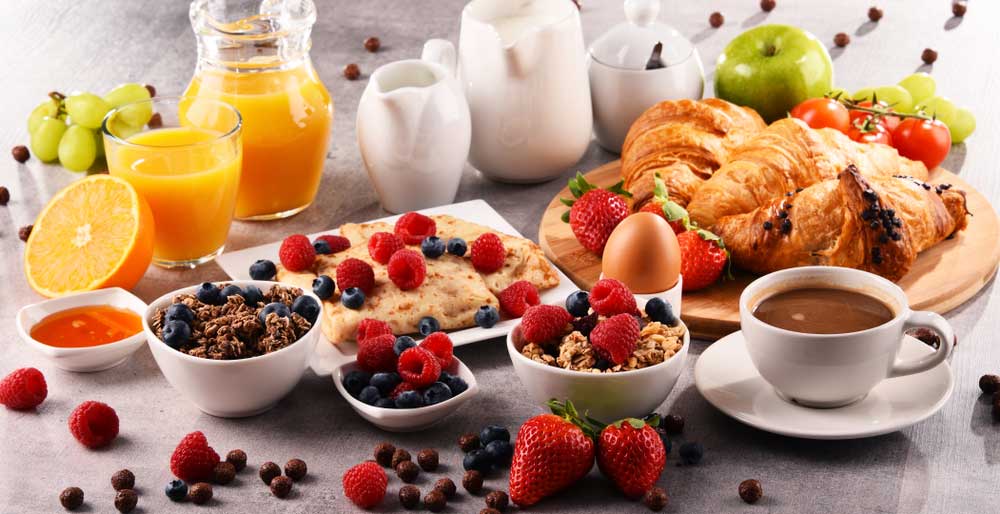 You’ve probably heard people say that breakfast is the most important meal of the day. Sound familiar? You may have also heard that eating breakfast reduces hunger or boosts your metabolism, so you can lose more weight.  But, does science really support the idea that a morning meal is a must and that skipping it is paramount to adding inches to your waistline? Let’s look at some of the recent evidence for and against this claim.

First, a lot of variables are involved in determining the impact eating breakfast has on body weight. There’s the issue of when you eat breakfast and what you eat in particular. For example, eating a breakfast of waffles with extra syrup, a big slab of bacon, and a few biscuits is a lot different than eating an egg or two and some fruit. So, it’s hard to find studies that control for all these factors well. However, a number of studies have tried to ferret out the importance of eating breakfast for weight control with sometimes conflicting results.

So, how might eating or not eating breakfast impact weight gain or weight loss? One argument that scientists make for eating breakfast when you’re trying to lose weight is that it helps curb the desire to eat. The argument is that chowing down on a morning meal reduces hunger so that you eat less later in the day. Although this makes logical sense, it doesn’t necessarily play out in practice.

How do we know this? In a study published in the Nutrition Journal in 2011, researchers at the Else-Kroner-Fresenius Center of Nutritional Medicine asked more than 280 obese and 100 normal weight people to keep a food journal for 10 to 14 days.  Some of the participants ate a substantial breakfast, others ate a small one while others skipped entirely.

Although there is previous research suggesting that eating breakfast DOES reduce how much you eat later in the day, these studies have flaws. However, this might not be the final word on the matter as there are so many variations in how and when people eat breakfast. At the very least, there’s no substantial evidence that eating a big breakfast will help you consume less over the course of a day.

Does Eating Breakfast Boost Your Metabolism?

Other proponents of eating a big breakfast say that it jumpstarts your metabolism. Theoretically, this should give you an advantage in terms of weight loss.  But, does this hold up to scientific scrutiny? In a study published in the Journal of Physiology, researchers divided 49 young and middle-aged people into two groups. Before the study, they biopsied their fat cells to look at the activity of fat burning genes and genes that influence insulin sensitivity. They also measured the participants’ resting metabolic rate, body composition, and various markers of metabolic health.

During the study, one group was asked to eat at least 350 calories within 2 hours of awakening. They were also instructed to eat a minimum of 350 more calories before 11:00 A.M. The composition of their breakfast varied. The other group ate nothing until mid-day. Both groups repeated this pattern for 6 days. At the end of the study, they repeated the original tests and measurements to see how they had changed.

Although the lean people ate more overall calories when they ate breakfast, they also got an extra bonus – their energy expenditure related to physical activity increased. In other words, the breakfast eaters moved around more, fidgeted more, and burned more calories after their morning meal. It makes sense as people who eat breakfast likely have more energy in the morning than breakfast skipper. In addition, those who ate a morning meal also experienced greater insulin sensitivity and less activation of genes involved in insulin resistance.

Breakfast and Your Metabolic Health

So, eating breakfast may be more favorable for metabolic health and for the future risk of developing type 2 diabetes. The subjects who were obese, as expected, showed greater insulin resistance than the lean participants, but eating breakfast seemed to boost genes involved in fat burning.

Based on the research, there are some arguments for eating breakfast. If you eat in the morning, you activate fat-burning genes and may have greater insulin sensitivity. Plus, breakfast can increase your total energy expenditure slightly by causing you to move more. If you eat a big breakfast, the key is to watch how much you eat later in the day, especially lunch, as the first study suggests that we don’t compensate for additional breakfast calories by eating less.

It’s also important to consider how active you’ll be. If you have a high-intensity workout scheduled for the morning, you shouldn’t skip lunch as you will tap into stored glycogen as an energy source. It also depends on how you feel when you skip breakfast. If you feel tired and lack motivation, skimping on breakfast isn’t for you.

There really isn’t a one size fits all recommendation for whether to eat breakfast and how much to eat if you’re trying to lose weight. If you have a higher energy level after eating breakfast, it works in your favor as you’ll move more. But, based on research, eating breakfast won’t necessarily curb your food intake later in the day. This means you’ll still have to make the right food choices and eat mindfully, regardless of whether you eat a big meal in the morning.

Regardless, make sure you’re making healthy choices in the morning and the remainder of the day as well. The composition of your diet is what matters most. A good choice might be an omelet loaded with vegetables – and it’s a good chance to get a jump start on your five or more fruits and veggies per day.