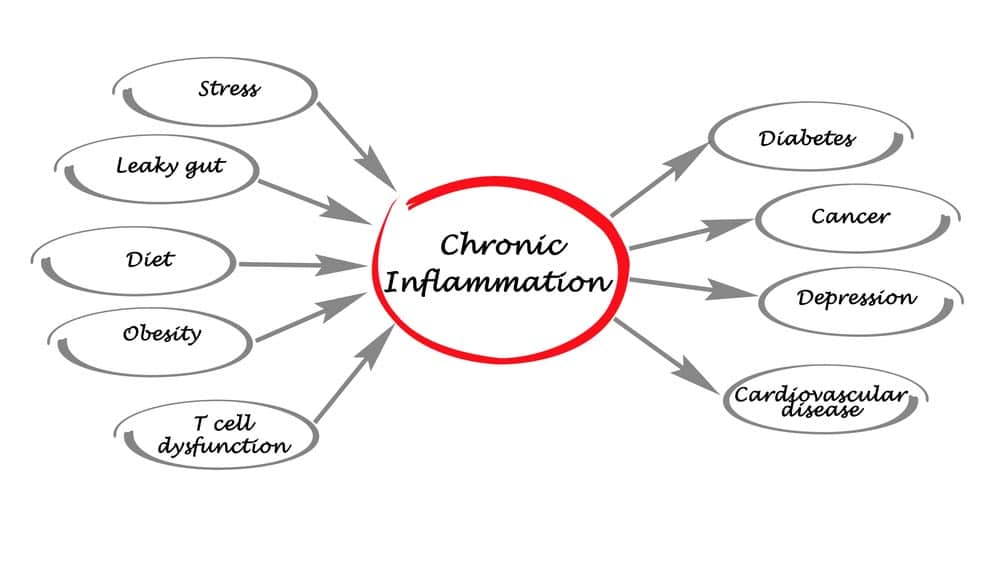 Inflammation can be a good thing when it’s short-term. When your body encounters a foreign invader, like a bacteria, parasite, or virus, it launches an immune response that leads to transient inflammation. This short burst helps to fight off the threat. Hopefully, the inflammatory response eradicates the intruder and the inflammation subsides. Mission accomplished!

We want an acute inflammatory response when a bad bacteria or virus enters our body. However, some people suffer from low-grade inflammation all the time and aren’t even aware of it. This type of inflammation isn’t directed toward any pathogen in particular, but it can still damage normal tissues over time. In fact, research suggests that this less visible type of inflammatory response may play a role in chronic diseases such as cardiovascular disease, type 2 diabetes, autoimmune diseases, and cancer.

A condition in which you see increased inflammation is obesity, particularly abdominal obesity. Abdominal obesity is often a marker of large quantities of visceral fat, a particularly risky form of fat when it comes to your health. Even people of normal weight can have too much visceral fat. You’ve heard the term “skinny-fat,” right? A general rule of thumb is that your waist size should be no larger than half your height. For example, a person who is 5 feet 6 inches, or 66 inches, should have a waist size no larger than 33 inches.

In addition, studies suggest that the inflammatory cytokines fat cells produce may support the growth of malignant cells. In fact, obesity is linked with an increased risk of at least seven forms of cancer, including cancers of the colon, rectum, uterus, kidney, pancreas, breast (post-menopausally) and esophagus. It may also boost the risk of these cancers: ovarian cancer, cancer of the cervix, liver cancer, gallbladder cancer, multiple myeloma, and non-Hodgkin’s lymphoma, according to the American Cancer Society.

But, here’s the good news. Exercise seems to suppress inflammation in people who are obese, and now scientists think they know why.

According to a number of studies, exercise, particularly aerobic exercise, reduces inflammation. In fact, the fact that exercise helps reign in inflammation may explain some of its health benefits. But, how does exercise do this?

The Inflammation-Fighting Power of Working Out

In a recent study, researchers asked young adults, some of whom were lean and some obese, to take part in a six-week aerobic exercise program. Over the course of the six-week study, the participants cycled or ran on a treadmill three times per week for about an hour. Before and after each exercise session, the researchers took blood samples from the subjects. When they looked at the blood samples, they made an interesting observation. They saw a decrease in the number of stem cells in the blood that promote inflammation after the participants completed their workouts.

By now, you might be confused. We said that fat cells, particularly visceral fat cells, churn out inflammatory chemicals. But, it sounds that blood cells do too. Yes, certain blood cells produce inflammation and these inflammation-producing cells, like all blood cells, form from precursor cells called stem cells.

In the study discussed, the participants cycled or walked on a treadmill for an hour, but research shows you don’t need to work out long to enjoy anti-inflammatory benefits. Other studies show that only 20 minutes of walking on a treadmill is enough to reign in the inflammatory response. Specifically, 20 minutes of treadmill walking diminished the production of an immune cell cytokine called TNF that triggers inflammation. Yes, exercise has anti-inflammatory benefits in addition to its other health benefits.

Beyond Exercise for Dialing Back Inflammation

Exercise is one health habit in your arsenal that can help you get a grip on low-grade inflammation – but it’s not the only one. Diet and other lifestyle factors matter as well. Cut back on refined carbohydrates and sugar as these foods cause a rapid rise in blood sugar. Instead, dine on more colorful fruits and vegetables that are naturally rich in anti-inflammatory chemicals. Flavor them with anti-inflammatory spices, like turmeric, rosemary, and ginger. Add more omega-3’s to your diet from sources like fatty fish. Research suggests that these fats help block the production of inflammatory chemicals called prostaglandins that fuel inflammation.

We also know that our gut microbiome is a factor in inflammation. A healthy, diverse population of gut bacteria is linked with a healthier immune system, one that’s balanced and not prone toward overactivity and tissue damage. Adding more fermented foods to your diet helps foster a healthy gut microbiome. You don’t need a lot! A few spoonfuls of fermented vegetables daily will go far toward keeping your gut healthy.

Also, avoid consuming foods you’re allergic to and gluten, if you’re gluten sensitive or have celiac disease. Foods that over-activate your immune system fuel inflammation. Also, make sure your vitamin D level is within the normal range, as vitamin D plays a role in immune health and inflammation.

Exercise is another lifestyle habit that may help curb inflammation. Combine it with a healthy diet, enough sleep, and stress management and you’ll reduce your risk of developing a number of conditions linked to inflammation.

The Anti-Inflammatory Effects of Exercise

Why 20 Minutes of Exercise is a Good Anti-Inflammatory