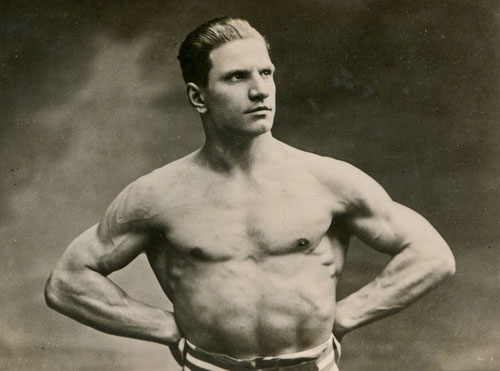 Rates of physical activity have shown a downward decline over the past fifty years. A 2005 study identified a number of possible reasons people are more inactive these days. There’s readily available public transportation, reducing the need to walk or bike to work, and declining activity at home. Heck, with technology and remote controls, you hardly have to get up out of your chair. Plus, many folks work desk jobs where they sit 90% of the day. Unless they do a regular workout, most people are hardly moving these days. Sedentary has become a way of life. Despite the drop in physical activity and fitness over the past 50 years, this may only be the tip of the iceberg. Our ancestors seem to have been far more physically fit than the average person is today.

How Much Have Fitness Levels Declined?

Researchers at Cambridge University looked at the skeletons of people from early farming societies, thousands of years ago, and compared them to people of today. Not surprisingly, the bones in their lower extremities showed people from this period in history were more physically active than modern-day men and women are. In fact, based on this research, they believe early farmers 7,000 years ago had a fitness level comparable to cross-country runners in modern times and their lower extremity strength was comparable to many modern-day athletes. This isn’t really surprising. For people who lived even earlier, hunter-gatherer societies, exercise wasn’t optional. It was woven into the fabric of their lives and necessary for survival. Hunting for food and running from predator’s burns a lot of calories! In fact, research shows the typical individual living in a hunter-gatherer society burned between 800 and 1,200 calories a day in physical activity. This high level of activity also built strong muscles and bones. The average person today only burns a relatively small amount of calories in physical activities or exercise.

It wasn’t just the men in hunter-gatherer societies that were in stellar physical shape. Women were on the move too forging for plant-based foods. This involved lots of bending, stooping and physical activity like digging and carrying what they gathered. Plus, they often carried children along with them. Women in these societies constructed shelters too – hardly light work! This is in sharp contrast to the office jobs of today. Hunter-gatherer life was anything but sedentary. A far cry different from modern-day lifestyles!

Why is this significant? Some experts argue the higher level of fitness people had in these earlier times is what our genes are adapted to. The normal human state is to be active. Because humans are no longer as active as their ancestors, we suffer a host of health problems like type 2 diabetes, heart disease, and osteoporosis – not to mention psychological problems like depression. Of course, there were no processed foods and industrial pollution to contend with either. These days our lives are complex but this doesn’t necessarily translate into movement. As experts point out, our bodies were made to move. Not are only are humans equipped to handle physical activity and work, we thrive on it.

How to Thrive in an Increasingly Inactive Society

Research already shows sitting is lethal. People who sit for hours at a time are at higher risk for health problems like type 2 diabetes, heart disease and have higher overall mortality. According to one meta-analysis, too little activity accounts for 9% of premature mortality worldwide.

Why is sitting so bad? When you sit most of the day, you have higher glucose and insulin levels after meals. That has a negative impact on metabolic health. You don’t have to run a marathon to reverse the effects of “sittingitis.” Even a few minutes of low-intensity exercise, a walk around the office helps. You weren’t designed to sit for long periods of time so you need to break up periods of sitting with periods of movement, even brief ones.

People living in hunter-gatherer and early farming societies didn’t go to a gym to get their exercise. Instead, they got a diverse workout simply doing their daily activities. The movements they did built strength and improved flexibility and endurance. You can do the same by varying your workouts. Circuit workouts, high-intensity interval workouts, power workouts, and strength training all help you build a strong, defined body that’s functionally fit. When you’re strong and functionally fit it carries over into every aspect of your life.

Yes, activity levels have greatly declined since early times but our bodies are still built to move and be challenged. Don’t be afraid to take on new workout challenges and push a little harder. Your body is capable of handling hard work whether it’s running from predators and building shelter or swinging kettlebells and doing jump squats. It’s built into your genes. Just as importantly, break up periods of sitting during the day with some activity every 30 minutes or so even if it’s just a short break to get up and stretch. Do it for your health.

Science Daily. “From athletes to couch potatoes: Humans through 6,000 years of farming”

PLOS One. “Daily Sitting Time and All-Cause Mortality: A Meta-Analysis”

The Physician and Sportsmedicine. “Organic Fitness: Physical Activity Consistent with Our Hunter-Gatherer Heritage”

Does Being Physically Fit Reduce the Risk of a Cold?

One thought on “Decline in Physical Fitness: Why Humans Aren’t as Fit as They Used to Be”