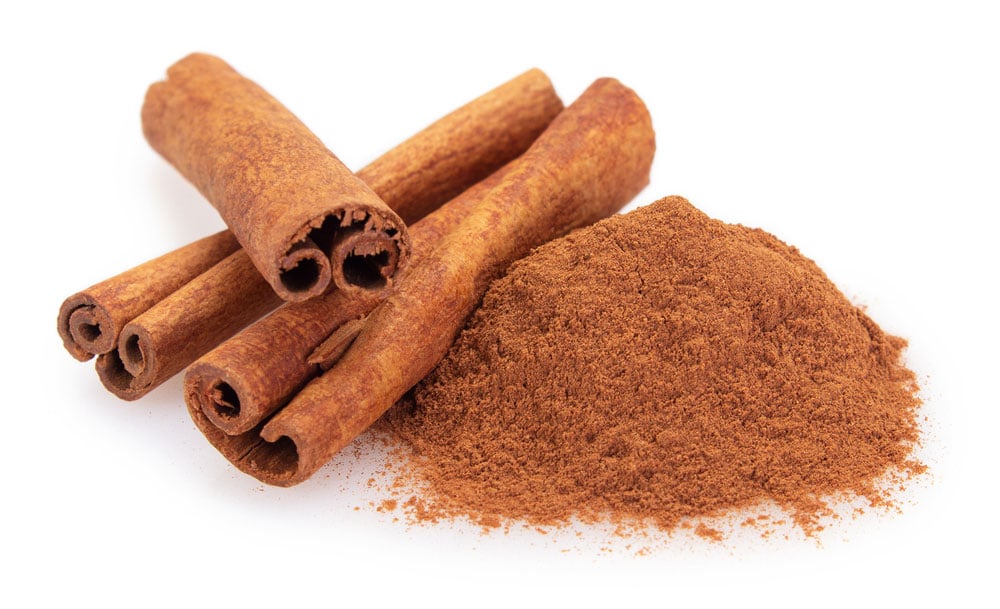 Ah! The lovely aroma of cinnamon. Unfortunately, cinnamon is often synonymous with cinnamon buns and desserts rather than healthier fare, but there are better-for-you ways to enjoy this luscious spice. This woody spice, harvested from the inner bark of the evergreen tree, is also a tasty addition to coffee and porridge.

Why should you enjoy this spice as much for its health benefits as its flavor? Cinnamon is rich in antioxidant polyphenols and tops the list of antioxidant-rich foods and spices. Being an antioxidant, cinnamon has anti-inflammatory activity, but it’s kind to your waistline too. In fact, it could help you shed belly fat.

How Cinnamon Could Help with Belly Fat Control

Extra inches of body fat that build up around the waist is a marker for visceral fat—deep belly fat that carries a higher risk of health problems, including cardiovascular disease, type 2 diabetes, and some types of cancer. Visceral fat cells are little hormone factories that release chemicals that fuel inflammation.

One way cinnamon improves health is by countering this inflammation. It’s like other anti-inflammatory spices and herbs, including turmeric, garlic, and ginger that reduce oxidative stress and keep inflammation in check. That’s important since inflammation plays a role in a variety of health problems, including cardiovascular disease. In fact, almost every disease has an inflammatory component.

Another way cinnamon could help with belly fat is by increasing insulin sensitivity, how cells respond to insulin. Poor insulin sensitivity, also known as insulin resistance, is a hallmark of pre-diabetes and type 2 diabetes. High insulin levels, because of low insulin sensitivity, increases fat storage around the waist and deep inside the pelvic cavity, the visceral fat that we need less of for optimal health.

How Can Cinnamon Help?

A study published in the American Journal of Clinical Nutrition found that consuming around a half teaspoon of cinnamon with each meal lowered insulin release after a meal. You need insulin to get glucose into cells, but the downside is it also makes it easier for your body to store fat, including belly fat. The good news? A pinch of cinnamon may make it a little harder to turn what you eat into belly fat!  As a bonus, the subjects who consumed cinnamon felt fuller after a meal – but why?  Research shows that a half-teaspoon of cinnamon boosts the release of a hormone called GLP-1 that increases satiety. Plus, the woodsy, pungent flavor of cinnamon naturally suppresses the desire to eat.

If cinnamon lowers insulin and increases satiety, it may also help with weight loss and loss of belly fat too. Also, the changes in insulin sensitivity brought about by cinnamon are favorable for metabolic health. Even health care providers that treat diabetics recognize the benefits cinnamon offers for metabolic health in people with diabetes and pre-diabetes. Several small studies show that cinnamon and cinnamon extract lower blood glucose after a meal and reduce blood sugar spikes.

The results? When the researchers measured visceral fat in the mice at the end of 4 weeks, the mice who got cinnamaldehyde lost belly fat while the other group didn’t. Unfortunately, there are no studies in humans to confirm these findings yet. However, when you look at the effects of cinnamon on insulin sensitivity and satiety, it’s reasonable to say that consuming a half-teaspoon with a meal could be beneficial for belly fat, along with a healthy diet and exercise plan.

If you have prediabetes, cinnamon has other health benefits. A recent study showed subjects who took a 500 mg cinnamon capsule three times a day for 12 weeks had lower and more stable blood sugar levels than those who took a placebo.

What Type of Cinnamon is Best?

It’s hard to draw firm conclusions without human studies, but based on the way cinnamon affects insulin sensitivity and suppresses appetite, it could help with belly fat control too. It’s encouraging, but nothing can replace a healthy diet and regular physical activity for keeping belly fat in check. On the plus side, it’s easy to add a bit of cinnamon to breakfast porridge or coffee and it may offer some added perks!