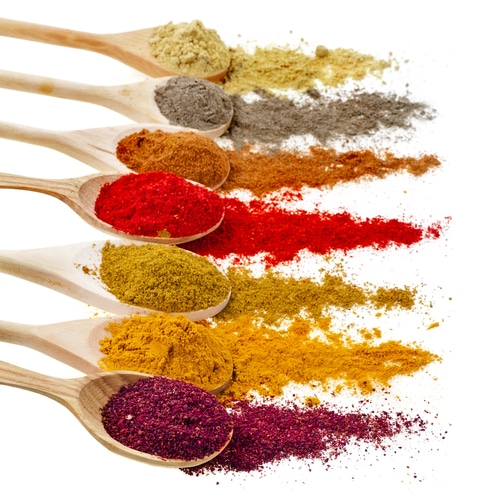 Food would taste pretty bland without a little spice to kick up the flavor but spices do more than enhance the taste of your favorite foods. They also have health benefits, especially if you work out and are trying to control your weight. In fact, based on weight, some spices have more antioxidant power than fruits and veggies. Why not use this to your advantage? Here are some ways adding more spices to your diet works in your favor if you’re trying to control your weight.

Spices Reduce the Insulin Response to a Meal

Insulin resistance is a common problem that makes it more difficult to lose weight. When you’re insulin resistant and eat a meal, your pancreas has to pump out more insulin to get glucose into cells because insulin receptors on cells have become “numb” to its effects. The extra insulin you produce hangs around in your bloodstream after a meal, making it easier for your body to store fat.

Can a common spice help? Some research shows that as little as one teaspoon of cinnamon a day decreases insulin resistance. This will give you a more favorable blood sugar and insulin response to a meal, creating conditions that are less favorable for fat storage. How can you get the benefits? Add a pinch of cinnamon to your oatmeal, to coffee, and to smoothies to get the insulin-sensitizing effects of cinnamon.

Choose Ceylon cinnamon over Cassia cinnamon, the kind you find at the supermarket. Cassia cinnamon contains an ingredient that can be toxic to your liver if you use a lot of it. Ceylon cinnamon contains only minute levels of this compound called coumarin. There’s another upside to eating cinnamon. It may lower your LDL-cholesterol level without affecting HDL, the form of cholesterol linked with a lower risk for heart disease.

Give your food a little kick with cayenne pepper. This sizzling spice boosts your metabolism short-term, but research shows it may enhance weight loss in another way. Based on animal studies, researchers in South Korea believe the active ingredient in cayenne pepper and chili peppers called capsaicin alters levels of proteins that regulate fat storage and breakdown, leading to less fat storage. Plus, hot and spicy foods are more satiating so you’ll eat less of it. One study showed that men who added hot sauce to their food ate 200 fewer calories later on. As a bonus, capsaicin also has anti-inflammatory benefits.

When you do a hard workout, it can be hard to walk around or work out the next day due to muscle soreness. When you damage muscle fibers, it leads to painful inflammation and soreness 24 to 48 hours later. One study showed that turmeric, a spice found in curry, helps to ease exercise-induced inflammation. How so? It contains curcumin, a compound that blocks enzymes involved in producing pain and inflammation.

Unfortunately, turmeric isn’t well-absorbed, but you can increase its rate of absorption by combining it with black pepper. As an added benefit, the curcumin in turmeric may reduce inflammation from other conditions such as rheumatoid arthritis. Plus, it may block the growth of some cancers. One way to enjoy the benefits of curcumin is to eat more curry. You can also add turmeric and black pepper to soups, stews, and chili or sprinkle it on veggies.

Spices add a new flavor dimension to vegetables so you can enjoy them without lots of butter and high-calorie condiments. Basil and oregano enhance the taste of a side of broccoli, and you can bring out the flavor of almost any vegetable with garlic and a touch of olive oil. By adding more flavor to your vegetables, you’ll eat more of them and fewer sides like mashed potatoes and French fries that’ll add inches to your waistline.

Spices Reduce the Amount of Salt in Your Diet

If you’re trying to control your weight, you don’t want to retain water from eating too much salt. When you add spices to your food, you get flavor without added sodium. They’re a better option for your heart and blood vessels too. Put away the salt shaker and sprinkle on the spices instead. Most common spices are a good source of antioxidants, so you can’t go wrong adding a little spice to your plate.

Enjoy experimenting with spices. It’ll make everything from the main course to veggies taste better and help control your weight too.

3 Spices That Help With Weight Loss