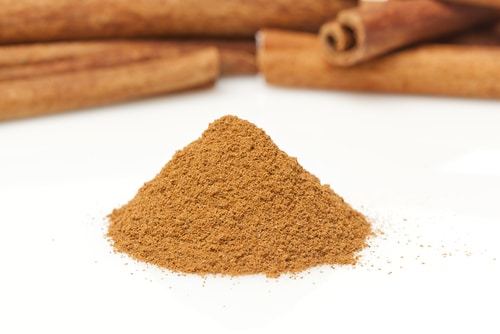 Few spices have been in use for as long as cinnamon has. Its healing virtues, however, have only recently begun to be discovered by modern science. Derived from the dried bark of a small tree that grows in Egypt, Vietnam, Indonesia, Brazil, India, and Sri Lanka, cinnamon has been a fixture in Chinese medicine and Ayurveda. Nowadays it plays an increasingly important role in the practice of alternative medicine in the west.

If you use cinnamon for nutritional or medicinal purposes make sure that what you’re purchasing is true cinnamon (which is admittedly more expensive) and not cassia, which is sometimes sold in health food stores as a substitute. Cassia looks and tastes like cinnamon but does not provide the same health benefits. Some brands of the genuine spice that have garnered positive reviews for their delicious taste, sweet aroma and great texture include Indus Organic Ceylon Cinnamon (available, as are the other brands, in powder form or as rolled sticks – also known as quills), Tsp Spices Ground Organic True Cinnamon from Ceylon, Frontier Herb Organic Ceylon, and Whole Spice Ceylon Cinnamon Powder.

Cinnamon has been found to exert a regulatory effect upon blood sugar levels. For this reason, it has been employed in Ayurvedic practice to treat diabetes (as well as to fight indigestion and colds). It has been used in Chinese medicine to increase energy and circulation and to combat the effects of common colds, nausea, and diarrhea. Cinnamon acts as a natural preservative when added to food. It inhibits the growth of bacteria, thereby slowing spoilage. It also acts as an antibiotic when taken internally. The scent of cinnamon has even demonstrated positive effects upon the human brain, enhancing cognitive function and stimulating memory.

Adding a moderate amount (one-half teaspoon or slightly less) of cinnamon to your daily diet can lower LDL cholesterol. A comparable amount, mixed with a teaspoon of honey, has been revealed (according to a study at Copenhagen University) to provide pain relief for arthritis sufferers. Another research study (this one conducted at Kansas State University) found that cinnamon combated E. coli in juices that were unpasteurized. It has been proven to stop yeast infections that were resistant to other medications.

Aside from its various tonic properties, cinnamon is a good source of nutrients like fiber, calcium, iron, and manganese. There are some possible drawbacks to be aware of, however. Cinnamon has anti-clotting properties, which may or may not be beneficial to a person depending upon the situation. Avoid ingesting it when you face possible heavy bleeding (such as before an operation). Pregnant women should avoid using cinnamon in excess, and abstain from taking it as a daily supplement.

One thought on “Surprising Health Benefits of Cinnamon”