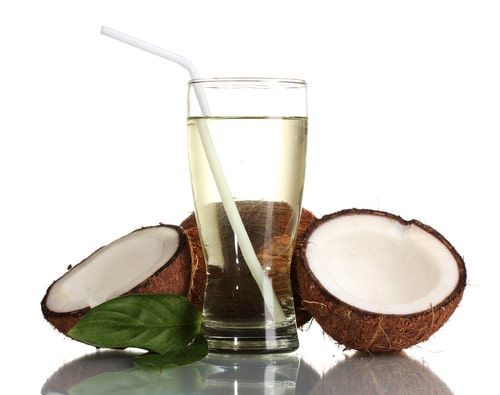 When you exercise, it’s important to stay hydrated. Even mild dehydration can cause fatigue and reduce exercise performance. If you’ll be working out for less than an hour, water is an acceptable re-hydration beverage, but for longer workouts, a sports drink that contains electrolytes like sodium and potassium is best. Fortunately, these days you have lots of options when it comes to sports drinks, and there’s even a natural one that’s growing in popularity. A new study shows that simple coconut water may is as good as highly advertised sports drinks for hydration and replacing electrolytes lost through sweat.

According to a study published in the Journal of the International Society of Sports Nutrition, pure coconut water is as effective for rehydration and maintaining exercise performance as commercial sports drinks. They tested it in a group of trained athletes and compared it to sports drink, coconut water from concentrate and bottled water. Coconut water proved to be as effective as the other alternatives. No wonder more supermarkets are selling containers of coconut water alongside well-known sports drinks. This natural liquid derived from the coconut seed is a viable alternative for staying hydrated during exercise.

Why is Coconut Water a Good Sports Drink?

Coconut water is an isotonic fluid, which means it’s similar to body fluids from an electrolyte standpoint. It’s even used as an intravenous fluid for rehydration in some developing countries. Its isotonic nature makes it ideal for replacing electrolytes and fluid lost through sweating. In fact, coconut water has many times more potassium than the average sports drink, and it’s a good source of calcium and magnesium. These minerals are important for nerve and muscle function, for maintaining normal blood pressure and for bone health. Coconut water has more potassium than even a banana. No wonder the Hawaiians call it “dew from the heavens.”

The other benefit of drinking coconut water in place of sports drink is it’s a natural source of electrolytes unlike most sports drinks, which are simply water with artificial colors and flavors to which electrolytes have been added.

The Importance of Replacing Sodium

Replacing sodium lost through sweating is particularly important since sodium holds fluid in the blood vessels and stimulates thirst while reducing urine output. This helps to maintain hydration. One drawback to drinking coconut water is it contains less sodium than a typical sports drink. That’s a good thing if you’re sipping it when you’re sitting around, but if you’re drinking it while you’re sweating buckets during a long run, you need the added sodium. If you use coconut water as a sports drink, it’s a good idea to add a pinch of salt for additional sodium, especially if you’ll be working out in a hot or humid environment.

Now you have another alternative for staying hydrated during exercise. Sipping coconut water during a workout is a natural alternative to drinking artificially flavored sports drinks, but it may not have enough sodium if you’ll be doing a long workout in a hot environment. You can easily solve that problem by adding a pinch of salt to coconut water before drinking it. Coconut water is also lower in calories than your typical sports drink, which is an advantage if you’re trying to lose weight.