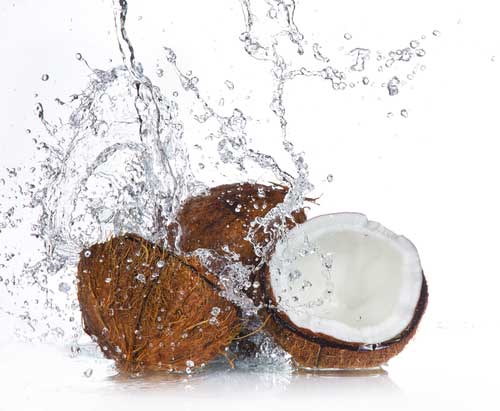 Beverage trends come and go. Sodas are declining in popularity (a good thing), and people are looking for a replacement beverage. One of the hottest trends is coconut water, a beverage that comes from the coconut fruit. Don’t confuse coconut water with coconut milk. Coconut milk comes from the meat of the coconut and is high in fat and calories. Natural coconut water is the clear liquid in the center of a coconut. It’s low in calories, about 40-50 calories per serving, and contains no fat.

Coconut water is popular as a sports rehydration beverage but some sources take it a step further and call it a superfood, claiming coconut water lowers blood pressure and reduces the risk of heart disease, kidney stones, cancer, and other health problems. Are the claims about coconut water overhyped? What’s really in this popular beverage?

The coconut water that comes from a fresh coconut is different from the processed liquid sold in bottles and cardboard containers as coconut water. Once the coconut is opened and the liquid removed it’s heated to a high temperature to sterilize it. This heating process destroys some of the natural compounds that potentially offer health benefits.

Why is this important? Many of the health claims about coconut water pertain to natural coconut water that hasn’t been exposed to high heat or otherwise altered. Even then, there’s not a lot of evidence that drinking coconut water prevents or cures any diseases. Coconut water contains plant hormones called cytokinins that could have health benefits but there’s a lack of research to confirm this. Coconut water is a good source of potassium, which may be helpful for blood pressure control but there’s not a lot of evidence that it prevents cancer, heart disease or other health problems.

Even though coconut water won’t necessarily lower your risk for health problems and probably doesn’t qualify as a superfood, it’s a good sports beverage. Although water is sufficient when you’re working out for less than an hour in a cool environment, you may need a beverage with added electrolytes if it’s hot or you’re working out longer. You lose sodium, potassium and small amounts of magnesium when you sweat heavily.

Coconut water is a good source of potassium but has less sodium than the average sports drink. You lose more sodium than potassium when you sweat. Unless you’re sweating profusely or working out for a long period of time, coconut water should be adequate for fluid and electrolyte replacement. Coconut water is low in natural sugar so it’s not a good source of glucose to fuel your workout and won’t replenish glycogen after your workout as well as a sports beverage. Some commercial coconut waters do come in flavors with added sugar.

Coconut water probably isn’t the superfood some sources make it out to be. On the other hand, it is a decent beverage for hydrating during a workout. You probably don’t need an electrolyte-rich beverage like coconut water or a sports drink as long as your workout is less than an hour and you’re not exercising in a hot environment. Plain old water works fine in that case and doesn’t cost a thing. Combine water with a banana or orange prior to a workout out to get a dose of potassium and carbs. But, if you enjoy the taste of coconut water and drink more as a result, it serves a useful purpose.

Keep in mind the “coconut water” you buy at many supermarkets is from concentrate. Some of the heat-sensitive chemicals found in natural coconut water have been destroyed by heat processing. In some areas, you can find raw coconut water sterilized using pressure instead of high heat. If you believe in the healing properties of natural coconut water, this is your best bet. Coconut water bottled in countries that have coconuts like Thailand, not the United States, is likely to be less processed. Your best bet might be to harvest your own natural coconut water from a green coconut. If you’re feeling a little adventurous, give it a try!