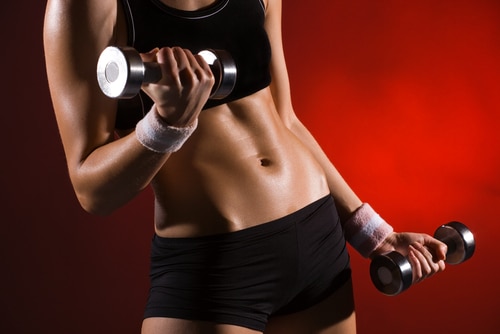 Lifting Light Weights: Can It Give You More Definition?

Researchers at McMaster University recently put light weight lifting to the test. They recruited a group of healthy young men and tested different combinations of weights and reps to see what effect each would have on muscle growth. Some of the men did a single set at 80% of their one-rep maximum, while another group did three sets at 80%. A third group did three sets at 30% of their one-rep max. The men were asked to do as many reps as they could with each set.

After training for ten weeks using this protocol, researchers measured their muscle growth using MRI. Surprisingly, all three groups had similar amounts of growth, even ones who lifted only 30% of their maximum. Using such a low weight would normally be appropriate for an endurance workout, but the participants were still able to build lean body mass at such a low weight. There was a slight difference in strength development between the three groups. The group that did three sets at their 80% max was a little stronger at the end of the ten-week training period.

It’s a bit surprising that all three groups had similar muscle development, at least in this study. The key may be that all three groups lifted until they were unable to do another rep with good form. Had they not lifted to near failure, the degree of muscle growth in the group lifting lighter may not have been as pronounced.

Before assuming this was just a bad study, this isn’t the first one to show that lifting lighter builds muscle. A study published in the journal PLoS One came to a similar conclusion. In this study, researchers used tracers and muscle biopsy to measure protein synthesis after participants lifted using various protocols. They discovered lifting at 30% of one-rep max until failure boosted muscle protein synthesis as effectively as lifting at 90% of one-rep max to failure.

Should This Change How You Train?

If you’re trying to build lean body mass, you can get results lifting heavy, but you may also see growth if you lift lighter – but only if you lift to failure. Diet plays a role too. Lifting won’t get you very far if you’re restricting calories too much and not getting enough protein. What you eat and how much is just as important as how hard you lift.

Don’t be afraid to use lighter weights once in a while. These studies also show it’s okay to add a little variety to your strength training routine. You won’t lose your hard-earned lean body mass if you lift lighter for a few weeks, as long as you push yourself. In fact, it may beneficial to challenge your muscles in a new way, especially if you’ve reached a training plateau.

The results of these studies are also good news for people who are older or have medical issues that make it difficult for them to lift heavy weights. They can still increase their strength and lean body mass with lighter weights as long as they challenge themselves. Muscle mass declines with age, and it’s possible to maintain it with a regular strength training program.

Does Light Weight Lifting Have Benefits?

3 thoughts on “Can You Build Muscle Lifting Lighter Weights?”