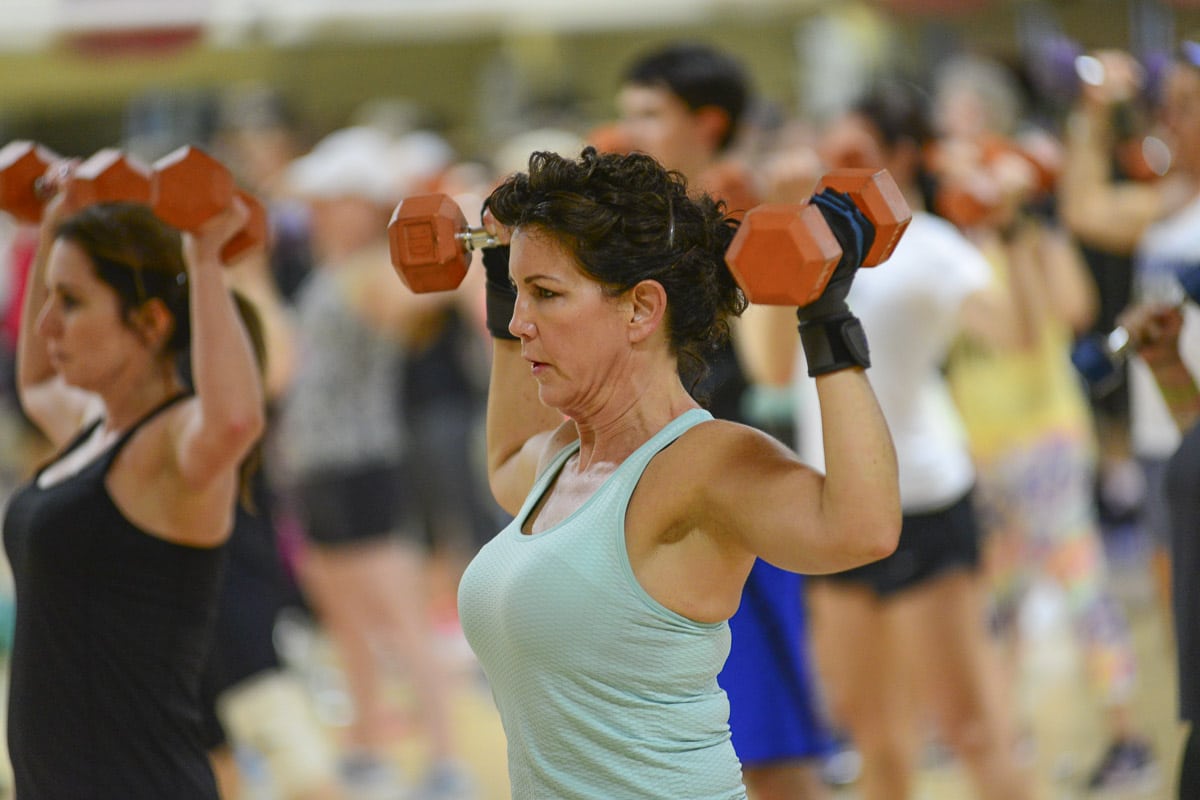 One of the training variables you can manipulate when you resistance train is the amount of weight that you use and the number of reps you do. If you choose a heavier weight, you won’t be able to do as many reps as your muscles will fatigue faster. Ask most fitness trainers how much weight you need to lift to build strength and they’ll tell you heavier is better for strength development. Yet, you might wonder whether you can build strength using lighter weights as well. Let’s look at what science says about this issue.

Can You Build Strength with Lighter Weights?

If you grab a pair of light weights and do a few reps, you won’t get stronger – but what if you use light weights and do enough reps to completely fatigue the muscles? You might think this places enough stress on the muscle to cause it to become stronger. However, building strength is different from building muscle size. Muscle hypertrophy is mostly about the mechanical stress you place on the muscle. More mechanical stress leads to more muscle fiber damage so that the fibers have to repair and grow. In contrast, building strength has a neural, or nervous system, component as well.

How do we know this? In a recent study carried out at the University of Nebraska-Lincoln, researchers asked young men to complete a 6-week training session on the leg extension machine. The guys worked their lower extremities on the machine to failure 3 times per week. The workout structure was the same but the difference was in how much weight they used. One group worked with a resistance equivalent to 30% of their one-rep max. The other used a heavier resistance, 80% of one-rep max. One-rep max is the amount of weight you can only lift one-time using good form. Since doing a one-rep max test carries a higher risk of injury, some trainers use a 5-rep max test and use a calculator to extrapolate one-rep max from the 5-rep max.

Then, the researchers followed up with a second study. In this study, they measured how much force each of the guys generated when they kicked their leg with full intention. After measuring that force, they measured the kick force when they electrically stimulated their quadriceps muscles and compared the two values. Then, they subtracted the two values to get a measure called voluntary activation. This refers to the extra force your muscle is capable of when electrically stimulated. We don’t use all of the force a muscle is capable of.

The researchers found that the group that trained with a lighter resistance (30% of one-rep max) saw a 0.15% increase in voluntary activation, whereas the high-load group (80% of one-rep max) enjoyed a bump up of 2.35% in voluntary activation. The group that trained heavier was able to tap into more of their muscle strength voluntarily than the low-resistance group. That means they were able to harness more strength when lifting.

Why are heavy loads better for building strength? For a muscle to contract, an electrical signal from your brain has to move down your spinal cord to reach your muscles. After passing through neurons, or nerve cells, in the spinal cord, they finally connect with motor neurons. These motor neurons are separated from muscle fibers by a synapse or gap. When the electrical signal activates the motor neuron, it causes an impulse to be transmitted. This signal triggers the release of acetylcholine into the synapse. Acetylcholine then crosses to the muscle fiber where a sequence of events takes place that ultimately leads to muscle contraction.

The good news is you CAN build muscle size or muscle hypertrophy using lighter weights. In the study discussed, both groups enjoyed similar increases in muscle size despite the heavier group developing greater strength. The key to building strength with lighter weights is to completely fatigue the muscles you’re working.

How Heavy Do You Need to Lift to Build Strength?

When you first begin strength training, you may build some strength lifting weights that are relatively light, 50 to 60% of your one-rep max, assuming you fatigue the muscles. However, your muscles will quickly adapt. Once you’re no longer a novice, a resistance between 80 to 90% of your one-rep max is optimal for getting stronger. In most cases, you’ll only be able to do between 2 and 5 reps using a weight this heavy. You’ll also need a longer rest between sets, between 2 and 5 minutes, for the muscles to recover enough to lift heavy on the next set.

Of course, you don’t want to lift heavy every time you train. Maxing out during every session will create cumulative fatigue that can actually interfere with gains. No overtraining! Do a heavy workout every third session or periodize your workouts so you’re varying the stimulus you place on your muscles. Even if your goal is to develop strength, you don’t want to lift heavy or max out during every training session. Muscles also need adequate rest between sessions for adaptations to take place.

Lifting heavy, at 80 to 90% of one-rep max is most effective for building strength. However, using lighter weights, around 60% of one-rep max or even lower and fatiguing the muscle, will build muscle. So, know what your goals are and train accordingly.