Beyond Meat and Dairy: The Best Non-Meat Sources of Protein

Beyond Meat and Dairy: The Best Non-Meat Sources of Protein 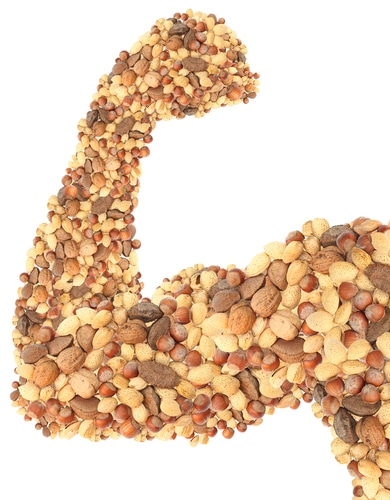 Athletes need slightly more protein than the general population, and most get it by eating meat and dairy products. But meat and dairy aren’t the only sources of muscle-enhancing protein. There are vegetarian and vegan athletes and bodybuilders who excel at their sport without eating a piece of meat. You don’t have to go vegetarian or vegan, but there are benefits to getting protein from non-animal sources.

The Benefits of Non-Meat Protein

Protein that comes from non-meat sources is lower in saturated fat and has higher levels of fiber and antioxidants. This means non-animal protein is healthful even for people who aren’t vegetarians. Meeting some of your protein requirements through non-meat and dairy sources will add diversity to your diet and offers other health benefits as well. Some research shows that eating processed meat increases the risk of some types of cancer.

So if you want to diversify, which vegetarian sources of protein will give you the most bang for your buck?

There are a variety of meat substitutes on the market formulated to meet the needs of vegetarians. Many of them are soy-based and contain significant amounts of protein. According to the Vegetarian Resource Group, the average veggie burger has 13 grams of protein and a single veggie dog has roughly the same amount. Dress a veggie burger up with sliced tomatoes, lettuce, and mustard, and you can enjoy a protein-rich burger sans meat at a calorie savings of about 50%.

Another meat substitute that’s growing in popularity is seitan or “wheat meat,” because it’s made from wheat gluten. It has a firm texture that’s slightly chewy, which makes it a good substitute for meat in recipes. Three ounces of seitan has 31 grams of protein, more than the amount in a hamburger patty. If you’ve ever ordered mock duck or mock meat at an Asian restaurant, you were probably eating seitan. You can find a variety of recipes for using wheat meat online.

Tofu and tempeh are other meat substitutes with respectable amounts of protein. Tempeh is made from fermented soybeans and has a meaty texture. Vegetarians often use it as a meat substitute in recipes. One cup of tempeh has a whopping 41 grams of protein. Since it’s fermented, it also contains natural probiotics that are good for gut health. Four ounces of firm tofu has 10 grams of protein, but it’s a non-fermented form of soy so you don’t get the probiotic benefits. Soy milk is another decent source of protein. It has almost as much protein as a glass of milk (7 grams per cup) and is usually fortified with calcium and vitamin B12, two nutrients vegetarians don’t get enough of.

Other Non-Meat Sources of Protein

Lentils and beans are good sources of non-meat protein. Lentils top the list of veggie protein sources – for good reason. A single cup of lentils has 18 grams of protein. With the exception of soybeans, most other beans have 10 to15 grams of protein per cup. When you substitute beans and lentils for some of your animal protein, you get more heart-healthy fiber and antioxidants. In fact, black beans top the list of foods with the most antioxidant power. Beans are also highly filling because of their high fiber content. Beans and lentils are low in the essential amino acid methionine, but you can fix that by eating beans with whole grain foods such as quinoa or brown rice or by simply varying your protein sources.

Don’t Forget About Nuts and Vegetables

Two tablespoons of peanut butter have 8 grams of protein, while an equivalent amount of almond butter has 5 grams. Almond butter is a good source of heart-healthy monounsaturated fats and vitamin E, an antioxidant vitamin that keeps cells healthy. Spread almond butter on a slice of whole-wheat bread, and you’ll add another 2 grams of protein. For a protein-rich snack, eat a handful of sunflower seeds. You’ll get 6 grams of protein and over half of your vitamin E requirements.

Some veggies are a respectable source of protein too. A cup of cooked spinach has 5 grams of protein, while a cup of antioxidant-rich broccoli has 4 grams. Now we know why Popeye had such big muscles. Veggies may be green, but that doesn’t mean they’re devoid of protein.

Protein comes in forms other than meat and dairy products. Vary your diet by enjoying some of these veggie protein sources – and reap the health benefits.

Is Plant Protein as Satiating as Animal Protein?

Plant-Based Protein: Why You Need More of It

Branched-Chain Amino Acid Supplements: Why You Don’t Need Them

2 Factors That Determine the Quality of a Protein

6 Nutrients You Find Only in Meat and Dairy