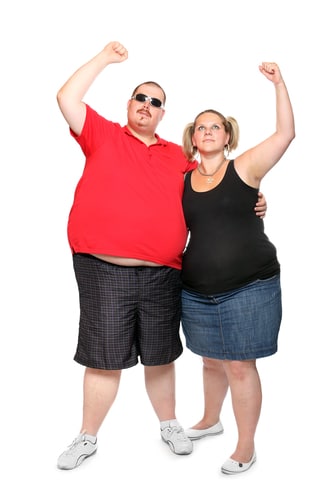 There’s much more focus in the media on overweight or obese women than overweight men. In the celebrity world, a woman only has to gain a few pounds for it to be noticed. The media doesn’t focus on as much on weight issues in men – but that doesn’t mean men have fewer weight issues. According to an article in the New York Times, women experience discrimination when their BMI climbs above 27 whereas men don’t experience weight discrimination until their BMI reaches 35. Despite this, obesity rates are actually growing faster among men than women. Surprised?

The Problem of Obesity: Does It Affect Men More Than Women?

According to John La Puma, M.D, author of an upcoming book, “Men Don’t Diet, Men Refuel,” there are more overweight men than women. Plus, the number of overweight men is growing faster than the number of women. Between the years 2000 and 2008, the average BMI for men rose from 26 to 30 while it remained stable at around 27 for women. Sixty-four percent of women were overweight or obese during this same time period, but that number climbed to 72% in men.

Men have gradually gotten heavier over the years. According to the Journal of Economic Perspectives, the average man weighed 168 pounds in 1960. Today he weighs 180 pounds. Relative to women, men have greater amounts of deep belly fat, also known as visceral fat, compared to women. That’s not a good thing when it comes to health. Visceral fat is linked with a greater risk for heart disease and type 2 diabetes. What’s more disturbing is men already have a shorter average lifespan than women (76 years versus 81 for women) as it is and the “expanding waistlines” of men nationwide isn’t doing much to help the problem.

Male Obesity Rates Have Caught Up to and Surpassed Women’s

Men haven’t always been the more overweight sex. According to statistics from the National Center for Health Statistics, between 1999 and 2000, there were more obese women than men. By the late 2000s, men had caught up to women and had started to inch past them in terms of overweight and obesity rates.

Why are men these days more overweight or obese? As this study points out, men are less focused on taking care of their health. Fewer men see their doctor regularly compared to women and they’re less likely to see their doctor for preventative care – but that’s not the only explanation.

Other Reasons Obesity Rates Are Growing in Men

There’s another disturbing trend that may partially explain why men are becoming more overweight and obese. Testosterone levels in men have been slowly declining over the years. This decline is greater than what would be expected from aging alone. In the late 1980s, the average 50-year-old man had a higher testosterone level than a 50-year-old man in the mid-1990’s.

Why might this be? Some experts believe it has to do with environmental factors. Men are exposed to more hormonally-active toxins like pesticides and phthalates in plastics these days. Some of these chemicals are known to disrupt hormones. When testosterone levels drop, insulin resistance increases, setting off a cycle of reduced insulin sensitivity, weight gain and increased visceral fat. Visceral fat aggravates the testosterone problem by converting some of the testosterone to estrogen.

On the plus side, men have some advantages over women when it comes to controlling their weight. They have a higher percentage of lean body mass, giving them more metabolically active muscle tissue. Plus, men are usually bigger and burn more calories at rest and with activity compared to women. Men are also more likely to play sports and be physically active. Despite these advantages, men apparently aren’t winning the war against obesity.

Men are catching up with and surpassing women when it comes to obesity rates. Despite having some advantages over women, like more muscle mass, the numbers of men who are overweight or obese are on the rise. Men may have some advantages when it comes to controlling their weight – they have more metabolically-active muscle tissue – but it’s possible to override those advantages through poor lifestyle habits. In addition, other factors like exposure to materials that disrupt hormones may be a factor in the growing rate of obesity in men AND women. Fortunately, we can reduce some of that exposure by choosing organic products and by making healthy dietary choices.

StatCrunch. “Illustration of The Exercise Habits of Men and Women”

Staying a Healthy Weight: 5 Ways French Women Get It Right