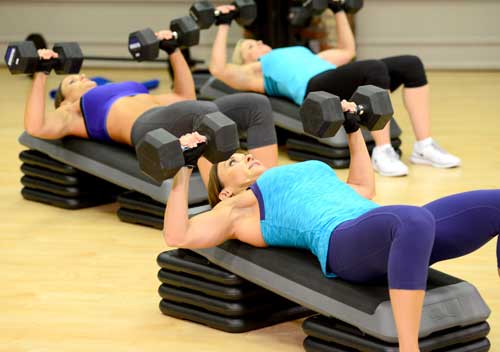 Possibly the most important resistance training principle is that of progressive overload. The principle of progressive overload says what you probably already know: Your muscles won’t continue to grow unless you subject them to more stress than they’re accustomed too. It’s overload that forces your muscles to adapt by becoming stronger and larger. If you’re trying to build strength you primarily overload your muscles by adding more resistance to your lifts. If your goal is to increase muscle endurance, you do it by gradually adding more volume to your sets. To jumpstart muscle growth, you increase resistance AND volume over time since muscles grow in response to both.

Keep in mind that progressive overload needn’t occur in a linear fashion. When you’re first starting out, focus on getting the form right before adding more resistance. If you’re eating right and training regularly, you’ll probably make rapid gains in the first few months, but after that, you’ll have to work harder for those gains. At some point, you’ll want to periodize your workouts so you cycle the stimulus you place on your muscles during different phases to avoid plateaus and overtraining.

If you’ve ever worked out at a gym, you probably noticed people who lifted regularly but never seemed to change. Usually, it’s because they do the same routine using the same resistance day after day and month after month. To see change, you have to increase the challenge over time. If you’re trying to build strength, you shouldn’t be lifting the same weight today that you did three months ago. To monitor your progress, keep a written log so you can look back and see if you’re progressing over time or whether you’re staying stagnant.

The principle of specificity is referred to as SAID (specific adaptation to imposed demand). The SAID principle simply states that adaptations are specific to the type of training you do. For resistance training, if you train using lighter weights and high reps, you’ll build muscle endurance, but strength gains will be limited.  Likewise, if you use high resistance and low reps, you build strength but gain little endurance. SAID doesn’t just apply to resistance training, it holds for any type of athletic training you do. An athlete doesn’t become an awesome sprinter by running long distances or doing kickboxing workouts. They power up their ability to sprint by sprinting. Similarly, when you train to become better at a particular sport, the exercises you do should mimic movements you do when you play that sport.

Some people train with light weights and high reps and expect to get stronger. It’s not going to happen. With lighter weights, you target mostly slow-twitch muscle fibers, ones optimized for endurance. With heavy resistance, you recruit mostly fast-twitch fibers, ones designed for strength and power. You might make some strength gains, in the beginning, using lighter weight, because of neurological adaptations, but you’ll quickly reach a plateau. Recent research suggests it’s possible to build muscle using lighter weights, especially if you lift to failure, but don’t count on making significant strength gains.

The take-home message? Think about what your objectives are and tailor your training around what you’re trying to achieve. Then make your training adaptation specific.

This is a principle most of us wish didn’t exist. You sweat and train to build up a certain level of strength and muscle size. Then you stop training for a few months and slowly lose those gains.  All of that hard work for nothing? The good news is muscles have “memory.” Once you carve the neurological pathways that made you stronger, you regain strength faster even after taking a long break.

Even building muscle size is easier the second time around. When you resistance train, the number of nuclei within each muscle cell increases. Scientists used to think you lose these nuclei when you stop training. Turns out you don’t (based on animal studies). Since you still have those extra nuclei, regaining muscle size is faster the second time.

How Some People Get It Wrong:

The quickest way to “get it wrong” is to stop training. Regrettably, sometimes life gets in the way or you experience an injury that keeps you from working out. Rather than quitting entirely, try to modify your routine in a way that won’t aggravate the injury or make it worse. If your lower body is injured, work your upper body. Do what you can to stay active. If time is the reason you can’t workout, do short, intense workouts that get the job done quickly. Even if you can’t do anything for a few weeks or months, muscle memory is still on your side.

Each of us responds to resistance training in a different way based on age, gender, genetics, training and nutrition. Some people build muscle easily while others have to work hard to see a significant change. In general, women and older people have to train more intensely to build muscle, partially due to differences in hormonal make-up. That doesn’t mean you can’t build muscle or increase your strength. It just might take longer for you than it does someone else.

Don’t let age stop you. Studies show that even people in their ninth decade of life are capable of increasing muscle size and strength. Research shows elderly people need to train at a higher intensity (greater than 85% of one-rep max) and will gain the most benefits by more frequent training, 3 to 4 times a week.

Keep these training principles in mind and violate them at your own risk. They’re backed by a number of research studies. The good news is they can work in your favor if you let them.

5 Tips for Working with Heavy Weights

Is Resistance Training Better Than High-Impact Aerobics for Bone Health?