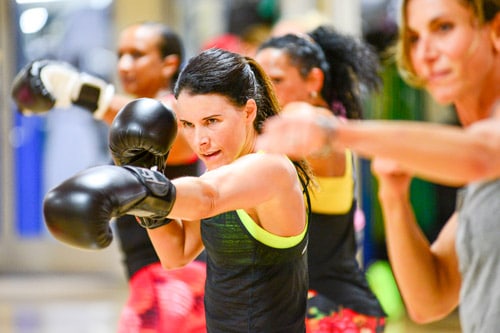 For example, when you lift weights, you typically rest for variable periods of time between each set to give your body time to recover. The rest period between sets helps your muscles bounce back enough to maximize your lift on the next set. However, it also reduces calorie and fat-burning benefits. With metabolic conditioning, you reduce or eliminate the rest periods so that your body is placed under more stress.

There are several approaches you can take to reap the benefits of metabolic conditioning. Here are some of the most common.

With circuit training, you move quickly from one resistance exercise to the next with little or no rest. It’s the lack of recovery between exercises that create the metabolic conditioning effects and the resulting after-burn. The key is to train with intensity on each exercise and rest only long enough to push hard on the next one. Circuit training with light weights or with longer rest periods doesn’t place enough stress on your body to elicit a metabolic response. The exercises you do during a circuit workout run the gamut from movements using weights, bodyweight exercises or explosive movements like kettlebell swings or medicine ball throws. For maximum metabolic conditioning, the circuits should be challenging and the rest periods minimized.

Not all interval-style workouts are true metabolic workouts. An interval-style metabolic conditioning workout is one where the active intervals are intense enough to leave you breathless. During these intervals, your body releases catecholamines, your body temperatures rises, you breathe hard, and lactate builds up in your muscles. The benefit of lactate is it stimulates the release of growth hormone and testosterone. In other words, during a metabolic HIIT workout, your body is under metabolic stress and it responds with greater hormone release.

Tabata-style workouts are an example of an interval-type workout that taps into anaerobic energy pathways. They’re structured so that you do 20 seconds of intense activity followed by 10 seconds of recovery. You repeat this sequence for 8 rounds total. Most people do 2 to 3 rounds in total. During the short intervals, you work at near maximum intensity. As you might expect, this places stress on your body and leads to greater fat burning and release of anabolic hormones.

A standard strength-training workout doesn’t qualify as metabolic conditioning but you can turn it into one. To supercharge the metabolic benefits of strength training, choose compound exercises that work multiple muscle groups, especially lower body muscles, lift heavy, and minimize the rest between sets. Think heavy barbell squats and deadlifts, as opposed to isolation exercises that work a single, small muscle group, like biceps curls or triceps extensions. Add bodyweight exercises too, like dips, push-ups, and pull-ups. A metabolic strength-training session should get your heart rate up more than a standard session and should feel exhausting.

The drawback of metabolic conditioning is it’s challenging and stressful on your body – but with stress and challenge come change. Such workouts are ideal for getting leaner and the greater anabolic response helps with muscle building as well. Metabolic conditioning workouts are also a plateau buster when you’re trying to get leaner. With the metabolic-conditioning after-burn, you boost fat burning for hours after a workout. Plus, this type of training can help you reach a higher level of conditioning. So, if you’re looking for a way to kick your workout up a notch, give it a try.

Boost Your Metabolism & Break Through Plateaus with PHA Training

Fitness Training: the Three Energy Systems and How to Target Them