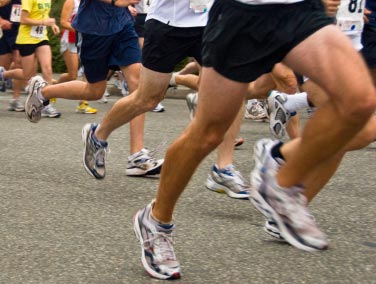 Exercise increases the demand for energy in a big way. In fact, at the highest levels of exercise intensity such as sprinting, energy needs can be as much as 120-times greater than at rest. To meet these demands for more energy, your body can use one of three different energy systems. The one it chooses depends upon the duration and intensity of the exercise.

ATP is the Form of Energy Used By Cells

ATP, also called adenosine triphosphate is an all-important structure, because it’s the energy currency of the body. It consists of an adenosine molecule with three inorganic phosphate bonds attached. When the third phosphate is cleaved from ATP, it releases energy that’s used to fuel cell activity. ATP is the form of energy used by every cell in the body including muscle cells. You can only store a small amount of ATP inside cells, which is only enough to provide energy to power a few seconds of very high-intensity exercise. There’s another compound with a high-energy phosphate bond inside cells called creatine phosphate. Creatine phosphate can donate its phosphate bond to ATP to provide additional energy for brief periods of exercise. The combination of stored ATP and creatine phosphate is called the phosphagen system of energy production.

When stores of ATP and creatine phosphate are used up during the first seconds of exercise, these high-energy compounds need to be regenerated. At this point, a second energy system comes into play called the glycolytic system. This system is fueled mainly by the breakdown of stored carbohydrates in the form of glycogen through a process called anaerobic glycolysis. This system is convenient because it doesn’t require oxygen to produce ATP, which is in short supply during the first seconds of exercise.

The glycolytic system provides a quick source of ATP to fuel muscle activity, but there’s one drawback to this system. It leads to the accumulation of lactate since oxygen isn’t available. When lactate starts accumulating, muscles become more fatigued, although the fatigue may not be due directly to the lactate itself but to the accumulation of other products such as hydrogen ions and inorganic phosphate that are increased as lactate is formed. Lactate can only be removed once oxygen enters the picture and the oxidative or aerobic system comes into play.

The Oxidative or Aerobic System

The final system for generating energy to fuel exercise is the oxidative or aerobic system. This system requires oxygen, but it can sustain activity for long periods of time in contrast to the previous two systems. These systems are limited by ATP and creatine phosphate stores and the build-up of lactate. The oxidative system can use both carbohydrates and fats as fuel, but it mainly uses fat during periods of moderate exercise. It can also use protein in the form of amino acids, but this is usually a minor source of fuel if a person is consuming enough calories.
It’s the aerobic system that provides most of the energy for sustained exercise when there’s plenty of oxygen available. If exercise intensity increases to the point that oxygen availability is reduced, the glycolytic pathway again becomes the predominant energy producer using carbohydrates as fuel. Lactate again builds up, and muscles become fatigued. This happens when you’re running at a steady-state and suddenly break into a sprint. Not surprisingly, you become fatigued quickly when you’re dependent upon the anaerobic glycolytic system for fuel. You have to slow down so you’re using the aerobic system for ATP production again.

How Do All of These Systems Relate to One Another?

These three systems all work together to produce energy the body needs for exercise. The phosphagen system serves as an immediate source of energy during the first few seconds of short-term intense exercise such as sprinting a short distance or lifting a heavy weight. These activities are of very short duration and require a readily available source of ATP.

Once the phosphagen system is depleted, the body initially uses the glycolytic pathway for energy. Then as more oxygen becomes available, the oxidative system enters the picture. After the first minutes of exercise, a combination of glycolytic and aerobic energy production is used with the ratio depending upon the intensity of the exercise.

For light to moderate intensity exercise, the oxidative system predominates, and it uses mostly fat as fuel, but if you pick up the intensity and break into a sprint, the glycolytic system assumes more importance, and more carbohydrates are burned as fuel. Fatigue can happen quickly in this case, depending upon a person’s level of fitness as lactate and other compounds that affect muscle function build up. In most cases, the body uses a combination of these energy systems to meet its fuel needs, and the one that predominates depends upon the duration and intensity of the exercise.

The Body is an Energy Generating System

As you can see, the body has a very effective system for generating the energy it needs to fuel exercise. It’s a system designed to keep you exercising efficiently.

How ATP Affects Your Workout