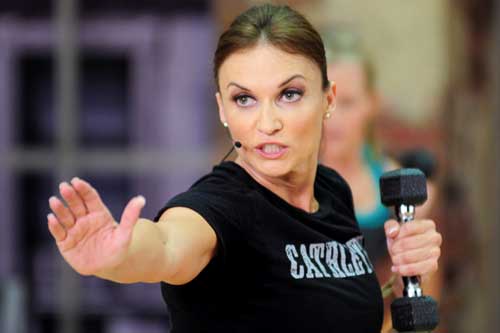 To maximize your fitness benefits, you need to do the types of exercise that help you accomplish your goals. Your body taps into three energy systems when you exercise. The energy system that’s maximally activated depends on the intensity and duration of the exercise you’re doing. For example, high-intensity exercise taps into energy pathways that don’t require oxygen, while moderate-intensity cardio uses mainly aerobic energy pathways. You can target each of your energy systems by the type of exercise you do. First, let’s look at each energy system your muscles use during exercise and then see how you can target each one.

The ATP-CP or phosphagen system is the first energy system called into action when you start exercising. Unfortunately, your muscles have only limited stores of ATP, the source of fuel your muscles use to contract. These stores are exhausted within a few seconds. Once muscle ATP is depleted, after the first few seconds of exercise, muscle contraction will stop unless your muscles have a way to re-synthesize it. One way it does this is by accepting a phosphate group from a high-energy compound stored in your muscles called creatine phosphate. This phosphate group is used to reform ATP.

The Glycolytic Pathway for Energy Production during Exercise

The second fastest way your muscle cells can use to fuel exercise is the glycolytic pathway. This pathway can produce ATP without oxygen being present. It uses muscle glycogen as its primary fuel source. Although it’s fast, it doesn’t produce a lot of ATP, only enough to fuel between 30 seconds and 3 minutes of exercise. It’s the predominant energy pathway used in high-intensity intervals and medium-intensity strength training where the movements are intense but not sustained for long periods of time. Once your muscles have used up the ATP produced through the glycolytic pathway, lactic acid, and hydrogen ions build up, your muscles fatigue and you have to stop. Alternatively, your body can tap into a third energy pathway called the oxidative pathway.

The oxidative system is a relatively slow system for producing ATP and only works in the presence of oxygen. Despite the fact that the oxidative pathway is slow, it can produce enough ATP to sustain activity for long periods of time at a sub-maximal intensity. The oxidative system mainly uses fat as a fuel source. It’s the primary fuel source you use during low to moderate-intensity activity like cycling or jogging for long distances.

The three energy systems work together to supply your body’s energy needs. The one you predominantly use depends on the intensity and duration of the exercise you’re doing. This means you can target a specific energy system by the type of exercise you do. Many people focus so much on training their oxidative pathway through steady-state cardio. As a result, they miss out on the benefits of anaerobic training and maximizing the efficiency of their glycolytic and phosphagen systems.

Why should you focus some of your exercise time on targeting anaerobic pathways? The intense activity needed to maximally tap into these systems activates fat-burning hormones like growth hormone and adrenalin. Such high-intensity exercise elevates your metabolism for hours after your workout is done. You’ll also target a greater percentage of fast-twitch muscle fibers to build stronger, more powerful muscles.

If you play certain types of sports, you can target the energy system you maximally use when you play that sport. For example, if you play sports that require quick bursts of activity like volleyball, basketball or sprinting, devote a portion of your workout time to exercises that maximize your phosphagen and glycolytic pathways. Long-distance runners will benefit most from training that targets their oxidative pathway.

Training Your ATP-Cr or Phosphagen System

Exercises that train your phosphagen system are short, intense moves like sprints and plyometric moves like box jumps and squat jumps. Heavy-resistance weight training, doing between 5 and 8 reps, also targets your ATP-Cr system. Interval training with intense active intervals of 20 seconds and recovery periods of several minutes also maximally targets the phosphagen system. What are the benefits of doing so? You’ll build greater strength and power.

One of the best ways to target your glycolytic system is through interval training. For targeting this system, the active intervals should be slightly longer than for the phosphagen system and rest periods should be shorter. For example, 30 to 40 seconds of active work and one or two minutes of rest between each active interval. Kettlebell workout and moderate-intensity resistance training with reps between 8 and 12 also target the glycolytic energy system. When you focus on exercises that maximally train this system, you get a strong after-burn effect that boosts your metabolism.

The way you structure your intervals for interval training and the weight and number of reps you do during resistance training affects what energy systems you maximally target. Longer active intervals with roughly equal recovery periods target your oxidative pathways. Short active intervals and longer recovery periods maximally activate anaerobic pathways like the phosphagen and glycolytic systems that build strength, speed, and power. Knowing this gives you a way to structure your training to get the benefits you want and to help you improve performance in certain sports.

3 Types of Metabolic Conditioning Workouts and the Benefits of Each

What Are Metabolic Conditioning Workouts and What Benefits Do They Offer?

One thought on “Fitness Training: the Three Energy Systems and How to Target Them”