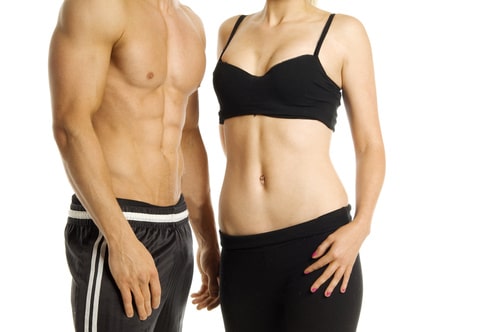 Are women at an unfair advantage when it comes to losing body fat? It would certainly seem to be the case. When a man and a woman go on a weight loss diet, men typically lose faster than women do. This can be a source of frustration for a couple who try to lose weight together. Do women really lose body fat more slowly than men, and, if so, why?

First, the facts. Women have, on average, 8 to 10% more body fat than men. Plus, men have a resting metabolic rate between 4 and 10% higher than women of the same size and weight. Why might this be?

The most obvious explanation for weight loss discrepancies between men and women is men have more metabolically-active muscle tissue. Due to differences in lean body mass, men burn up to 20% more calories at rest than women do. Unfair, but true. Of course, you can “even things up” a bit by resistance training and building more lean body mass. Building more muscle is one of the best ways to boost a sluggish metabolism and burn more calories even when you’re sleeping.

Fat Distribution is Different between Men and Women Too

You’ve probably noticed that men are more likely to put on weight centrally, in their waist and tummy, compared to women who store it in the hips and thighs before menopause. They also have higher levels of visceral fat, the type that increases the risk for health problems like heart disease and type 2-diabetes. After menopause as hormonal fluctuations takes place, women store fat in more of a “male pattern,” around their waist, but before menopause, fat storage between the two sexes is quite different.

Pre-menopausally, women typically have the easiest time losing fat from their arms and trunk region and the most difficulty shedding lower body fat, especially from their thighs. A study published in the Journal of Applied Physiology found that women who took part in a six month aerobic and resistance training program lost the greatest amount of body fat from their arms while losing little or no fat in their lower body.

Interestingly, women burn a greater ratio of fat to carbohydrates during exercise and are better able to mobilize stored fat during exercise than men. The opposite seems to be true in a non-exercising state. Women are more efficient at holding onto fat at rest. In fact, research shows that after exercise is over and women return to a resting state, they oxidize fewer fatty acids than men. Why might this be? Experts believe that differences in hormonal makeup between men and women account for these differences.

Contrary to popular belief that women are the bigger emotional eaters, both men and women take part in this habit. The difference is in the type of “comfort foods” they choose when they nibble. Women gravitate towards sugary foods while men reach for foods higher in protein like steak, hamburgers or pizza. The latter is less likely to lead to an increase in body fat than foods that are high in simple carbs.

Women have to work a little harder than men to lose body fat but it can be done. The best approach is to focus on high-intensity interval training for cardio to create a hormonal environment that favors fat breakdown AND to resistance train using weight that’s challenging enough to break down muscle fibers and increase lean body mass. This is exactly the type of workout you will get from my XTrain videos.

Men and women don’t lose body fat at the same rate or in the same distribution. This means women need to boost the intensity of their exercise training to maximize the results they get.

Strength-Training vs. Cardio: Which is More Effective for Weight Loss?