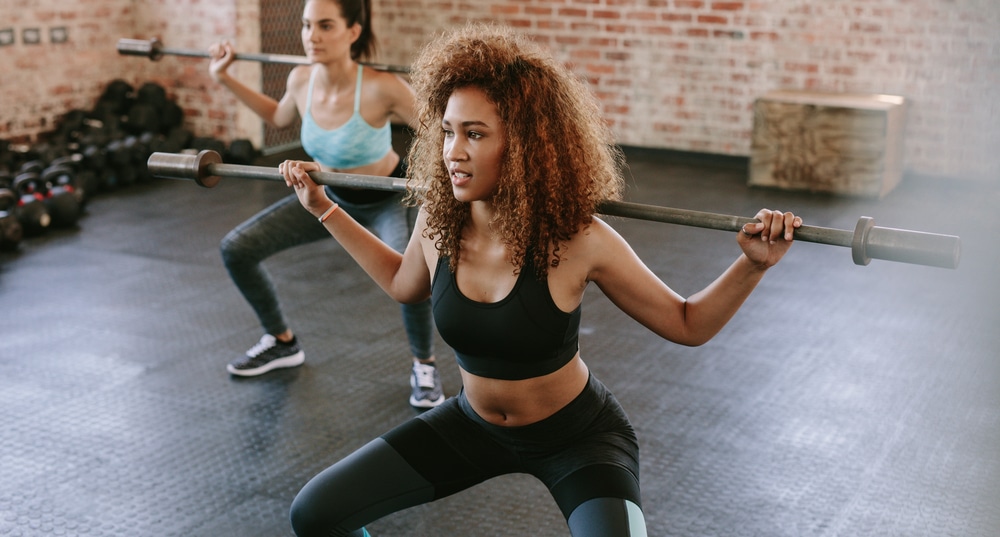 It’s the most basic lower body exercise. Who doesn’t do some form of squat when strength training? Yet, not everyone does them using proper form or gets the full benefits that this compound exercise offers. As you know, compound exercises are those that work more than one muscle group and joint at a time. This is in contrast to an isolation exercise that involves movement around a single joint and muscle group. For example, leg extensions are an isolation exercise while squats are a compound exercise. When you work multiple muscle groups during a single exercise, it creates a greater metabolic response and a more of a calorie burn as well. Plus, compound movements improve functionality, the way the muscles function together. Squats are so beneficial for building lower body strength that they’re sometimes called the “king of exercises.”

One problem that some people have with squats is they don’t descend low enough into the squat to get the full benefits. Squat depth matters. Shallow squats work the quadriceps and hamstrings but don’t stimulate the glute muscles as effectively. That’s a problem if you’re a female and play any kind of sport. Most women are quadriceps dominant and have more strength and power in the quads than in the hamstrings and the glutes. When you don’t reach an appropriate depth when you squat, you’re further reinforcing this muscle imbalance. Partial squats simply don’t offer the same benefits as going deep, especially for the glutes. If you work an office job, you start out with weak glutes due to too much sitting. Sitting for long periods of time tightens the hip flexors and weakens the hip extensors. Deep squats that activate the glutes help you conquer this muscle imbalance.

Squat Depth: How Low Should You Go?

Why do so many people hesitate to squat deeply? For one, it’s harder to do. When you squat below parallel, you typically have to use less weight than when you do for a partial squat. So, it’s kind of a vanity thing for people who work out at a gym. They can place a heavier barbell on their back when they do shallow squats and it looks like they’re stronger than they actually are.

Squat Depth: Forces on the Knees When You Squat

The concern about squatting deeply is that the rise in compressive forces as you descend lower and lower could damage the cartilage. Fortunately, studies show that stress on the patellofemoral joints doesn’t increase with deep squats. Yet, force on the tibiofemoral joints does increase when you descend past parallel. However, studies show that the knee joint is perfectly capable of handling these forces. In fact, elite male weightlifters that frequently squat deep and do so at a high velocity have a very low rate of knee injury.

Actually, the greatest shear force on the back of the knees is at around 30 degrees into a squat descent. When you compare squats to knee extensions, knee extension, being an open-chain exercise, places more shearing force on the knees than does a deep squat. Once you descend beyond 90 degrees the shear forces actually decrease as compressive forces predominate. Yet, healthy knees seem capable of handling the compressive forces placed on your knee joints when you do a deep squat.

The key to getting it right and not injuring yourself is to use less resistance until you’ve perfected your form and also slow the speed of your reps. When you do squats rapidly, especially with resistance, it increases both the compressive and shearing forces on the knees relative to when you do them at a slower tempo. Your body composition can also make it harder or easier to do a deep squat. It’s more challenging for people with long legs and a short torso to do a deep squat.

The stance you use when squatting also impacts the stress on your knees. If you place your feet close together in a narrow stance squat, it increases shearing forces on the knees. So, widening your stance helps protect the ligaments in your knees by reducing shearing. Wide stance squats also activate the glute muscles more.

Should You Do Deep Squats?

As many experts point out, deep squats, assuming you do them with good form, may actually protect your knees against future injury. Most studies show that squatting below 90 degrees isn’t harmful as long as your knees are healthy. What’s more, studies demonstrate that deeper squats (to 120 degrees) are more effective for building lower body strength. As mentioned, deep squats, especially using a wide stance, also activate your glute muscles more. If you have healthy knees, going below parallel is safe if you use good form. Practice your form on deep squats using no resistance and a slow rep speed before adding resistance.

If you’ve had a knee injury or have arthritis involving the knees, talk to your physician before doing deep squats – but if your knees are healthy, give it a try.

How Squat Depth Impacts the Muscles You Work

Front Squats vs. Back Squats: Does One Have an Advantage Over the Other?

Squat Depth: How Low Should You Go?

When Squats Hurt Your Back

Anatomical Problems that Affect Squat Form and How to Correct Them