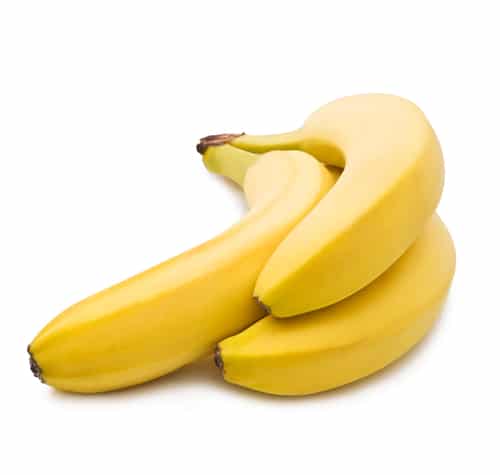 Are you still sipping a sports drink to get your carbs and electrolytes during a long workout? You may be able to ditch the sports drink for fruit, more specifically, a banana. A new study shows that bananas have more going for them when it comes to replacing lost electrolytes and replenishing glycogen stores than commercial sports drinks – and they’re a lot less expensive.

Bananas are a good source of vitamins, minerals, and carbohydrates, but can they compete with sports drinks for replacing lost carbs and electrolytes? Researchers at Appalachian State University’s performance lab in North Carolina put bananas to the test. Seasoned cyclists were asked to eat half of a banana every 15 minutes or drink a cup of 6% carbohydrate sports drink every 15 minutes during a 3-hour simulated road race. To see what effect each carb source had on performance and body physiology, they took blood samples from the cyclists to measure a variety of parameters including glucose levels and markers for inflammation. The results?

Cyclists that snacked on bananas performed as well during their intense cycling run as those who drank a sports drink. Their glucose levels were similar too. The researchers pointed out that munching on bananas during a long exercise session has advantages over drinking a sports drink. Like sports drinks, bananas are a good source of potassium, a mineral lost during intense exercise. They also contain natural antioxidants that could help to reduce muscle damage and soreness.

Other Benefits of Eating Bananas for Active People

Bananas are one of the best sources of vitamin B6, a vitamin that’s important for carbohydrate metabolism, and they’re a natural source of carbohydrates. A single banana supplies a fifth of a day’s requirement for vitamin C, an antioxidant vitamin that helps to protect cells from damage, reduce inflammation and boost immunity. You won’t find artificial flavors or colors in a banana as you’ll find in some sports drinks. Bananas are a 100% natural carbohydrate and electrolyte source.

Most sports drinks come in plastic bottles where you have to worry about BPA in the plastic leaching out into the liquid. BPA has been linked with endocrine dysfunction and an increased risk of hormone-related cancers in animals. Bananas are also a good source of fiber, which most people don’t get enough of.

Bananas fall short in one area – sodium. Bananas only have a fraction of the sodium that most sports drinks do. If you exercise hard, especially on a hot day, you can lose a significant amount of sodium, and bananas aren’t ideal for replacing it. Eat bananas for their carbs and potassium, but sip water with a pinch of added salt to stay hydrated and replace sodium lost through sweating.

Bananas are a natural source of energy, electrolytes, and antioxidants. This makes them a good replacement for a sports drink. If you choose to eat bananas during a workout to replace carbs and electrolytes, make sure you’re drinking water to stay hydrated and getting enough sodium by adding salt to your water. Next time you’re at the supermarket, skip the sports drink and stock up on bananas instead.

Sports Drinks and Hydration Beverages: What Are the Different Types and Do You Really Need Them?