Which Beverages Are Most Hydrating?

Which Beverages Are Most Hydrating? 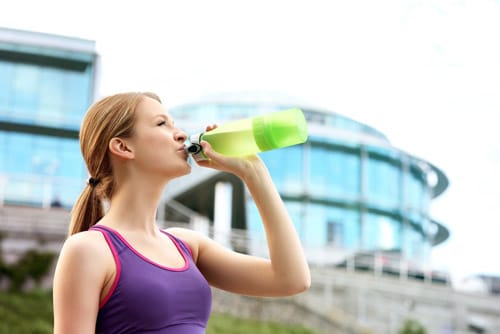 Staying hydrated is essential for health and exercise performance. Even mild hydration, around the point that you first start feeling thirsty, can cause fatigue or headache. When you’re working out, especially in a warm or humid environment, you lose a significant amount of fluid and electrolytes through sweating. With mild dehydration, your heart rate during exercise increases and you feel like you’re working harder than you actually are. If you’re doing floor exercises and get up from a sitting or lying position quickly, you might feel dizzy due to mild dehydration. You might not have the same motivation to push yourself when your body is crying out for water.

What’s the best way to stay hydrated? Some people guzzle a fancy sports drink or other beverage with added taste while others stick with plain, old water. If you’re exercising for more than 90 minutes, especially in a setting where you’re sweating a lot, an electrolyte-rich drink may be a better option than water since long periods of exercise may lead to significant electrolyte loss. Otherwise, water is okay.

You often hear people say you should avoid using coffee or tea to rehydrate because they’re mild diuretics. However, studies show that drinking tea or coffee doesn’t lead to a net fluid loss. So, these beverages are suitable for fluid replacement as well.

In the study, researchers had participants drink a liter of various beverages and calculated how much fluid they lost in their urine. On the basis of this, they gave each beverage a beverage hydration score, indicating the effectiveness with which each drink was retained by the body. The beverages they looked at included still water, sparkling water, diet cola, cola, sports drink, oral rehydration solution, orange juice, lager, coffee, tea, cold tea, regular milk, and skim milk.

The results? Three beverages outperformed water in terms of rehydration. Oral rehydration solution (a solution used in medical settings for rehydration) and milk topped the list. Both were better retained by the body than water. Orange juice followed closely behind. You might think water is the ultimate hydrating beverage but fluids that contain salt or sugar cause your body to hold on to fluids better than plain water. You have probably had the experience of feeling bloated after eating a high-salt meal. That’s fluid retention in action. Drinks that contain fat move more slowly through the digestive tract and delay loss of water as well, although they aren’t always practical when you’re working out since they can cause tummy upset.

Surprisingly, tea and coffee in this study didn’t lead to significantly greater fluid loss over water and the results were similar for still water and sparkling water. So, if you enjoy hydrating with coffee or tea, there’s no reason not to. As you know, caffeine also enhances exercise performance for endurance exercise but not for short periods of high-intensity exercise. HOW does it improve endurance? When you have caffeine on board, your body can more efficiently tap into fat stores as fuel. This conserves muscle glycogen so that you don’t fatigue as quickly. Caffeine may also help with exercise recovery.

Also, surprising is the study showed that sports drinks aren’t that much better than water for hydration. Plus, they cost more and come in plastic bottles, often made with bisphenol-A (BPA) It’s possible that some sports drinks have a greater ability to hold onto water. It depends on their electrolyte composition and how much sugar they contain. Cola and diet cola was also slightly better than water at maintaining hydration, possibly because of their higher sodium content. Of course, there are other problems associated with drinking soft drinks making them one of the least desirable choices.

What Can You Conclude?

Based on this study, a sports drink may not be significantly better than water for rehydration and orange juice and milk appear better than both. Other studies confirm the rehydration benefits of milk. In fact, a study showed that chocolate milk with its 4 to 1 carbohydrate to protein ratio is an ideal recovery drink after endurance exercise. Researchers at the University of Maryland School of Public Health found that milk outperformed popular sports drinks by up to 17%. All in all, milk performs as well for rehydration as oral rehydration beverages used in medical settings. Plus, it helps with recovery. Still, if drinking milk during a workout doesn’t appeal to you, orange juice ranks almost as high in terms of its beverage rehydration score.

Even though orange juice and milk have higher beverage rehydration scores than water, water is an acceptable alternative as long as you aren’t losing a significant quantity of electrolytes and glycogen depletion isn’t an issue. If it is, a drink with electrolytes and carbohydrates is the safest alternative.

The most important tip is to make hydration a priority for both your health and your performance. Here are some other tips:

·       Weight yourself before and after a workout. For every pound you’re down, drink 2.5 glasses of water or other rehydration beverage.

·       If you’re taking certain medications, including high blood pressure meds or diuretics, you’re more at risk of dehydration during exercise and need to be especially careful about staying hydrated.

·       If you have dark urine after a workout, you’re not hydrated enough. If you’re well hydrated, your urine should be pale yellow in color or almost clear.

·       Don’t depend on thirst to be your guide. You often don’t feel thirsty until you’re already mildly dehydrated.

·       Take hydration seriously. It matters to your health and your workout.

Training Peaks. “The Benefits of Caffeine for Endurance Athletes”

Precision Hydration. “How Well Do Different Drinks Really Hydrate You?

Coach and Athletic Direction. “Five Hydration Mistakes and How to Correct Them” July/August 2014.

Coconut Water: Superfood or Not?