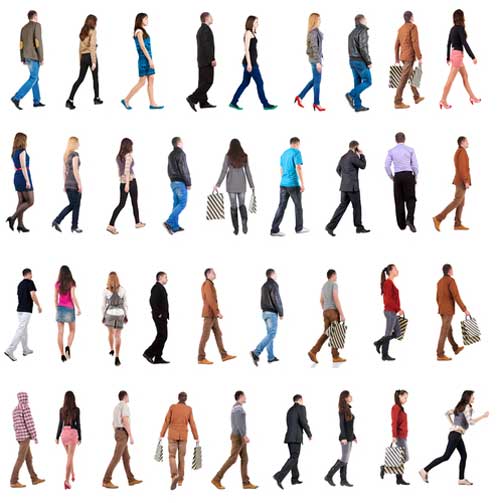 Walking: It Takes More Brain Power than You Think

Putting one leg in front of the other to walk sounds pretty straightforward but it requires more brain power than you think. You have to have good motor and balance skills and you have to be aware of terrain changes and obstacles in your path to avoid a collision or fall. Walking also requires coordination skills. Because walking quickly requires a certain degree of brain power, researchers have looked at whether walking speeds are correlated with brain health.

Other studies show a similar link between walking speed and brain health, enough to make experts think a reduction in walking speed could be an early warning sign of cognitive problems even before memory changes appear.

Walking Speed: A Marker for Mortality

How fast you walk may say something about your risk of dying too. When researchers gathered walking speed data on more than 38,000 people and compared it to death rates over a ten year period, they found a link between slower walking speeds and a greater risk for mortality. Those with slow walking speeds were 44% more likely to die over the next decade relative to those that walked a brisk pace. In older people, faster walking speed is correlated with better self-rated health.

How Fast is Fast?

What’s considered a brisk walking speed? In these studies, the fastest walkers strolled at a pace as fast as 13.5 minutes per mile. At this speed, you’re close to a jog. At the other end of the spectrum, the slowest walkers took 24 or more minutes to complete a mile. According to the Centers for Disease Control and Prevention, a brisk walking speed is a pace of 3 miles per hour or greater. At this speed, you should be able to complete a mile in 20 minutes.

How fast do most people walk? The average person’s preferred walking speed is around 3.1 miles per hour. It’s not surprising that faster walking speed is linked with better health and longevity. People who walk briskly are more likely to have better muscle and joint biomechanics, good balance skills and a healthy brain and nervous system. Walking briskly also requires good heart and lung function along with adequate energy and motivation. These are all markers for better physical and mental health.

According to the Journal of the American Medical Association, walking speed may predict longevity as well as other more commonly used markers like body weight, blood pressure, and smoking status. Based on research, they believe a walking speed of 2.2 miles per hour or greater is a marker for healthy aging.

It’s not hard to measure your own walking speed using a stopwatch. If you’re a speed demon, you’re probably in pretty good health overall. Most people slow down a bit with age but by doing regular workouts to improve your endurance, strength, balance, and flexibility you may still be going strong well into the later decades of life.

Research clearly shows exercise is beneficial at all stages of life and can slow down the aging process by preserving bone and muscle mass, maintaining muscle strength and functionality and by reducing the risk of a number of health problems including type 2 diabetes, heart disease, some forms of cancer and obesity. It can even improve your mood! Research shows exercise may be as effective as prescription medications for helping people with heart disease, stroke or metabolic syndrome.

If you’re not routinely a fast walker, pick up the speed when you’re out and about. You’ll burn more calories, increase insulin sensitivity and get cardiovascular benefits if you’re moving quickly enough. Be aware of how fast you’re walking and challenge yourself to move faster. Tackle the stairs instead of taking the elevator. It’s not just your scheduled workout that counts – it’s all the movement you do throughout the day. So, keep moving!