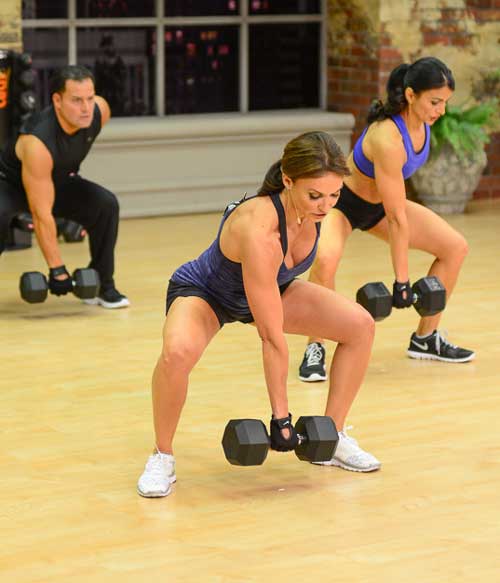 When you stop doing resistance training, you gradually lose some of the strength and muscle tissue you worked so hard to build. Here’s the good news. Your muscles have “memory,” the ability to quickly regain the strength you lost as a result of taking time off.  Muscle memory is a phenomenon that’s well-described and one that anyone who resistance trains can appreciate, especially when they take a break from training. The question is: How do muscles “remember?”

Most cells in your body have only one nucleus. An exception to this rule is muscle cells. Cells that make up your muscles are “multi-nucleated,” meaning they have more than one nucleus.  In fact, muscle cells have hundreds and sometimes thousands of nuclei. When you progressively overload your muscles through resistance training, muscle cells produce even more nuclei. The additional nuclei are donated by “satellite cells,” stem cells that fuse with muscle cells and transfer their nuclei. As a result, muscle cells have more nuclei to make new muscle proteins. This explains at the cellular level how muscles grow larger in response to training.

Now, let’s say you have to take a month or two off from training. Even though the muscle begins to shrink from lack of stimulation, the new nuclei in the muscle cells are retained. In fact, those extra nuclei stick around for 3 months or more after you stop training. This means when you get back to training, the nuclei are still there, ready to re-start the process of making new proteins to help you recover the muscle mass and strength you lost quickly.

Prior to the discovery that muscle nuclei formed in response to resistance training stick around for a while, researchers believed muscle memory was purely a brain phenomenon – your brain forges connections with your muscles that are preserved even after you stop training. It’s an example of “practice makes perfect” since the more you do the activity and reinforce those pathways, the easier it is to jump back in and do it smoothly without going through a relearning process.

When you do an activity, like sets of biceps curls, the proprioceptors in your muscles and tendons send information to your brain about the position of your muscles in 3-dimensional space. The brain uses this information to send input back to your muscles, telling them when to contract, at what angle and with what force. Over time, this interaction between brain and muscles builds communication pathways that become stronger each time you train.

If you stop training for a while and then return, the “roads” or pathways built between your brain and muscles are still there. As a result, you’re still capable of doing those movements even if you haven’t trained in a while. You don’t have to start over again from scratch. That’s good to know, isn’t it?

The same thing happens when you learn to ride a bike. It takes time to get the hang of it, but once you do, you can park your bike and still climb back on years later and take a spin. The more you perform an activity, the deeper the connections you form between brain and muscle and the easier it is to pick the same skill back up. You may be a little rusty, but you’re not starting all over again.

Pathways forged between brain and muscle also explain why we can do some things automatically. For example, when you sit down to type a letter or play a musical instrument you don’t have to consciously think about where each letter or note is on the keypad or instrument. This assumes you learned where the keys on the keypad are in the first place and aren’t typing with two fingers.

Not to undermine the brain-muscle connection, but the fact that muscle nuclei formed during training are retained changes the way we think of muscle memory. Structural changes have taken place in the muscle that isn’t lost when you stop training for a few months. Once you begin lifting again, those nuclei quickly begin synthesizing new muscle proteins so you can recoup your gains. You don’t have to rebuild new muscle nuclei to jumpstart muscle protein metabolism.

Muscle Memory Can Work Against You Too

Muscle memory is a good thing when you have to take a few months off from training due to illness or other factors, but it can also work against you. If you learn how to do an exercise, say lunges, using bad form, muscle memory makes it harder to alter your habits. Despite your efforts to change, your brain keeps telling your muscles to lunge the way they always have based on previously built pathways. You now have to relearn how to do it right. Once you’ve formed new pathways, doing it correctly becomes second nature. Take-home message? Focus on form when you learn a new exercise, not on how fast you can do it or how much weight you can use. Build the right pathways the first time through!

While taking 2 or 3 months off from training probably isn’t part of your plan, recouping your gains is easier and faster the second time around because you’ve already laid the groundwork.  Muscle memory is a real phenomenon that works in your favor as long as you learned how to train properly the first time. So, if you’re sidelined with an injury or illness, don’t sweat it. Your muscles are primed to rebuild once you begin training again.