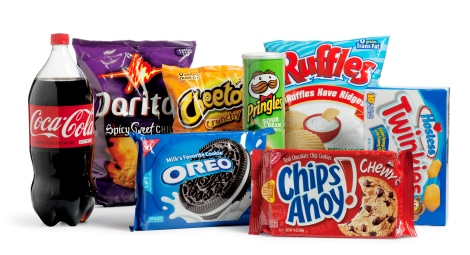 Fewer people have time to cook these days, which means more people are eating processed and packaged foods. The rise in obesity rates in America have closely paralleled the rise in consumption of processed foods. This isn’t surprising since packaged foods are usually higher in calories and contain more unhealthy forms of fat and sugar – but that may not be the only reason. A study shows you may burn fewer calories after you eat a processed meal than after you eat a similar meal consisting of whole foods.

Processed Foods and Their Effect on Fat-Burning

The Thermic Effect of Food

After eating a meal, your body expends energy to break down and process what you’ve eaten. The additional calories you burn after eating a meal is called the thermic effect of food, and it varies with the composition of the food you’ve eaten. For example, eating a food high in protein has more of a thermic effect than chowing down on one high in fat. That’s one reason why high-protein diets help with weight loss. The thermic effect of food isn’t insignificant. It accounts for up to 10% of your daily energy expenditure.

Why do processed foods have less of a thermic effect? In this study, the cheese sandwich made with whole grain bread was higher in fiber because of the grains in the bread. Fiber helps to reduce the rise in insulin levels that occurs after a meal. Research has linked higher levels of insulin after a meal with decreased thermogenesis and fat burning. In addition, insulin is a hormone linked with fat storage, so avoiding processed foods that spike insulin levels are a good strategy for weight control.

Now there’s another reason to eliminate processed foods from your diet. Plus, processed and packaged foods have less nutritional value than comparable whole foods. Add more fresh fruits and vegetables to your diet and enjoy a variety of lean protein sources like fish, turkey, tofu, and lentils that have a strong thermic effect – then enjoy the afterburn.

What Are Processed Foods and Are They All Bad?

Another Look at Fructose: Does It Cause You to Overeat?

One thought on “The Effect of Processed Foods on Fat Burning”