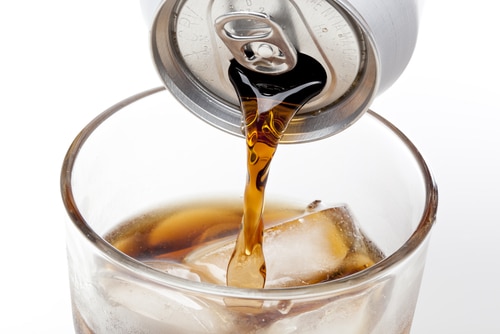 It’s a fact that Americans get a lot of extra calories added to their diets from consuming carbonated drinks that are loaded with sugar. So, theoretically, replacing calorie-laden sodas with non-caloric diet sodas would seem like a logical fix. But interestingly, some studies show that diet sodas have the exact opposite effect. Switching to diet soda has not proven to be a viable weight-loss strategy at all. In fact, diet sodas have been linked to above average weight gain.

In one 2009 study published in Diabetes Care, a daily diet soda habit was closely correlated to a greater risk of becoming obese, developing type 2 diabetes, and developing complications associated with metabolic syndrome.

In a more comprehensive study published in Obesity, researchers followed 3,000 subjects over a period of eight years. Half of the participants drank an average of three diet sodas per day. The other half did not drink any. The results were astounding. The diet soda group experienced a 47% increase in body mass index compared to study participants that abstained.

At the end of a 10-year study conducted by the University of Texas, researchers found that waist circumferences of participants who drank two or more diet drinks a day were significantly larger than control subjects who did not drink diet drinks.

Researchers do concede, however, that correlation does not necessarily indicate cause and effect. Thus, research is ongoing.

The question remains: How does diet soda that does not contain any calories increase the risk for weight-related diseases like diabetes and obesity?
There are no conclusive answers, but what scientists do know is that sugar itself is a high-calorie, non-nutritive substance that does not satisfy the brain. It is believed that sugar substitutes may have a similar effect. In fact, for reasons not fully understood, the evidence indicates that sugar substitutes actually lead to increased hunger and overeating.

Another possible explanation about why diet sodas don’t work is psychological. People who consume diet drinks subconsciously perceive that they are saving calories and, consequently, justify eating larger amounts of food.

Even though the reasons are not yet clearly defined, habitually consuming diet soda has been shown to be directly related to weight gain, the onset of type 2 diabetes, and the development of metabolic syndrome. If you are trying to lose weight, sugar in excess is not a good idea. And now it seems that sugar substitute in excess should be avoided, as well.

Sip Your Way to Better Health: Which of These 7 Beverages Are Healthy?

New Evidence That Artificial Sweeteners Are Linked with Weight Gain