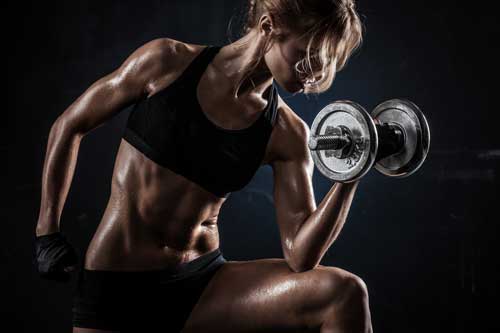 You might think your bones and muscles are two distinct entities but the two have a closer relationship than you think. According to new research, the bones that keep you upright and help you get around secrete a hormone that helps boost muscle performance. This hormone called osteocalcin is quickly becoming the focus of new research that could change the way we look at muscle aging. The hope is that osteocalcin, at some point, could help turn back the hands of time on aging muscles.

As you know, you lose muscle mass as well as strength as you age. This gradual loss begins after the age of 30. But if you’re inactive, you can lose as much as 3 and 5% of your muscle mass each decade. That’s why sarcopenia, loss of muscle tissue related to aging, is one of the biggest epidemics of our time.  With the loss of muscle tissue comes a reduction in strength and power. These changes to your muscles and their ability to generate force can impact every aspect of your physical functioning. At its most extreme, it could even make it hard to get up out of a chair. Why do the elderly fall so much? Yep, it’s at least partially due to the fact that they’re sarcopenic.

Wouldn’t it be nice if there were a way to “recharge” aging muscles, even for people who can’t or won’t work out? Researchers at Columbia University found that when they injected older mice with the protein osteocalcin, the muscle function of the mice was rejuvenated. The mice were able to run as far as younger mice – that’s pretty amazing if you think about it. They also discovered the amount of osteocalcin in the bloodstream went up with muscle contractions. In fact, the amount of osteocalcin released almost doubles during a bout of exercise.  That’s surprising since the link between exercise and osteocalcin is a novel one – and one more reason exercise is such good medicine.

Curious about what osteocalcin does? It is a protein produced by healthy bone. In fact, it’s the most abundant protein in the body, other than collagen. Osteocalcin is released by cells called osteoblasts, the cells within the matrix of bone, which helps build new bone mass. Higher levels of osteocalcin are linked with greater bone density. However, osteocalcin plays another role, one that’s also important for health. It signals your pancreas to produce insulin.

Osteocalcin also stimulates the release of adiponectin, a small protein made by fat cells that acts as a hormone. Adiponectin is beneficial because it improves insulin sensitivity and better insulin sensitivity leads to improved metabolic health. Previous research shows that osteocalcin plays a key role in blood glucose regulation. Mice that lack osteocalcin have poor insulin sensitivity and develop metabolic syndrome, a precursor to type 2 diabetes. Now it appears that osteocalcin may play yet another role – it could enhance exercise performance. Whether this takes place in humans, as well as mice, is unproven, but researchers believe that ultimately research will show it takes place in humans as well.

How might this process work? Osteocalcin helps regulate how muscles use glucose and fats to produce the energy they need to sustain exercise. Without the release of osteocalcin, muscle cells have less ability to use macronutrients, like glucose and fats, to make ATP. When ATP production is impaired, exercise tolerance decreases. When the researchers looked at mice bred so that their osteocalcin didn’t work properly, the mice were able to run between 20% and 30% shorter of a distance before exhaustion set in. In fact, research shows that you need the release of osteocalcin to get beneficial adaptations to exercise training.

Osteocalcin Goes Down with Age

When you’re young, you have a relatively high osteocalcin level, probably because you’re building bone. Osteocalcin slowly declines in women after the age of 30, but levels don’t fall in men until after the age of 50. Could this explain why we lose muscle function as we age and why people who work out age more slowly? At least in mice, exercise boosts osteocalcin production and the levels skyrocket in response to a workout.

The researchers also looked at exercise performance in older mice that had low osteocalcin levels. As expected, they couldn’t run very far before pooping out and having to stop. BUT, when the injected the old mice with osteocalcin, they ran with the same vigor and endurance as their younger counterparts. Osteocalcin seemed to rejuvenate and recharge the mice from an exercise endurance perspective. Could it do the same for aging humans?

As you might expect, researchers are excited by the prospect. It’s possible that osteocalcin could restore a portion of the endurance and exercise capacity we lose with age. As we grow older, aerobic capacity, or V02 max, declines and our bodies become less efficient at using oxygen. In fact, aerobic capacity decreases by about 10% per decade after the age of 30. This corresponds with a drop in maximum exercise heart rate.

The release of osteocalcin during exercise may also explain some of the metabolic benefits of exercise. An aerobic workout increases insulin sensitivity and lowers blood sugar, and osteocalcin does that too. The good news is exercise itself seems to boost osteocalcin production, so working out is the best defense against aging from a fitness standpoint. For those who don’t work out, scientists are hoping to one day harness the power of osteocalcin by giving it to older people in hopes of restoring their capacity to exercise.

As always, the best way to stay strong, functional, and maintain your endurance is to exercise – but you know that already, didn’t you?

Height Loss With Age: Can You Prevent It?

This Vitamin May Help You Retain Muscle Mass after Menopause

The Surprising Role that Fish Oil Plays in Muscle Hypertrophy

Can an Ingredient in Pomegranates Fight Muscle Aging?