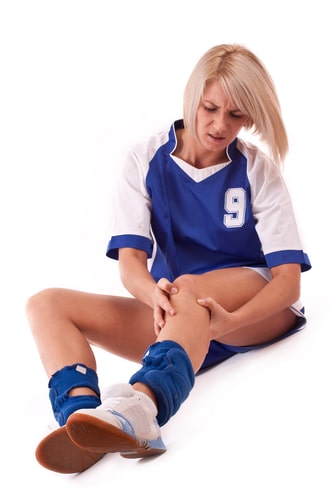 It’s one of the things athletes and active people dread the most – an injury that takes them off the field or keeps them from working out. Injuries take time to heal and that means time spent on the sidelines recuperating. Women who play sports are at higher risk for certain types of sports injuries, especially ACL injuries. If you’re female and you play sports or work out, it’s important to understand why you’re at higher risk and steps you can take to keep your knees healthy.

What Are ACL Injuries?

ACL refers to the anterior cruciate ligament, a band of fibrous connective tissue that connects the tibia, the lower leg bone to the femur, the thigh bone. The ACL is one of four major ligaments that wrap around the knee and help to keep it stable. The ACL’s job is to keep the tibia from sliding too far forward relative to the femur. Unfortunately, ACL injuries are common in athletes, especially women. In fact, women are five to ten times more likely to be sidelined by an ACL injury than men. Why are females at such high risk for this type of injury?

There are some anatomical differences that partially explain why women get more ACL injuries. Women have wider pelvises than men, which means their femur connects to their tibia at a greater angle. This makes the ACL more susceptible to tearing when the knee twists. In addition, the compartment through which the ACL runs and moves is narrower than it is in men, further increasing the risk of injury.

According to Dr. Timothy Hewett, Ph.D., a prime reason why women get more ACL injuries is a lack of neuromuscular control in the core region. When there’s poor control of the core, the core, and trunk shift over the knee more with physical activity. This places additional stress on the knee ligaments. Women also have greater quadriceps strength relative to hamstring strength. This creates an imbalance that increases their risk of injury. To make matters worse, when women jump they don’t bend their knees as much as men. This places added stress on knee ligaments. Some research also suggests that hormones play a role since ACL tears occur more commonly during certain times in a woman’s cycle.

What Can Women Do to Lower Their Risk for an ACL Injury?

According to Dr. Timothy Hewitt, women can reduce their risk by strengthening their core muscles and including exercises that improve balance. Working out on unstable surfaces, doing single-leg exercises and exercises that specifically target the core and back regions reduces the risk of knee ligament injuries.

It’s also important to strengthen the hamstring muscles to correct imbalances in length strength between the hamstring muscles and quadriceps. Plyometric exercises such as tuck jumps, side-by-side jumps help to improve neuromuscular control of the knee relative to the foot. Balance exercises also lower the risk of injury to the knee ligament. Having good balance helps to maintain body alignment with shifting motions.

Exercises that address these issues that make women more prone to ACL injuries should be a part of every workout program. Once an ACL injury has occurred, the risk for re-injury is higher. An ACL injury also accelerates the development of osteoarthritis in the knee. Prevention should be a priority for anyone involved in sports or works out.

Getting Back into the Swing of Things After an Injury

Ways To Stay Injury Free When You Fitness Train

Factors That Increase Your Risk for Tendon Injury

Are You a Female? Then You Need to Work on Hamstring Strength

Are Women at Higher Risk for Knee Problems?