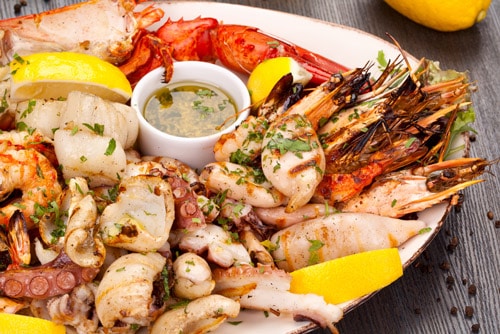 There’s a movement toward eating less red meat, especially processed meat. Although poultry is a popular alternative, seafood is touted for its health benefits as well. Fish is high in protein and low in calories. Plus, some types of fish, fatty fish found in deep waters, are high in omega-3 fatty acids. Omega-3s are important for heart and brain health and appear to have anti-inflammatory activity as well. Most of us don’t get enough of these fatty acids and fatty fish is the best source.

Although you can get omega-3s from plant-based foods, like chia seeds, flaxseed, and walnuts, these omega-3s are different in structure. They’re called short-chain omega-3s. This is in contrast to long-chain omega-3s in fatty fish. Unfortunately, your body has to convert the short-chain form to long chains to get the full benefits. Unfortunately, it’s not very efficient at doing so. Less than 5% of the plant-based omega-3s you take in successfully makes this conversion.

Calling the Health Benefits of Fish into Question?

It’s easy to see why people think fish is healthy – and it is when it comes from clean waters. Unfortunately, the ecosystem in which fish live these days is increasingly polluted with toxins, including heavy metals, like mercury, and chemicals like dioxins and PCBs. Although PCBs were banned in the 1970s due to toxicity concerns, it’s still in the environment and the waterways. These toxins build up in fish and when you eat them, you, too, are exposed. Dioxins and PCBs are associated with a variety of health issues, including hormone and immune system disruption as well as reproductive issues. It’s also likely that they cause cancer.

Because of these issues, women who are pregnant are encouraged to limit fish consumption, despite the fact that the omega-3s are important for a developing baby’s brain. The risk of exposure to these toxins for mother and particularly a baby is too high.

Not all fish grow up in the ocean. Most of the fish you buy at the grocery store is farmed, meaning the fish were raised commercially in tanks. That might sound like a better idea when you consider the threat of water pollution but they have far lower levels of omega-3s relative to wild fish. Fish that grow up in the wild get omega-3s from aquatic plants whereas fish raised on farms eat soy and corn that are almost devoid of omega-3s. Therefore, they don’t have the desirable fats that wild fish do.

Plus, farmed fish are also exposed to toxins like PCBs and dioxins as well. In fact, farmed fish harbor more of these industrial pollutants than wild-caught fish from the ocean. According to NutritionFacts.org, farmed fish have higher levels of dioxins, DDT, and over 10 times more PCBs relative to wild fish. We’re already exposed to toxins in the air we breathe and pesticides from the other food we eat. Does eating fish just add to the toxic burden?

Is Radiation an Issue Too?

Then there’s the potential for radiation. Back in 2011, when the nuclear meltdown of the Fukushima power plant took place in Japan, radioactive cesium entered the ocean as well, although the effects diminish the further from the Fukushima site you are. Fish that live near the bottom of the ocean floor are most impacted by radioactive cesium since that’s where the cesium ends up based on gravity. Even freshwater fish are impacted. In fact, the way freshwater fish regulate their fluid balance causes them to accumulate even higher levels of cesium than fish that live in the ocean.

Back in 2015, researchers found radioactive elements had reached the Pacific coast of the United States. That’s concerning since it isn’t going away anytime soon. The half-life of cesium-137, the form of radioactive cesium detected, is around 30 years. That means only half of it will have decayed after 3 decades. Even more disturbing is the fact that the level of cesium-137 in fish isn’t declining. This suggests that fish are still being exposed through radiation leaks. Although most experts don’t believe, the small quantities you are exposed to by eating fish from the Pacific Ocean pose a threat, it’s still a concern, especially when you take into account the other unhealthy pollutants in fish.

Should You Eat Fish?

All in all, you have to weigh the benefits against the risks. You don’t really know what you’re getting when you buy fish. Research shows one in three fish you buy at the supermarket is mislabeled. It’s common to label less expensive fish as more expensive ones. For example, red snapper might be labeled as tilapia. It’s likely that farm-raised fish is also falsely labeled as wild-caught as well. There’s not a lot of transparency when it comes to seafood. It’s particularly concerning when a fish more likely to be high in mercury is labeled as one that’s safer. Larger fish are the most likely to accumulate pollutants and heavy metals since they’re higher in the food chain. Small fish, like sardines, tend to be the safest options.

Although fatty fish is one of the best sources of long-chain omega-3s, taking a fish oil supplement might be a better approach. Most of the more expensive fish oil supplements undergo molecular distillation to remove toxins. Plus, mercury isn’t an issue since heavy metals bind to proteins not the oil of the fish. Mercury is a toxin that affects the nervous system and is particularly dangerous to developing infants. One concern about fish oil supplements is their freshness. Omega-3 fatty acids are unstable and can oxidize and become rancid when exposed to heat or light. Always buy from a reputable manufacturer and store them in a cool, dark place. Look for ones that are enteric coated to reduce digestive upset.

If you choose to eat fish, choose wild-caught, fatty fish, like wild-caught salmon, and avoid eating it more often than twice a week. Buy your fish from a reputable source as well.

Fish is high in protein, low in calories, and some types are rich in healthy, long-chain omega-3s. Yet, concerns about heavy metals and pollutants are justified.

Time Magazine. “The Lingering Effects of Fukushima on Fish”

The Daily Beast. “How Radioactive Is the Pacific, Really?”

NPR The Salt. “One In Three Fish Sold At Restaurants And Grocery Stores Is Mislabeled”

4 Ways Omega-3s Can Benefit Your Workouts

Do Omega-3 Fatty Acids Speed Up Muscle Recovery After Exercise?