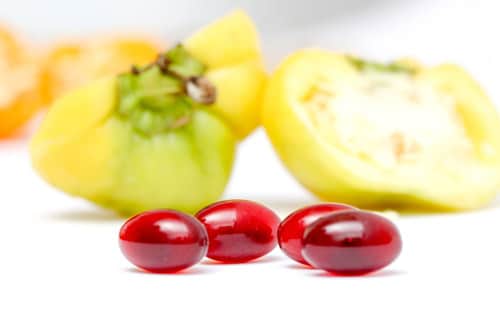 Each cell in your body is surrounded by a cell membrane and that membrane is composed of fat. The type of fat contained within the membrane of a cell impacts how the cell functions and even how it responds to signals from hormones. For example, less fluid cell membranes are linked with insulin resistance as insulin can’t communicate with the cell as well when the cell membrane is stiff.

One group of polyunsaturated fats, called omega-3s, are especially important for membrane fluid and appear to have anti-inflammatory activity. That’s why so many people are taking fish oil supplements these days. However, in recent years, a new player, krill oil, has come on the scene, as an alternative to fish oil. Is krill oil better than fish oil?

What is Krill Oil?

Both fish oil and krill oil come from the sea – fish oil from fatty fish, like salmon, while krill oil is harvested from tiny crustaceans that resemble shrimp. These tiny seaborne creatures live at the bottom of the ocean and feast on phytoplankton. Both fish oil and krill oil contain long-chain omega-3 fatty acids, including DHA and EPA. These are the omega-3s most closely linked with health and healthy cell membranes.

Is one better for your health? Both krill and fish oil contain long-chain omega-3s, but there are differences. For one, when you take a dose of krill oil, you get fewer long-chain omega-3s than when you take a similar dose of fish oil. However, an advantage that krill oil has over fish oil is better absorption. That’s because krill oil contains phospholipids, the same type of fat that’s in cell membranes. The inclusion of this fat theoretically makes it easier for it to incorporate into cell membranes and easier to absorb from the digestive tract. It’s also in a phosphorylated form (addition of phosphate), which also enhances the ability of your body to use it. Despite these differences, when krill oil and fish oil are compared in studies, not all show that krill oil has a clear absorption advantage.

Another potential benefit of krill oil over fish oil is krill oil contains a carotenoid called astaxanthin. Based on preliminary research, astaxanthin has antioxidant activity within the body but it also may help keep the oil itself from becoming rancid. Polyunsaturated oils are unstable and can form free radicals over time. Astaxanthin potentially gives krill oil a longer shelf life than fish oil.

One concern about eating fatty fish or taking fish oil is the possibility of toxin exposure. Fish, especially large fish, accumulate toxins like heavy metals, dioxins, and PCBs. One toxin of concern is mercury, a heavy metal, that acts as a poison to the brain and nervous tissue. Children are at especially high risk for complications of mercury exposure. Since krill are at the bottom of the food chain, it doesn’t accumulate toxins to the same degree as larger fish. However, even with fish oil supplements, this isn’t a huge issue since many fish oil supplements undergo molecular distillation to remove any toxins that are present.

One downside to krill oil is its cost. It’s typically costlier to bring to market and the price you pay for a bottle reflects that. According to ConsumerLab.com, you would pay around 50 cents for a dose of DHA and EPA and only 5 to 10 cents for the same dose had you purchased a fish oil supplement. Another issue is the side effects. Both fish oil and krill oil are linked with side effects, including flatulence and nausea, but they’re more common with krill oil.

Like fish oil, krill oil interacts with blood-thinning medications and increases the risk of bleeding. It can also lower blood pressure and blood sugar, although this isn’t necessarily a bad thing unless you’re already too low. Like fish oil, it can also interact with a variety of medications.

Supplements vs. Fish for Omega-3s

Of course, you don’t have to take a supplement to get the benefits of long-chain omega-3s. Fatty fish is an excellent source, however, there are growing concerns about toxins that fish take up from the environment and store in their bodies. When you eat the fish, you absorb these toxins. Certain fish carry more toxins than others. Large fish, high in the food chain, carry the highest risk. Some fish to avoid, except on occasion include:

For a full list of fish and their mercury concentration as well as guidelines on how much is safe to eat, check, Google the EDF Seafood Selector offered by the Environmental Defense Fund. It’s a handy reference when you’re shopping for fish.

The question is whether you can eat fish often enough to get enough long-chain omega-3s and if you should. The quantity of toxins in fish seems to be increasing as the environment becomes more polluted. Supplements offer an advantage because most are distilled to remove heavy metals and toxins.

Why Not Plant-Based Omega-3s?

You’ve probably heard that certain plant-based foods are high in omega-3s, including walnuts, flaxseed, sesame seeds, and chia seeds. However, these omega-3s have a drawback – they’re in a short-chain form that doesn’t necessarily have the same benefits as long-chain omega-3s, like DHA and EPA. Your body can convert only a small portion, less than 5%, from short-chain to long-chain. That’s why it’s best to get omega-3s in long-chain form, from fish oil, fish, or krill oil.

You can get enough omega-3s by eating fatty fish, like wild-caught salmon, twice a week. If you prefer a supplement, krill oil and omega-3s are two alternatives. All in all, there’s not compelling evidence that krill oil is superior to fish oil. The addition of astaxanthin, with its antioxidant activity, is a perk, but if you eat a diet rich in fruits and vegetables, you’ll get a diversity of antioxidants anyway.