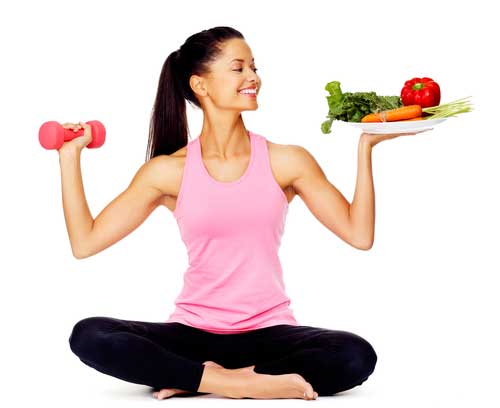 The speedier your metabolism, the faster your body burns the food you eat and stored fat, to produce energy. A faster metabolic rate is an advantage when you’re trying to lose weight. Unfortunately, metabolism slows with age. Most people can’t eat the same quantity of food in their 40s and 50s as they did in their 20s without some of it ending up on their waistline or thighs.

Since there’s no dial you can turn to crank up your metabolism, you have to depend on lifestyle changes to keep your metabolic fires burning – but is that really possible?  How much can you alter your metabolism through diet and exercise?

What Determines Your Metabolic Rate?

Resting metabolic rate is the most important of these three components and accounts for the majority of the calories you burn each day, about 60%. Genetics have an impact on your resting metabolic rate. You may have seen people who overeat, eat the wrong things, don’t exercise and still stay thin. These lucky individuals have their genes to thank.

Problem is you don’t have a lot of control over the genes you were handed, although the field of epigenetics says otherwise. You also don’t have control over your age or the size of your bones and organs. What you do have some control over is your diet and exercise habits. Can you “rewire”your metabolism through lifestyle choices?

Want to boost your resting metabolic rate? Grab a pair of weights. In one study, researchers asked a group of male and female participants, many of them older, to participate a 26-week resistance training program. During the program, they trained using a resistance equal to 65% to 80% of their one-rep max and increased the resistance over time to create progressive overload. The results were encouraging. At the end of the 26-week program, the participants, both male, and female had a 7% higher resting metabolic rate.

How does diet affect your resting metabolic rate? You’re probably already aware that crash diets stall your metabolism. Overzealous calorie restriction can slow your resting metabolic rate by up to 20%. Part of this reduction is your body’s natural response to not getting enough fuel – everything slows down and you go into fuel conservation mode. If you continue to consume too few calories, you’ll begin to break down muscle mass. Loss of muscle mass further stalls your resting energy expenditure. Weight loss diets really can slow your metabolism, especially if you aren’t resistance training.

Other Components of Total Energy Expenditure

Resting metabolic rate is the biggest component of your metabolism but not the only one. Thermic effect of exercise makes up about 30% of the calories you burn every day. This 30% includes structured exercise, daily workouts and all the other movements you do throughout the day. To increase this component of energy expenditure, move around more. Getting up out of your chair more, moving around and stretching and even fidgeting counts. In fact, a Mayo Clinic study showed some fidgeters burn up to 350 calories a day doing things that nervous fidgeters routinely do like shaking their legs, squirming, twisting their hair around their finger and tapping their hands on the table. Fidgeters just might be on to something!

What About the Thermic Effect of Food on Your Metabolism

The thermic effect of food is the energy your body burns to break down, digest, absorb and metabolize the food you eat. For most people, this component of metabolism makes up 10% of their total daily energy expenditure. You may have heard eating small meals more frequently will boost your metabolism due to the thermic effect of food. Unfortunately, the latest research doesn’t support this idea. The thermal effect of food seems to depend more on the total number of calories you consume rather than how often or when you snack.

The composition of what you eat has a modest effect on this component of your metabolism. It takes more energy to break down and process protein than it does carbohydrates or fat. So, you’ll burn a few more calories when you eat a meal higher in protein, although the major effect protein has on weight loss probably comes from its effect on satiety.

All in all, the best way to make over your metabolism is to increase lean body mass. More muscle tissue will give your resting metabolism a modest boost. To keep your metabolism from slowing, avoid very-low-calorie diets and include periods of higher calorie intake to stimulate leptin production. Leptin not only keeps your appetite in check it boosts your metabolism. The take-home message? You can modify your metabolism to some degree through diet and exercise. Your best tool for a healthy metabolism is a pair of weights.

Washington Post. “Fidgeting Helps Separate the Lean From the Obese”

One thought on “How Much Does Diet and Exercise Affect Your Metabolism?”