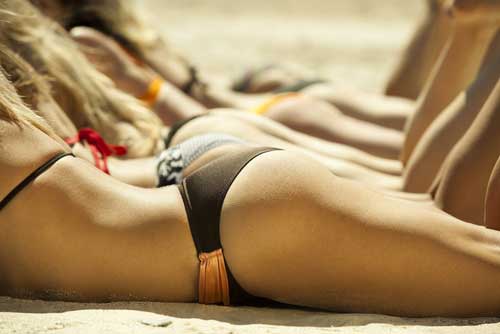 Chances are you have a few moles on your body and you probably don’t think about them much often – but maybe you should. It’s important to do regular skin checks to look for skin changes and new growths. The incidence of a serious form of skin cancer called malignant melanoma is on the rise. In fact, melanoma is the most common skin cancer in women between the ages of 25 and 29. It’s a disease that has a good chance of cure when picked up early.

Malignant melanoma is a form of skin cancer that originates from cells called melanocytes. Melanocytes are cells in your skin that produce melanin, the pigment that gives your skin and hair its color. Sometimes malignant melanoma arises from a pre-existing mole. In other cases, it pops up as a new skin growth. Malignant melanoma cells grow in a rapid, disorganized manner and invade the skin’s deeper layers unlike the most common cause of skin cancer, basal cell carcinoma, which typically doesn’t grow downward.

Because malignant melanoma grows into the deeper layers of the skin, it can spread to other parts of the body once it hits your lymphatic system. This makes it a potentially fatal form of skin cancer, although it can be cured if caught early. Unfortunately, only about half of people regularly examine their skin for new skin growths or changes to existing moles. This means a lot of melanomas are caught at a later stage when there’s less hope for a cure.

Who’s Most at Risk for Malignant Melanoma?

If you have a family member who’s had a melanoma, you’re at higher risk yourself. On the other hand, you don’t need a family history to get this form of skin cancer. People who have fair skin or freckles and tan poorly are at greater risk for malignant melanoma than dark-skinned people. If you have blonde or red hair, your risk is also higher. Having lots of moles on your body, especially moles with atypical features, puts you at greater risk as well.

Other risk factors? Sun exposure is the most important modifiable risk factor for malignant melanoma. If you spent time baking in the sun, frequented tanning beds or had a blistering sunburn during childhood, your melanin-producing cells “stored up” that damage. At some point, this damage may show up as a malignant melanoma. On the other hand, some of the most common skin areas where melanomas show up like the back aren’t necessarily ones that got lots of sun exposure. There are other poorly understood factors that increase the risk for this serious form of skin cancer.

Everyone should do regular skin checks but if you are in one of these high-risk categories you need to be especially vigilant about checking your skin for changes.

How to Check Your Skin

The way many experts recommend checking for melanoma is with the ABCD method. If you have a mole with any of the following characteristics, have it checked out right away by a dermatologist. These are called the “ABCs” of malignant melanoma:

A for asymmetry – This is when the two sides of a mole don’t look alike. One side is larger or smaller than the other. Most common moles are relatively symmetrical. When one isn’t, especially if it’s changing, it should raise a red flag.

B for borders – Most common moles have smooth, regular borders. If you have a mole with jagged or irregular borders, have it checked immediately.

C for color – Common moles are usually uniform in color. If you have a mole that looks irregular in color or is more than one color, be suspicious.

D for diameter – Be suspicious of moles that are larger than the size of a pencil eraser.

E for evolving – More that are changing in shape, size or color should be evaluated right away.

If you have a mole that’s growing in size, changing in color, swelling, itching or bleeding, have a doctor or dermatologist look at it as soon as possible. Any new skin growth that has any of these characteristics needs to be checked out.

You might think you only need to examine areas of your skin regularly exposed to the sun. Unlike other forms of skin cancer, melanomas commonly arise in areas that don’t get lots of sun exposure like the back. In fact, the most common location for melanoma is the back in men. In women, the legs are a common site for melanomas. Unfortunately, it may be hard to examine certain areas like your back unless you have a partner that can do it. If necessary, use a set of magnifying mirrors to examine your back every month, especially if you have moles in that area. Make sure they’re not changing and there are no other skin changes. When you visit your doctor, make sure they do a thorough skin exam as well.

Sun exposure plays a role in melanoma, although it’s not the only factor. The best defense you have against melanoma is to wear a broad-spectrum sunscreen every time you go outside. Broad-spectrum sunscreens block both UVA and UVB rays both of which are damaging. Look for one made with zinc oxide or titanium oxide.

Malignant melanoma is a serious and potentially fatal form of skin cancer. It doesn’t stay on the surface of your skin – it moves more deeply and eventually enters the bloodstream where it goes to other organs. The lifetime risk of getting melanoma isn’t low. You have between a 1 in 75 and 1 in 50 chance of getting one at some point in your life. The risk is higher if you have a family history or any of the other risk factors listed.  What’s the best way to prevent it or catch it early? Do regular skin checks and wear sunscreen on sun-exposed areas every time you go outside.

5 Self-Exams All Women Should Do to Protect Their Health