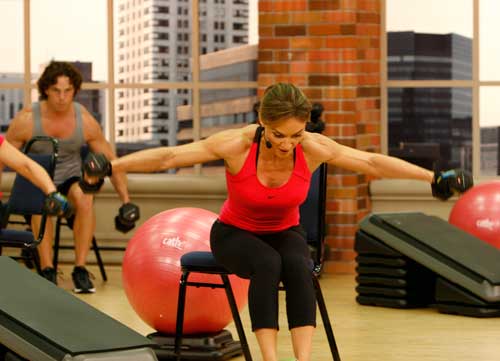 Ask the average person, what kind of exercise improves longevity and they’ll probably say aerobic exercise, like running or cycling. Indeed, aerobic exercise is strongly linked with a lower risk of cardiovascular disease, the most common cause of death in Western countries. In addition, research shows physical activity reduces all-cause mortality by 35%. Pretty impressive, huh? That’s why movement matters.

We also know that strength training reduces one of the most common downsides of aging, loss of strength and muscle tissue, a pitfall that ultimately leads to frailty. Most people don’t think of strength training as prolonging life – but research suggests that it does. In fact, a new study carried out at Penn State College of Medicine showed older adults who strength train have a lower risk of dying early.

What the Study Showed about Strength, Longevity, and Mortality

In the study, researchers looked at data from a large study (30,000 people age 65 and older) called the National Health Interview Survey (NHIS). Researchers followed the participants for 15 years to determine what their health outcomes would be. What’s discouraging is only 9% of the adults in this study strength trained at least twice a week. The good news? Those who DID enjoyed a surprising benefit – a lower risk of dying over the course of the study.

In fact, in this study, adults age 65 and older who strength trained had a 46% lower risk of dying relative to their more sedentary peers. Even after the researchers controlled for healthy lifestyle habits and diet, mortality was lower. When they separated out the effects of aerobic exercise, strength training still had a positive impact on mortality.

There’s more good news. This current research isn’t the only study to show strength training lowers mortality. A study published in the British Medical Journal that looked at strength training in men showed a similar association. This review showed muscle strength in men was inversely related to mortality. In other words, stronger guys were less likely to die. When the researchers controlled for cardiorespiratory fitness and aerobic capacity, the association persisted, although it was attenuated somewhat. Their conclusion:

“Muscular strength seems to add to the protective effect of cardiorespiratory fitness against the risk of death in men.”

If you’re doing hours of cardio for heart health and rarely picking up a weight, it might be time to change. Your time might be better spent dividing your time between cardio and strength training. Too many people make strength training a secondary focus when they work out. Keep in mind that this doesn’t necessarily mean that strength training itself increases longevity. It could be that guys and gals who are inherently stronger are less likely to die early – but it’s an interesting observation.

Does Strength Training Protect against Cancer?

Another interesting observation – a 2009 study showed a link between muscle strength and lower death rates due to cancer in men. Again, you have to consider other factors that could account for this association, one of which is body fat percentage. A number of studies show cancer rates and cancer mortality are higher in people who are obese or have a high body fat percentage. Could this explain the association? Maybe not, since the association persisted even after they factored in body fat.

Unfortunately, most adults, particularly older adults, as this study showed, don’t strength train. If they do any exercise at all, they walked at a moderate pace. Walking is certainly better than being sedentary but, as you know, it does little to build strength. It’s no secret that you lose muscle and strength at a more rapid pace after the age of 50. For women, muscle loss accelerates after menopause, but the process actually begins after the age of 30.

After menopause is when the dreaded phenomenon of sarcopenia, loss of muscle tissue and increase in body fat sets in. Just as problematic is the fact that the fat you gain after menopause is often visceral fat, the kind that’s stored deep in your pelvic cavity and shows up as an increase in waist size. From a health perspective, this is the most dangerous form since it’s linked with a higher risk of heart disease and type 2 diabetes. Visceral fat is a marker for poor metabolic health and a higher risk of health problems.

How Does Strength Training Reduce Mortality and Increase Longevity?

One possible way strength training may protect against an early death is by improving insulin sensitivity. As you age, cells respond less to the insulin your pancreas produces. We constantly hear about the growing problem of insulin resistance and metabolic syndrome – that’s because around 30% of the population has some degree of insulin resistance.

Another way strength training helps protect against an early death is by helping you stay functional and less prone to injury as you age. When you have strong muscles, you don’t suffer the effects of frailty as you age and you’re less prone towards falls. Don’t forget, strength training also preserves the health of your bones, as long as you’re lifting at 80% of your one-rep max or greater. Muscles pull on bones and stimulate new bone formation. High-impact aerobic exercise and high-intensity strength training are the two types of exercise that reduce bone loss.