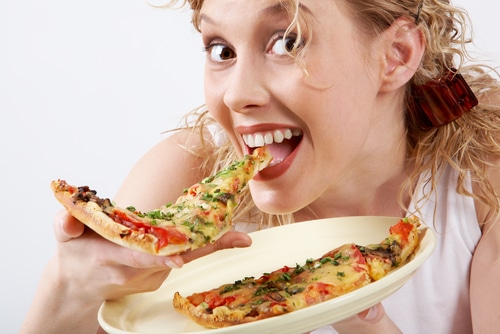 You’re starving and can hardly wait to bite into that turkey sandwich you made for lunch. Hunger is a powerful drive, and one of the “behind the scene” players that control hunger and appetite is a hormone called leptin. Leptin also plays a role in how rapidly you burn fat. How does it exert its powerful effects on your appetite and your waistline?

Leptin is a hormone made by fat tissue. Its main purpose is to regulate appetite, but it also has an effect on metabolism. Fat cells release leptin, and the amount released into the bloodstream is proportional to body fat. So, a person with greater amounts of body fat will have higher circulating levels of leptin.

When leptin enters the bloodstream, it finds its way to leptin receptors located in the hypothalamus of the brain. Once leptin binds with these receptors, it blocks the release of a protein called neuropeptide Y that stimulates appetite. This reduces hunger and the desire to eat.

But that’s not all. Blocking neuropeptide Y also has a favorable effect on metabolism, so you burn fat at a higher rate when you have high circulating levels of leptin. It’s your body’s way of reducing the amount of food you eat and increasing fat burning when there are plenty of fat stores around.

Some people who are obese have a condition called leptin resistance. This happens in people who have such high levels of leptin in their bloodstream that leptin receptors in the brain stop responding to it. This is similar to what happens with insulin resistance. The receptors become desensitized. When brain leptin receptors no longer respond to leptin, neuropeptide Y has free reign. This causes a slow-down in metabolism and increased hunger. People with this condition are in a vicious cycle where they can’t turn off their appetite because their brain no longer responds to leptin released by their fat cells.

Leptin Plays a Role in Weight Regain after Weight Loss Too

Leptin also partially explains why so many people regain weight after they lose it. When body fat levels drop after weight loss, leptin levels drop right along with it. This causes an increase in appetite and a slow-down in metabolism. Over time, you eat more and burn less, and those unwanted pounds return. According to a study published in the Journal of Clinical Investigation, giving people who have lost weight leptin or a drug that simulates the effects of leptin might prevent weight regain after weight loss. Of course, there are other hormones and factors involved, but leptin plays an important role in weight control.

Not surprisingly, fasting lowers leptin levels. So does sleep deprivation. That’s one reason why people who sleep less than 7 hours a night are more likely to overeat and gain weight over time. According to a study published in the Journal of the American College of Nutrition, zinc raises leptin levels in people who are deficient.

Based on this, the best way to keep your leptin levels from falling too low when you’re losing weight is to avoid restricting calories too much, and don’t skimp on sleep. Also, make sure you’re getting enough zinc in your diet.

5 Appetite Hormones That Control How Much You Eat

HiiT Training: What Effect Does It Have on Appetite?