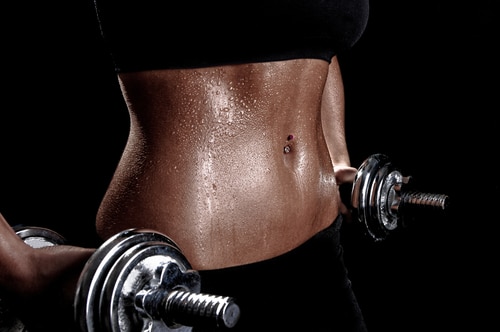 If you look around the gym, you’ll probably see at least a few red-faced people with sweat pouring off of their face and onto the elliptical machine as they rhythmically pump their feet back and forth. You’ll see still others racing along on a treadmill or other cardio machine with only a glimmer of sweat on their forehead. Is the heavy sweater on the elliptical machine getting a better workout just because he’s sweating more?

You’ve heard people say they “barely broke a sweat” when describing an easy workout. Most people equate sweating with hard work and don’t feel they’ve accomplished enough unless their clothing is drenched when they finish. Does “no sweat, no gain” apply to exercise?

Working Up a Sweat

Sweating is your body’s way of eliminating excess heat. As core body temperature rises during a workout, sensors in the brain sense the increase in body temperature. The brain sends signals to the peripheral nervous system to shunt more blood to the surface of the skin so the excess heat can be released through sweating. That’s when you start reaching for the face towel.

The increase in core body temperature that stimulates sweating comes from the contraction of muscles as they exercise, and the rise is directly proportional to exercise intensity. Not surprisingly, sprinting on a treadmill will give you a sweaty face faster than taking a leisurely walk around the track. In this sense, sweating is a sign that you’re working hard, but it’s not the complete story.

There are other factors that determine how much a person sweats that are unrelated to the intensity of a workout. Genetic factors play a role in sweating, and age and gender are factors too.

Research shows that older people sweat less during exercise, and women generally have lower sweat rates than men when they work out at the same relative intensity. Lower sweat rates contribute to heat intolerance during a workout, which is why women and older people may feel more uncomfortable when they exercise in a hot environment.

Humidity level also plays a role in how much you sweat during a workout. When the humidity level is high, sweat on the surface of the skin can’t evaporate. This means you may be covered in a layer of sweat even if you aren’t working out that hard. It also means your body can’t cool itself as well, which makes working out in high humidity pretty uncomfortable. When you work out in a cooler, less humid environment, you won’t sweat as much at a given exercise intensity, because the sweat will evaporate so fast.

How much you sweat during a workout varies with the environment you’re exercising in, Age, sex, fitness level as well as the intensity of your workout are factors too. If you don’t work up a soaking sweat during exercise, it doesn’t necessarily mean you didn’t work hard enough. So don’t use sweating as an indicator of how hard you’re working out.

5 Surprising Myths and Facts about Sweating

Sweating Profusely During Exercise: Does It Mean You’re Out of Shape?

Can You Lose Weight by Sweating?