If You Drink More Water, Will You Consume Fewer Calories?

If You Drink More Water, Will You Consume Fewer Calories? 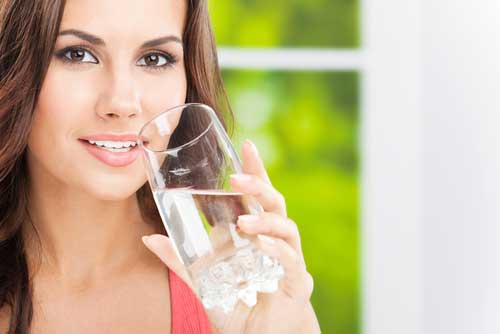 Drink more water – how many times have you heard that advice? Water truly is the universal liquid and one that bathes every cell in your body. Despite its importance, we sometimes forget to rehydrate, especially when we’re busy.

Think about it. When is the last time you drank a large cup of water, not tea, coffee, or a flavored beverage, but pure water? Not only do you need water for every aspect of cellular function, but some studies also show that drinking water may help with weight loss and to consume fewer calories. Does science support this idea?

Do You Consume Fewer Calories When You Drink Water – Eat Less?

According to a new study, if you drink more water, you’ll eat less. In this study, researchers evaluated more than 18,000 healthy adults as part of a larger study called the National Health and Nutrition Examination Survey (NHANES). This study ran for almost seven years. During this time, researchers closely monitored how much plain water the participants drank relative to other beverages.

What they found was those who drank more water enjoyed some surprising benefits. For each 1% increase in the amount of plain water they drank, their sugar intake dropped by as much as 18 grams and their calorie consumption decreased by 68 to 205 calories on a daily basis. Over time, this could lead to significant weight loss. The participants got some other health bonuses as well. They consumed less sodium when they drank more water.

Yet another study found a similar 25 to 30% increase in resting energy expenditure after participants drank two cups of water.  According to these studies, drinking water gives your metabolism a subtle, but measurable, boost. Research also suggests that drinking ice cold water is modestly more beneficial than drinking lukewarm water since your body has to use energy to heat the water to room temperature when it reaches your digestive tract. So, if you’re trying to get leaner, add ice to your water.

Of course, the increase in resting metabolic rate you get when you drink a glass or two of cold water isn’t huge. How does it translate into real-life weight loss? In one study, overweight women increased the amount of water they drank by a liter a day without making any other dietary changes or changes to their exercise habits. Over the course of a year, they lost an extra 4.4 pounds.

Based on these studies, there are two ways of drinking more water is a weight loss booster. One, you theoretically consume fewer calories when you drink more water and it modestly boosts your resting metabolic rate for up to 40 minutes after you drink it. Extra points if you replace sugary beverages with no-calorie water. If you’re a soda guzzler, just doing that is enough to cause significant weight loss.

How Much Water Should You Drink?

You’ve heard the old eight glass a day rule. While there’s nothing wrong with drinking eight glasses of water daily, there’s nothing magical about it. This notion is now regarded by some health experts as another medical myth that needs to be retired. Drinking more water won’t help you live longer or lower your risk for disease, although it reduces your risk for kidney stones, and it won’t slow down the aging process. On the other hand, you’ll feel better if you aren’t dehydrated. Even mild dehydration can make you feel sluggish and even trigger a headache.

If you exercise, especially in a hot or humid environment, adjust your fluid intake accordingly. Under these circumstances, you may need more than 8 glasses of water a day or even consume an electrolyte-rich beverage if you exercise for long periods of time. Other times you need more fluid intake is when you’re pregnant, breastfeeding, or experiencing fluid loss from vomiting or diarrhea.

If you’re trying to lose weight, drinking water prior to eating a meal may help you cut your calorie consumption. Sometimes people confuse thirst with hunger. So, satisfying your thirst first may help you consume fewer calories when you start eating a meal.

Drinking more water isn’t a magical formula for weight loss. It won’t replace a healthy diet and physical activity. Still, there’s evidence that drinking pure water has modest weight control benefits, especially if it takes the place of beverages that have calories. So, grab a stainless steel bottle, fill it up with ice water, and carry it with you – and be sure to sip, sip, sip.

New York Times. “No, You Do Not Have to Drink 8 Glasses of Water a Day”

Do You Really Need to Drink 8 Glasses of Water Daily?