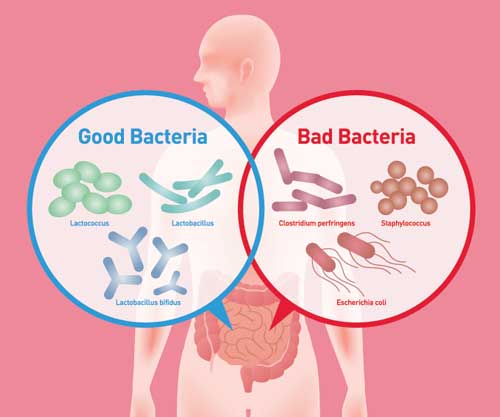 Your intestinal tract is teaming with colonies of bacteria, as many as 100 trillion of them. The particular population of gut bacteria that live in your gut is known as your gut microbiome. Each of us has a unique bacterial “signature” that defines us, yet one that is also influenced by diet and lifestyle. No two people have exactly the same composition of gut bacteria.  While you might not think much about this motley array of microscopic organisms as you go about your daily life, preliminary research suggests they influence health in a variety of ways.

How Gut Bacteria Impact Your Health

First, these bacteria play a key role in nutrient absorption, intestinal health, and how well your immune system fights off pathogens. Too weak of an immune response and you become susceptible to infection while too vigorous of a response could trigger inflammation that damages tissues. In terms of immune activity, there’s a “sweet spot” that’s conducive to health.

More recently, scientists have discovered that gut bugs influence body weight. For example, men and women who are obese have a gut microbiome that differs from those who are leaner. Gut bacteria may affect body weight in a number of ways. Based on preliminary studies, they can alter nutrient absorption. Some studies also show they can make you hungry by influencing appetite hormones or trigger an inflammatory response. Inflammation is linked with metabolic problems like insulin resistance, which make it easier to gain weight. Yet, there’s another way gut bacteria could make you more susceptible to weight gain – by affecting your metabolism.

According to a study published in Science Daily, gut bacteria may influence how many calories you burn when you’re just resting or sleeping, in other words, your resting metabolism How did researchers come to this conclusion?

As most doctors and patients will tell you, medications can lead to weight gain. One medication that often causes problematic weight gain is called risperidone. Some people on this drug gain the equivalent of 10% or more of their body weight. Using mice as a model, researchers confirmed that risperidone caused significant weight gain in mice as well. They also noted that the mice who took risperidone developed changes to their gut microbiome, the type of bacteria in their gut. Along with this change in bacteria, the mice experienced a drop in resting metabolic rate, meaning they burned fewer calories when not actively exercising or doing other activities. The researchers were able to measure the drop in metabolism using a calorimetry machine. Using calorimetry, they found that their metabolism dropped by 16%, enough to cause significant weight gain over time.

You might wonder whether some factor other than the change in gut bacteria might have caused the slowdown in metabolic rate. To explore this possibility, the researchers transplanted the gut bacteria from the mice fed risperidone to healthy, control mice. Those mice, in turn, experienced a slower metabolism and gained weight. Risperidone seems to cause weight gain by its effect on gut bacteria.

Based on the results, scientists believe changes in gut bacteria can contribute to a slowdown in resting metabolism. This may partially explain the link between gut bacteria and obesity. Of course, it’s not yet proven whether this holds true in humans but scientists will, hopefully, find out. Even so, gut bacteria may affect your body weight in other ways. As mentioned, your gut microbiome affects nutrient absorption and processing too. Some gut bacteria make you super-efficient at taking up the nutrients and the calories in food. The former is a positive but the latter works against you if you’re trying to slim down.

As one of the lead researchers, John Kirby, Ph.D., in the study stated:

“Our research leads to the conclusion that it is probably gut bacteria that are responsible for the calories you burn while you are asleep,”

Some studies even show that when people eat a diet high in sugar and fat, a so-called Western diet, their gut bacteria change too. Rural Africans eat a predominantly plant-based diet and have lots of gut bacteria that ferment carbohydrates. These bacteria produce an acid called butyric acid – a good thing from a health standpoint. Producing more of this acid seems to reduce inflammation in the colon and may lower the risk of colon cancer. That’s one of the benefits of eating a plant-based diet high in fiber.

What happens when plant eaters adopt a Western diet? In a study, when rural Africans began eating a classical Western diet for two weeks, their gut bacteria changed to forms that produce bile acids, a negative in terms of colon health. Their markers for colon cancer also went up. What’s surprising is how quickly gut bacteria change in response to diet and how this might impact the risk of disease and other factors like weight gain. So, gut bacteria are very diet responsive. Feed them fiber and the good ones will stick around.

How’s your gut microbiome? While you often hear about the importance of eating fermented food, getting enough prebiotics in your diet can also promote gut health by feeding the bacteria in your gut more prebiotics. Prebiotics are the type of fiber healthy gut bacteria thrive on.  Humans can’t easily digest prebiotics but bacteria can. Some of the best sources of prebiotics are asparagus, garlic, leeks, onions, unripe bananas, and artichokes.

All in all, most of us don’t eat enough prebiotics or fiber-rich foods in general. So, if you want to cultivate healthy gut bacteria, add more prebiotic, plant-based foods to your diet. There’s no guarantee that it’ll boost your metabolism but it’ll fill you up and may offer other health benefits as well.

IFL Science. “Your Gut Bacteria Don’t Like Junk Food – Even If You Do”