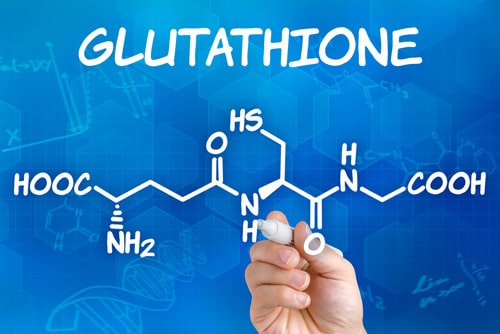 Scientists are still trying to understand what causes us to age and why some people age more slowly than others. One theory is that oxidative damage, over time, damages cells so they no longer function properly. In fact, one strong theory proposes that oxidative damage to the mitochondria, the hard-working organelles inside cells that make energy, contribute to aging and loss of function. Could this explain why our energy level declines as we grow older? Sick mitochondria aren’t as capable of making ATP, a cell’s energy currency.

Fortunately, your cells aren’t powerless against oxidative stress, the formation of cell-damaging free radicals. Your body makes its own powerful form of antioxidant called glutathione. So powerful of a free radical fighter is glutathione that some scientists call it the “mother of all antioxidants.” Glutathione has another vital function as well – it recycles other antioxidants, like vitamin C and vitamin E.

The good news is every cell in your body produces and recycles glutathione. The bad news is you make less of it as you grow older. Some scientists believe it’s the drop in glutathione production by cells that contribute to the age-related decline in physical function and the higher incidence of diseases like type 2 diabetes and heart disease that we experience as we age.

It turns out that glutathione may have evolved to help our bodies deal with cell-damaging toxins in the environment. In a new study, researchers at Oregon State University discovered that a compound called NAC, or N-acetyl cysteine, reduces the age-related decline in glutathione. In a study, pretreating cells with NAC in older rodents made the cells more resistant to stress and damage. N-acetylcysteine is widely available as a supplement and researchers believe it’s safe.

Other Factors That Deplete Glutathione

Although glutathione production goes down with age, other factors can also deplete it. According to Dr. Mark Hyman, head of the functional medicine department at Cleveland Clinic, toxins in the environment, chronic infections, an unhealthy diet, stress, exposure to radiation, and even some medications deplete the body’s supply of glutathione. In fact, overwhelming exposure to toxins and infections can lead to critically low glutathione levels. This, in turn, gives your body less resistance against free radical damage and aging. You’ve probably heard people say they feel like they aged 10 years after going through a stressful time. Depletion of glutathione may have been a contributor.

While we can control some factors that affect glutathione, like diet, it’s not so easy to avoid chronic infections and air pollution. Yet, these factors silently deplete our body’s most important antioxidant defense, glutathione. What can we do to replace it and hang on to what we have?

As the study showed, the supplement NAC holds promise for preventing the age-related loss of glutathione but this research was carried out in animals. It’s still premature to recommend taking N-acetyl cysteine as a supplement. Are there other things you can do to preserve glutathione as you age? Let’s look at a few lifestyle modifications that may help preserve your glutathione.

Exercise is protective against so many health problems. So, it’s not surprising that moderate exercise helps preserve glutathione. Intense workouts actually boost the production of free radicals by placing stress on your body. In response to the stress of exercise, your body’s internal antioxidant defense system jumps into action. Just as your heart and skeletal muscles in your body adapt to the stress of working out, your body’s internal antioxidant defense system adapts and becomes better able to respond to oxidative stress. That’s why it’s not a good idea to consume large quantities of antioxidants prior to exercise. Doing so may block the adaptation and some of the benefits you get from exercise along with it. Just as you expose your muscles to overload to cause them to adapt and grow stronger, exposure to free radicals short-term, due to exercise, makes your body a stronger free-radical fighter.

Deficiencies in certain vitamins make it hard for your body to regenerate glutathione. Two of the most important are the B vitamins, folate, vitamin B6 and vitamin B12. These vitamins participate in a chemical reaction called methylation that’s important for regenerating glutathione. Some people due to genetic variations, are poor methylators and are at higher risk of depleting stores of glutathione under stress. Make sure you’re getting enough B vitamins. Also, make sure you’re also getting enough vitamin C and vitamin E in your diet. Vitamin C, vitamin E, and glutathione work together and support one another.

Whey protein is rich in the amino acid cysteine, a building block of glutathione. A study showed that whey protein boosts the synthesis of glutathione. Unfortunately, the cysteine in whey protein can denature when it’s pasteurized. To get the benefits, you need undenatured whey protein, which is more expensive and harder to find, although available.

Another dietary component that helps supports glutathione, according to Dr. Hyman, is sulfur-rich plant-based foods, like garlic, onions, and cruciferous vegetables. You can’t go wrong adding more of these foods to your diet for a variety of reasons.

What about Taking a Glutathione Supplement?

Taking glutathione in supplement form won’t work since the glutathione is broken down by your digestive tract. So, you have to support glutathione production by supplying your body with precursors, like cysteine, found in undenatured whey protein as well as vitamins that support methylation, like the B vitamins we mentioned. According to a preliminary study, omega-3s helps to preserve glutathione. Of course, you’ll also want to reduce your exposure to stress and environmental toxins as much as possible to avoid making the glutathione your body does make work harder.

Glutathione plays an important role in protecting your body against stress and exposure to toxins. It may also play a role in aging. Make sure you’re eating a nutrient-rich, whole food diet and get regular exercise to help maximize the health of your own glutathione. Exercise is a good kind of stress but find ways to reduce exposure to and manage other types of less healthy stress.

Dr. Hyman. “What is Glutathione and How Do I Get More of It?”

What Role Do Free Radicals Play in Aging?