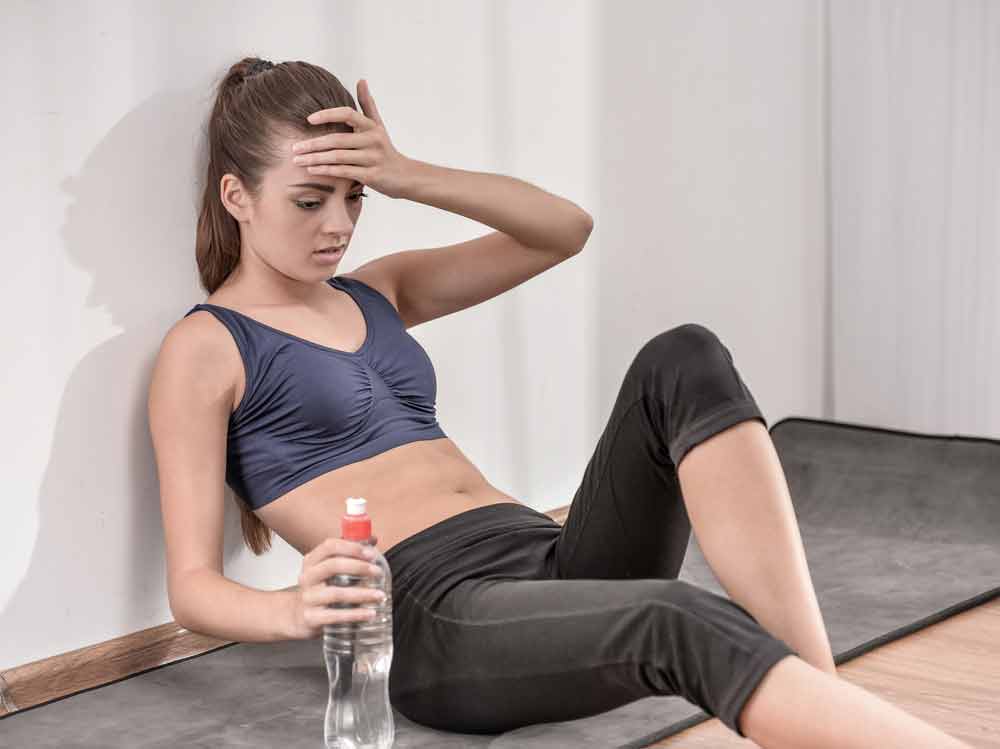 We know that consistency is important when you’re trying to get fit or stay that way. After all, exercise isn’t something you can do once in a while and expect to see results! However, life sometimes gets in the way of getting a good workout. In some cases, it’s time constraints that come between you and a sweat session, but sometimes you’re feeling under the weather. In the name of consistency, you might push through and do a workout despite not feeling up to snuff – but is exercising when you’re sick a good idea? When is it NOT a smart idea to work out when you’re sick?

Exercising When you’re Sick, Take the Day Off or Exercise Anyway?

Whether you should continue exercising when you’re sick or take a break depends on the symptoms you’re experiencing. If you’re running a fever, take the day off. Getting overheated with intense exercise can push your temperature even higher. Plus, having a significant temp is often a sign that you have something more than a minor cold. It could be the beginnings of, for example, influenza.

Another question to ask is whether your symptoms are above or below the neck. If they’re all above the neck, a runny nose, sneezing, and minor fatigue, you’re probably safe doing a light workout, although you might want to take the day off if you’re greatly fatigued.

It’s not a good idea to continue exercising when you’re sick if you have body aches as you won’t be able to put forth your best effort when your muscles ache and feel weak. Plus, muscle aches can often be a sign of the flu. Likewise, if you’re having diarrhea or vomiting, skip the workout as sweating will increase your risk of dehydration, which you’re already at higher risk of if you have these symptoms.

Even if your symptoms suggest exercise is still a go, consider modifying your session if you aren’t feeling 100% when exercising when you’re sick. When you’re under the weather it isn’t the time to do a high-intensity workout or to engage in a long, endurance workout. Likewise, if you’re lifting weights, lighten the intensity. Use lighter resistance than you’re accustomed to and do higher reps, more of a muscle endurance workout than a hardcore strength training routine. Even if you decide not to do a full workout, stretching exercises or a yoga session might help you feel a bit better.

The good news is having the common cold doesn’t appear to impact aerobic fitness. In fact, researchers carried out a study where they infected healthy men and women with a virus that causes the common cold. Beforehand, they tested their aerobic capacity and lung function of the participants so they had a baseline for comparison. As expected, after direct exposure to the virus, all the participants developed the common cold. At the peak of their symptoms, the researchers asked the participants to run on a treadmill. Even though the participants ran at a moderate to intense pace, their aerobic capacity and lung function weren’t negatively affected. However, this was only a head cold. The results may have been different with a respiratory infection that impacted the lungs, like bronchitis.

See How You Feel Once You Start

In some cases, it might be hard to decide whether to take the day off or simply do a lighter workout. A general rule of thumb is to listen to your body if you don’t feel well. Missing one or a few workouts because you’re sick won’t make or break your progress long term. Sometimes we get so obsessed with trying to reach a goal that we throw common sense aside. It takes a few weeks to lose significant gains in aerobic capacity and even longer to lose strength and hypertrophy gains. Remember, the cardinal rule when you’re sick is to get more rest. It’s okay to take a break and get back into the swing of things when you feel better. So, when in doubt, skip or go light.

Can Exercise Reduce the Risk of Respiratory Infections?

Here’s the good news. Exercising regularly may actually help you get sick less often. Studies show that people who regularly perform workouts at a moderate intensity have fewer reported respiratory symptoms. However, in animal studies, intense exercise during the time an animal has viral respiratory symptoms is associated with greater morbidity and mortality. So, exercise in moderate doses may protect against viral respiratory infections but intense workouts when you’re sick isn’t a wise choice.

How might exercise be protective against viral respiratory infections? Some evidence suggests that moderate exercise balances the immune response to pathogens, creating a sufficient response to fight the virus without triggering damaging inflammation. However, training too hard for long periods of time without adequate rest may actually increase the risk of developing respiratory symptoms related to viruses. Studies show that marathon runners have a higher incidence of colds for two weeks after the big event, so moderation is important.

Other Ways to Lower Your Risk of Viral Respiratory Infections

Don’t forget about the common-sense stuff for warding off colds and respiratory viruses. Wash your hands for at least 10 seconds several times a day. Ten seconds is the minimum amount of time, based on a recent study, you need to scrub your hands to remove bacteria and viruses. The Centers for Disease Control and Prevention still recommends 20 seconds.

Contrary to popular belief, water temperature doesn’t matter. Cold water kills bacteria and viruses as effectively as hot water, as long as you’re using soap. The other commonsense measure is to avoid people who are coughing and sneezing as much as possible. Make sure you’re eating a nutrient-rich diet and are getting enough vitamin C and vitamin D from sun exposure. Don’t skimp on sleep. Lack of sleep dysregulates your immune system and increases susceptibility to viral infections. Take these measures to stay healthy this winter even when cold season is at its peak.

Do Hand Sanitizers Lower the Risk of Catching the Flu?