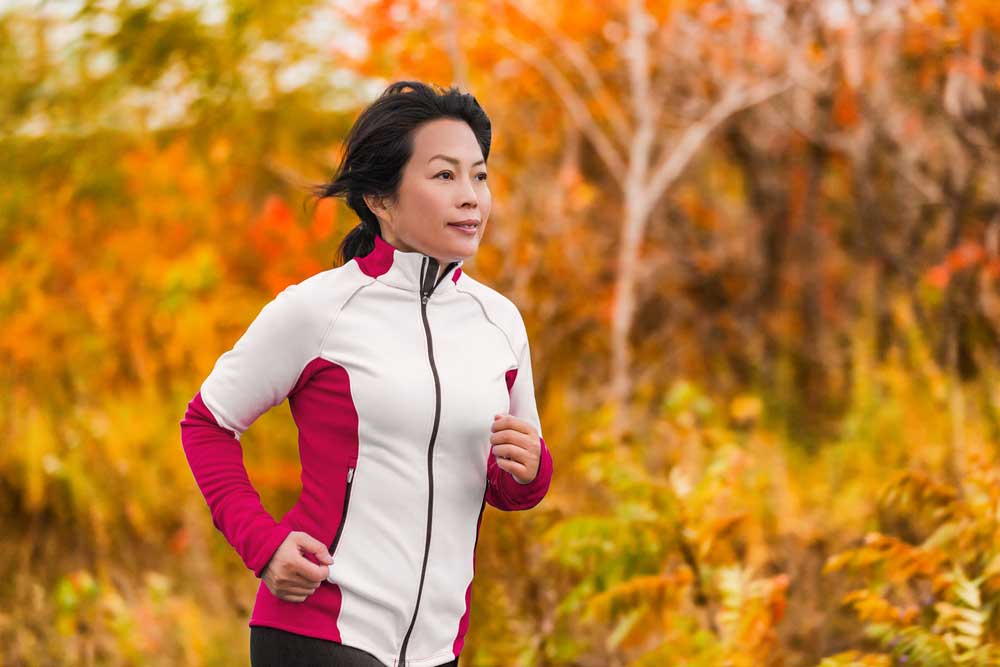 Menopause, far from being a health condition or disease, is a gateway into the second half of life, a life filled with opportunity and new experiences. It’s a natural part of the saga we call life. Still, some women approach the transition with trepidation and worry that they’ll develop symptoms, like hot flashes and mood swings that interfere with their daily life. Fortunately, some women go through menopause with few or no symptoms.

What makes women who breeze through menopause so lucky? Luckily, there’s some evidence that exercise can make the transition easier and even reduce some of the symptoms of menopause. For one, exercise is a mood lifter. It also may enhance sleep and reduces anxiety, a symptom that some women experience during menopause. Whether exercise reduces hot flashes is unclear. Some studies show benefits while others do not. Still, we need exercise more than ever after menopause to preserve bone and prevent age-related loss of muscle and strength.

You might wonder what role exercise plays in the timing of menopause? The average age at which a woman enters menopause is around 51 years of age, although there’s a lot of variability. Some women enter menopause in their 40’s and others continue to menstruate into their 60’s. Do women who exercise experience an earlier or later menopause?

A recent study looked at this issue. In the study, researchers scoured through data on 107,275 women as part of a larger study called the Nurses’ Health Study II. The study followed the women for 22 years. The advantage of this type of study is that it’s prospective, meaning researchers tracked the women going forward rather than looking back into the past. Plus, it was a large study, which increases the likelihood of the results being valid. Prior studies suggested that exercise might increase the risk of an earlier menopause while other studies showed the opposite. So, until now, there wasn’t a good, large prospective study looking at exercise and its effect on menopause.

During the study, the women filled out new questionnaires about their lifestyle habits, health conditions, activities and more every two years. The researchers also controlled for other factors that influence the age at which a woman goes through the change of life such as health conditions, age, race, height, weight, ethnicity, history, pregnancies, history of hormone use etc. To help standardize the exercise they did, they used metabolic equivalent scores, or METs to calculate MET-hours per week based on how intensely the women exercised, how often, and for how long.

However, there are other factors associated with going through menopause at an earlier age. For example, smoking as an adult and being exposed to secondhand smoke is correlated with a two times higher risk of entering menopause early. Note that in the study, before the age of 45 was classified as an early menopause. However, most sources characterize menopause before age 40 as an early or premature menopause.

Genetics is a strong factor that influences when you go through the transition. If your mother went through menopause early, there are 6X greater odds that you will too. Being underweight or having surgery to remove an ovary prior to menopause also increases the odds. Even the loss of one ovary, in the setting of a fully functional one, raises the risk. Being underweight, smoking, and removing an ovary all lower the body’s natural estrogen level. This may partially explain why menopause happens early in people with these risk factors.

Other Factors That Can Trigger an Early Menopause

Certain medical conditions also increase the likelihood of an early menopause. For example, undergoing chemotherapy or radiation for cancer can damage ovarian tissue as can some autoimmune diseases. In addition, women who have epilepsy often go through menopause up to a decade earlier.

Less established is an association between early menopause and exposure to toxins. We know we’re living in an increasingly polluted environment and that chemicals in food and personal care products may have an impact on hormones, including sex hormones, like estrogen, that control reproductive health. A study carried out by researchers at the Washington University in St. Louis found a link between early menopause and exposure to certain toxins, including plastics and phthalates. In fact, women with higher levels of these chemicals in their bloodstream entered menopause, on average, 2 to 4 years early. We can’t completely avoid toxins, but choosing organic foods, limiting exposure to plastic, and selecting personal care products without questionable ingredients may help.

The factors that impact when you enter menopause are multifactorial and are partially related to lifestyle factors and partially genetics. Exercise doesn’t seem to be a major influence on the age of menopause. On the plus side, exercising during perimenopause and menopause may help the transition go a little smoother. At the very least, exercise is important for weight control during menopause and it helps lower the risk of a variety of health problems that become more common during midlife. So, keep lacing up those exercise shoes!