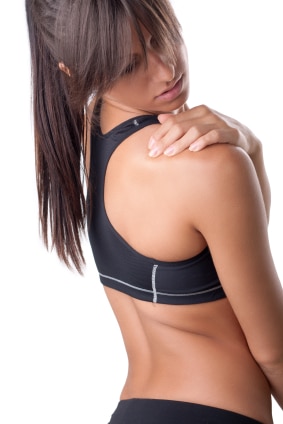 Delayed onset muscle soreness (commonly known as DOMS) will be familiar to anyone who engages in intensive exercise. Beginning at around 24 hours after the exercise and peaking after a further 24-48 hours, DOMS is a dull, aching pain which is only felt when the trainee utilizes the affected muscles. Although it’s perfectly healthy and normal to suffer from this soreness, there are ways to mitigate the painful after-effects of exercise.

It is not yet known exactly how DOMS arises. However, the leading theory suggests that the eccentric portion of the exercise (that is, when a muscle is extended; for example when a trainee lengthens their arm during a bicep curl) causes a series of microscopic tears in the muscle fibers. These tears and the accompanying inflammation cause the pain which is felt over the next few days. The occurrence of DOMS, therefore, is not a negative thing – in fact, it shows that the trainee’s workout regime has been testing their muscles to the limit. That doesn’t mean, though, that a training session has been ineffective if soreness is not present over the following few days.

DOMS represents an adaptation to a new form of exercise. Let’s say a trainee, John is a bodybuilder. Every workout, he performs strength-based exercises for 3 sets of 5-8 repetitions. After these workouts, he experiences little or no soreness. If John were to change his normal program for one day and instead take a lighter weight and perform 50 repetitions, he would undoubtedly experience substantial soreness. However, this would not mean that his body is adapting in a way that is useful to him – he wants to get big and strong, not build up his muscular endurance. His sets of 50 repetitions will not aid him in achieving his goals, but he still suffers from DOMS. The same would be true if we reversed the facts – a marathon runner performing heavy squats would be sore the next day, but those squats wouldn’t help him run for longer.

Although current research does not indicate with certainty the precise mechanism by which DOMS is caused, it does provide trainees with a wide variety of possible remedies. One solution, which has found great popularity in bodybuilding circles, is the use of branch chain amino acids (BCAAs). BCAAs are a group of three amino acids – leucine, isoleucine, and valine – which are required by the body for muscle regrowth. Recent research has shown that administration of BCAAs can substantially reduce muscular soreness in affected trainees. These acids can be bought quite cheaply as pills or powder from any fitness store.

An alternative method which can be used to reduce soreness is to encourage blood flow to the affected muscles. This can be done in any number of ways – massage, further light exercise, steam rooms, and alternating hot/cold blasts in the shower. All of these practices stimulate blood flow to the muscles, transporting the nutrients required to repair the tears caused by intensive exercise, and so alleviating any resulting pain.

Lastly, the trainee could choose to take a non-steroidal anti-inflammatory painkiller (NSAID), such as Advil. These analgesics work by discouraging the inflammation which is believed to contribute to DOMS. Research shows some support for the conclusion that NSAIDs help with post-exercise soreness, but trainees should be aware that it has been shown conclusively that they also have a negative effect on muscular growth and adaptation.

It should be noted that stretching, whether before or after exercise, has been found to have no effect on the occurrence of DOMS in the relevant muscles. In fact, especially stressful stretching has been shown to cause soreness in the absence of exercise.

Though DOMS is perfectly healthy, it is not a conclusive indicator of an effective exercise regime. Trainees who wish to avoid it may adopt any one of numerous techniques to alleviate or even prevent its manifestation. Hopefully, further research that this topic has inspired will give a more clear picture of its causes and treatment in the near future.

Exercise Recovery: Can the Way You Recover from Exercise Impact Your Fitness Gains?