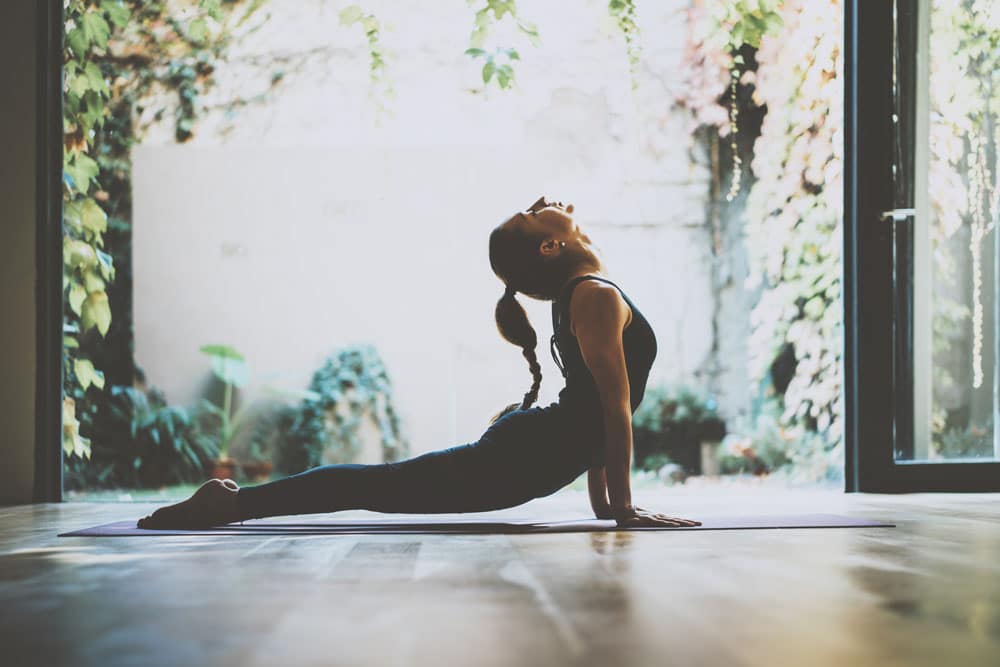 One benefit of aerobic exercise is the impact it has on brain health. We think of aerobic workouts as being heart-healthy, but it’s also good for your brain. Research shows that people who do regular aerobic exercise have more volume in areas of the brain involved in memory and cognitive function, including the hippocampus and the prefrontal cortex of the brain.  Plus, other research suggests that regularly boosting the heart rate through aerobic training lowers the risk of dementia Who isn’t concerned about keeping their brain healthy as they age? Just as our muscles atrophy with age, we lose volume in our brains too.

Could yoga have the same benefits for brain health as aerobic exercise? We know that yoga is a good stress reliever. Plus, it can improve muscle endurance, balance, and flexibility. Yet, yoga doesn’t raise the heart rate for a sustained time like aerobic exercise. Despite the lack of a significant heart rate boost from yoga, a new study suggests that it is a brain-healthy activity too. In fact, researchers are exploring whether yoga has similar brain health benefits as aerobic workouts.

What New Research Shows about Yoga and Brain Health

A recent review of 11 studies published in the journal Brain Plasticity looked at the link between the practice of yoga and brain health. The goal of these studies was to compare brain volume before subjects began practicing yoga and after 10 to 24 weeks of practicing Hatha yoga.

Rather than using memory tests and other indirect markers of brain health for this study, the researchers analyzed studies that used brain imaging to look at the volume in various regions of the brain. They were surprised to find that the same portions of the brain that “beef up” in response to aerobic exercise also gained volume after weeks of practicing yoga. For example, the subjects who did yoga had a larger hippocampus than those who didn’t.

A boost in the size of the hippocampus is significant because it is a part brain involved in cognitive function and memory. If you looked at the brains of people with Alzheimer’s, you would see shrinkage in this area. The researchers also found an increase in other portions of the brain in response to the practice of Hatha yoga. For example, the subjects who practiced yoga had more volume in the prefrontal cortex of the brain, an area involved in making decisions and carrying out tasks. Plus, they had a larger amygdala, a part of the brain linked with the regulation of emotions. These are similar to the changes that occur in the brain of people who do regular aerobic exercise.

Other research shows that yoga practitioners have more volume in portions of the brain called the somatosensory cortex, the visual cortex, and the superior parietal cortex. So, yoga may have a significant impact on brain volume, and it may exert its benefits in various parts of the brain.

Does Yoga Have the Same Benefits as Aerobic Exercise?

Although you may get a boost in brain volume in key parts of the brain when you do aerobic exercise or yoga, the mechanism by which each boosts brain health may differ. One theory is that yoga improves emotional control and helps lessen stress and anxiety. That may explain some of the brain changes that people get when they do yoga. Studies show that emotions physically affect the brain too. For example, studies show people with clinical depression have reduced brain volume in portions of the brain. Plus, some studies show that yoga reduces levels of cortisol, a stress hormone.  You would expect a drop in cortisol to be favorable for brain health too. In fact, research shows that chronic stress can disrupt nerve cells in the brain and may contribute to loss of brain volume. For example, in animal studies, chronic stress leads to shrinking of the prefrontal cortex of the brain. Therefore, yoga may benefit brain health by increasing mindfulness and by reducing the activity of the “fight or flight” portion of the nervous system.

Yoga is a not replacement for aerobic exercise, but it may have some of the brain health benefits that cardio workouts have. Yoga boosts brain volume in key areas involved in cognition, but an aerobic workout has some health and fitness benefits that you don’t get from the practice of yoga. For example, aerobic exercise boosts aerobic capacity, the ability of your body to sustain sub-maximal exercise. When you have greater aerobic capacity, you can run or cycle longer at a moderate intensity before fatiguing. So, you have more stamina.

Aerobic exercise also boosts levels of brain-derived neurotrophic factor (BDNF) a growth factor that helps the brain form new connections between nerve cells. Some experts liken BDNF to fertilizer for the brain. How aerobically fit you are says something about your health too. Higher aerobic capacity is a marker of cardiovascular health and fitness. Studies even show that greater aerobic fitness is a marker for longevity.

Of course, you don’t have to choose between aerobic exercise and yoga for the health of your brain and heart. Why not include some of both in your fitness routine? Don’t forget about strength training. You need muscle strength and power capabilities for the long haul too, so keep your workouts balanced. For a complete and balanced workout routine, include flexibility, agility, and balance training too. It all matters for the health of your brain and for your health overall.

Want to Sharpen Your Memory? Try Flexing Your Muscles