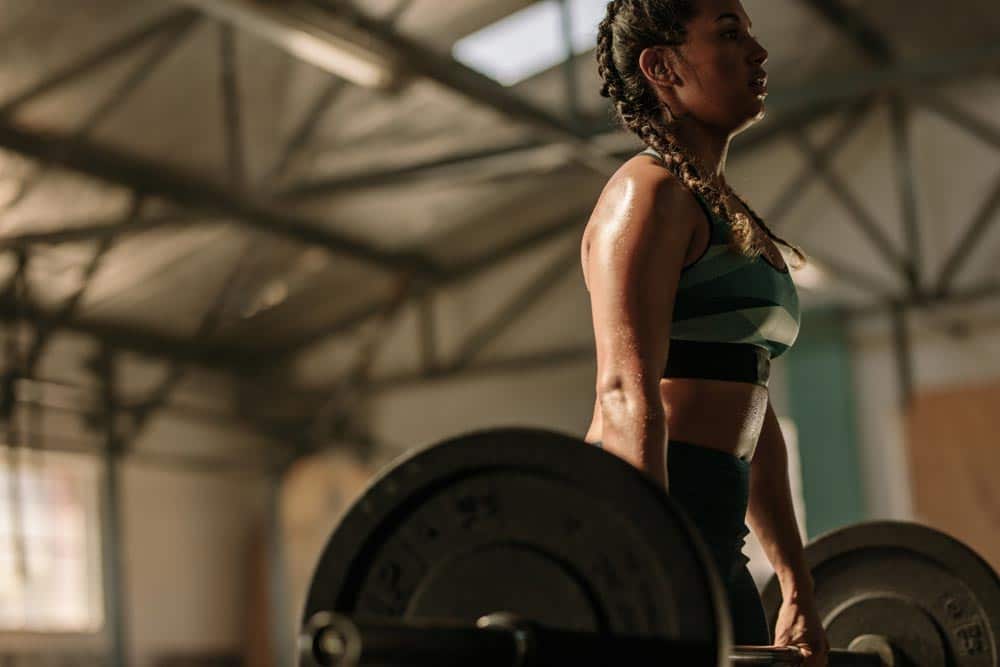 You’ve probably noticed that firm, round buttocks are all the rage. But, not everyone has them naturally. In fact, buttocks tend to become flatter and less defined with age. However, some of this change is due to inactivity and too much sitting. As physical therapists point out, when you sit too much, your glute muscles” shut down.” Not only does this lack of glute stimulation contribute to lower back pain, it does nothing to improve the aesthetics of your backside. But you can change that!  You won’t alter the shape of your buttocks by doing hours each week of cardiovascular exercise. It’s strength training that will help you meet your goal.

A deadlift is an exercise where you lift a barbell off the floor. With a conventional deadlift, you set up for the exercise by positioning your feet roughly shoulder-width apart. The barbell should be as close to your shins as possible. To do the movement, bend at your hips and knees and reach down and grab the barbell with your hands about shoulder-width apart. Then, stand straight up as you lift the bar off the floor. Maintain a neutral spine the entire time. The conventional deadlift requires a pronounced hip hinge and it’s a good exercise for improving the ability to hinge at your hips. How about your back? By keeping the bar closer to your body, you can reduce the stress on your back while still strengthening it.

A study published in Exercise Science and Fitness, researchers asked 21 men to do conventional and Romanian deadlifts while they measured electrical activity in the following muscles: biceps femoris, rectus femoris, and gluteus maximus. The men used a resistance equivalent to 70% of their one-rep-max. The rectus femoris is a muscle in the quadriceps that flexes the hip. The biceps femoris muscle is a hamstring muscle that bends the knee and moves the hips posteriorly. As you probably know, the gluteus maximus is the large muscle that gives your buttocks their shape and also aids in extending and turning the hip outward. When your glutes are strong, you can generate more power and have some protection against lower back pain.

Another Deadlift Variation for Your Glutes

A single-leg Romanian deadlift is an effective way to target the glutes because you’re working one glute at a time and can focus on the side you’re working. It’s also an effective variation for eliminating glute weakness on one side. Plus, single-leg Romanian deadlifts add a balance challenge and challenge your core more because your core has to stabilize as you work one side. In fact, according to EMG data from the Mike Reinold website, the single-limb deadlift and single-leg squat are among the most effective at activating the gluteus maximus, the muscle that gives your glutes their shape. So, there are definite advantages to including single-leg deadlifts in your glute routine.

Deadlifts are a compound exercise that works your glutes, along with many other muscles. It’s ideal for developing greater functionality, improving your hip hinge, and building back strength. Although you activate your glutes when you deadlift, EMG studies show they don’t activate these large muscles as much as hip thrusts, another exercise you should include in your routine. Hip thrusts are especially effective for building definition in the upper glutes. For variety, include exercises like glute bridges, donkey kicks, quadruped hip extensions, lunges, and squats. Doing a combination of these exercises will work your glutes in different ways and maximize their growth. Glutes aren’t built from deadlifts alone!

Deadlifts should be part of your glute training because they’re a compound exercise that improves functionality and works multiple muscle groups. However, they aren’t the BEST exercise for targeting your glutes. Hip thrusts activate the glutes in a more focused manner. But, ultimately, you should do a variety of exercise that work your glutes, not just deadlifts. But, don’t shy away from deadlifts either! They work too many muscles and are one of the best exercises for strengthening your back.

MikeReinold.com. “The Best Exercises for the Gluteus Maximus and Gluteus Medius”

5 Powerful Reasons to Include Deadlifts in Your Fitness Routine

Glute Power! Why You Need Hip Thrusts in Your Routine

Why Deadlifts are Good for You

One thought on “Conventional Deadlifts vs. Romanian Deadlifts: Which Activate the Glutes More?”