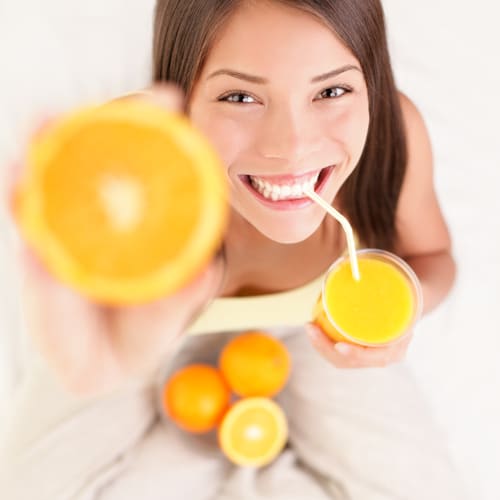 When some people feel the sniffles coming on, they open up a bottle of vitamin C. There’s no proof that vitamin C prevents or shortens the duration of colds, but it is important for a healthy immune system. Now there’s another reason to enjoy more vitamin C-rich foods. A new research study published in the journal Nutrition suggests that vitamin C makes exercise feel easier. That could help you push a little harder.

Researchers at Arizona State looked at the benefits supplementing with vitamin C had on exercise performance. Twenty obese adults participated in this month-long study. They were divided into two groups. One group took a 500 milligram vitamin C supplement daily during the study while the other group took a placebo. Both groups ate a standard, calorie-control diet and walked an hour on a treadmill during the first and last week of the study at an intensity of 50% of their V02 max.

The results? Both groups lost similar amounts of weight, but the group that took a daily vitamin C supplement had a lower heart rate during exercise after supplementing with vitamin C than the control group did. They also had a lower rating of perceived exertion, even though they worked out at the same intensity. In other words, participants who took vitamin C found their workout to be easier, they experienced less fatigue and their heart rate was lower during their workout.

Keep this in mind before reaching for a bottle of vitamin C to make your workout feel easier. This was a small study involving obese people, and the participants didn’t work out at a high intensity. In addition, past studies have questioned the wisdom of taking antioxidant supplements like vitamin C and vitamin E because it can potentially block some of the health benefits of exercise.

Do Antioxidant Supplements Block the Benefits of Exercise?

One of the health benefits of exercise is it improves insulin sensitivity. When you have better insulin sensitivity, you don’t have to produce as much insulin in response to a meal. That’s a good thing because insulin promotes fat storage, and higher insulin levels are linked with other health problems like heart disease and type 2 diabetes.

According to research carried out at the Joslin Diabetes Center and Harvard Medical School, the production of free radicals by muscle cells during exercise is what causes this improvement in insulin sensitivity. When you take antioxidants in supplement form, you block this response and your insulin sensitivity doesn’t improve to the same degree. Free radicals generated by exercise in the short-term seem to benefit your body by causing it to adapt to the stress of working out. In a sense, free radicals aren’t all bad.

If vitamin C really does reduce the perceived exertion of a workout, that’s a good thing, but the best way to get this antioxidant vitamin is by eating foods naturally rich in vitamin C. When you eat an orange, you’ll get almost 70 milligrams of vitamin C. Citrus juice is also a good source, but it contains more natural sugar and less fiber than the whole fruit. Contrary to popular belief, oranges aren’t the best source of vitamin C. Guava fruit has more than twice the amount of this antioxidant vitamin with 180 milligrams per half cup of this exotic fruit. Other good sources are red peppers, kiwi fruit, broccoli, chili peppers, Brussels sprouts, lychee, and papaya. These foods also have other healthful phytochemicals you won’t get when you take a supplement.

Does Vitamin C Mimic Some of the Effects of Exercise?